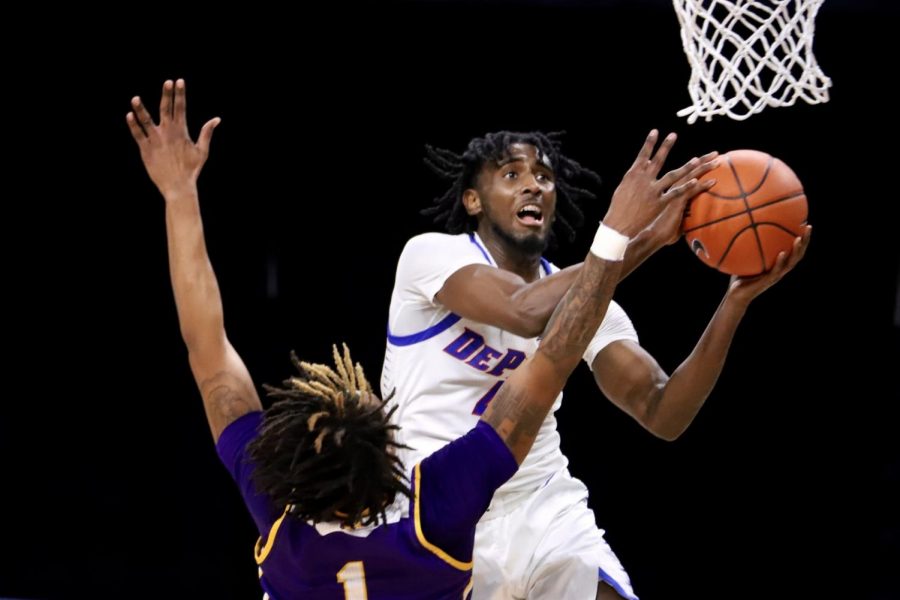 DePaul junior guard Javon Freeman-Liberty goes up for a layup against Western Illinois on Wednesday at Wintrust Arena.

DePaul had to wait almost a month to begin its 2020-21 season because of three different pauses causing the team to cancel or postpone the first 10 games.

But the Blue Demons finally got to play a game against Western Illinois on Wednesday at Wintrust Arena, and DePaul didn’t look like a team that missed the first month of the season and had three key players missing the season opener.

Head coach Dave Leitao’s team got off to a fast start and never looked back in a 91-72 win over Western Illinois. Both of these teams were supposed to play each other on Nov. 25 but had to initially cancel because of Covid-19 protocols in DePaul’s program.

“I have to say, with the limited roster, how doggone proud I am of these guys,” Leitao said after the game. “Seven and a half players, two practice days and the last month for them has been, to say, challenging is a severe understatement. To come out today and play as organized as we did with very, very limited practice time speaks volumes to who they are as young men.”

The Blue Demons were missing senior forward Jaylen Butz, junior forward Darious Hall and sophomore forward Romeo Weems for the season opener, with Hall and Weems out due to Covid-19 safety protocols.

As a result, DePaul only had eight scholarship players available on Wednesday, with five players making their debut. Junior guard Charlie Moore was the only returning starter, with transfers Javon Freeman-Liberty and Ray Salnave getting inserted into the lineup right away.

The other two starters included sophomores Nick Ongenda and Oscar Lopez Jr. It was the play of Ongenda that stood out early on as he was active both on offense and defense. The 6-foot-11 forward started the game with six points and five blocks, setting the tone for his team on both ends.

DePaul’s defense was particularly active in the first 10 minutes as they made it uncomfortable for Western Illinois to get any rhythm. The Blue Demons began the game by going on a 15-4 run as they were able to get out in transition and create easy shots in the paint.

“I look at the first four minutes, our defensive intensity, our scouting report report defense and are we doing the things that we have talked about that we practiced over the last couple of days and I thought that was really good,” Leitao said. “It led to some rebounds and some missed shots, and I thought our transition offense was really good. We got off to a 12-2 start and if we continue to run, I think the danger that we pose is that we have multiple decision makers and multiple ball handlers.

But the offense started to slow down towards the middle of the first half as DePaul went on a three-minute scoring drought and had six turnovers in a five-minute stretch. The Leathernecks were able to cut into that early deficit and got within three, 22-19, with 5:46 to play in the first half.

DePaul, however, responded with its own 15-0 run to stretch its lead out to 18 and the visitors were never able to get the deficit down into single digits. Freeman-Liberty looked comfortable and confident in the first half as he added 12 points, grabbed six rebounds and dished out three assists.

“I have kind of an advantage over small guys so I could see a lot,” Freeman-Liberty on his height advantage when having the ball. “But I base my off to get the team involved first, so I put my teammates first and then me.”

Moore, who led the Blue Demons in scoring and assists last season, was again the driving force to begin this season as he led the team with 22 points on 8-of-15 shooting.

“It was a relief off the team’s back,” Moore said on finally being able to play a game. “Having several games canceled, I’m seeing other teams play. My team was just anxious to get out there and play and show the work that we have been putting in.”

The Blue Demons finished the first half taking a 44-25 lead into the break with the offense shooting 58.6 percent from the field and 41.7 percent from behind the arc.

DePaul’s domination continued in the second half as the team was able to increase its lead all the way up to 26 multiple times. The Blue Demons had one stretch in the half where they made eight consecutive shots.

Eight different players scored in the second half with Lopez Jr. leading the way with nine points. Freshman Kobe Elvis also made his debut on Wednesday and had a solid night with 12 points and four rebounds.

Western Illinois had a much more productive offense in the final 20 minutes of the game as they scored 47 points on 18-of-36 shooting. Freeman-Liberty finished the game with 19 points, eight rebounds and six assists.

He was the Hoyas’ head coach for 27 years and was the first African-American coach to win a major collegiate championship in basketball when he led Georgetown to the 1984 national title.

“I was in my mid-20s when his teams were going to the Final Four,” Leitao said. “The first Final Four I went to was the year after they had won it in 1985 in Lexington when they lost to Villanova. I was 25 years old in awe of watching what Georgetown was. If you remember back that far, starter jackets in every community was because John Thompson made Georgetown the place to be. Then having the opportunity to compete against Georgetown and he, getting to know him as a coach or an activist meant something to my life.

“So, his legacy goes beyond measured for me and how I respect what he’s done for history and the game of basketball. So to be able to honor him in that way and I’m glad Georgetown and Patrick Ewing made this more public so we can all express — as I’m doing right now — our appreciation and love for a man that left so much to the life not only in the sport of basketball, but most importantly, to human rights and for those less fortunate. I owe a debt of graduate as a mentor that he was to all of us to what he meant to this game and our lifetime.”

DePaul is going to be back in action on Dec. 27 when they open up Big East play at Providence. The Blue Demons will then travel to UConn on Dec. 30 and then to St. John’s on Jan. 2.