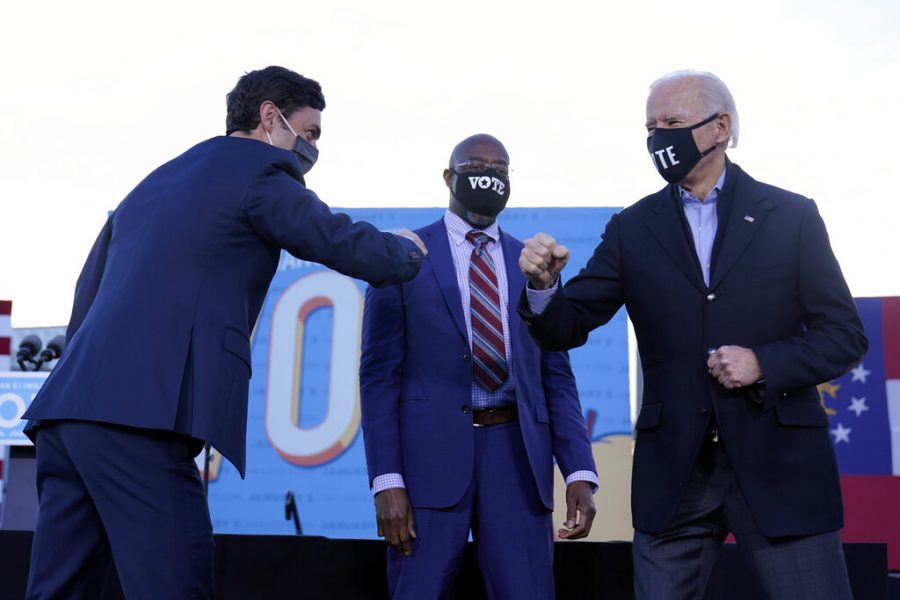 After months of a contentious political battle in Georgia, Democrats Jon Ossoff and Raphael Warnock won Georgia’s two Senate runoffs. The Democratic wins in Georgia decisively granted the party control of the Senate with a 50-50 split in which Vice President-elect Kamala Harris may act as the tie-breaking vote.

Georgia has garnered national attention after the state was effectively flipped in the November election in which President-elect Joe Biden beat incumbent Donald Trump by more than 11,000 votes. This win signifies the first Democrat to take Georgia since Bill Clinton in 1992.

The runoffs in Georgia, in which Black voters were the determining force behind both Democratic wins, have a darker origin in diluting the Black vote. In 1963, Rep. Denmark Groover introduced a proposal to apply runoff election rules to local, state and federal offices after being defeated in an election for the House in 1958. Groover ultimately blamed the “bloc” vote for overwhelmingly supporting one candidate.

Groover later confirmed that his use of the term “bloc vote” was a racial euphemism for Black voters.

Christina Rivers, an associate political science professor at DePaul University, said the implementation of the runoff system seems to not only have been a direct attempt at discriminating against Black voters but was a response to the Civil Rights Movement.

“It is fascinating and disappointing and disgusting that that still exists in Georgia’s laws and they have not gotten rid of it yet,” Rivers said. “And that’s because I think a lot of people have forgotten the racist motivations behind those types of laws just like most of the felony disenfranchisement laws in the South also have racist motivations.”

Despite the racialized intentions of the runoff system, Black voters proved to be a reckoning force in these races in which voting turnout in predominantly Black counties was uncharacteristically high. According to data reported by The New York Times, turnout reached 93 percent of the November election numbers in areas in which Black voters represented at least 80 percent of the electorate.

Much of the credit for the increased voter turnout can be attributed to Stacey Abrams and the work of other advocates working to increase voter registration and motivation. Other advocates that worked in various voting projects in the state include Helen Butler, Nsé Ufot, Deborah Scott and Tamieka Atkins.

In the 2020 election, 1.2 million Black Americans voted in Georgia compared to 500,000 in the 2016 election, according to the Georgia Legislative Black Caucus. Of that number, the organizers in Georgia helped to register 800,000 new voters since Abrams lost the governor’s race.

The “herculean” efforts of these women, as Rivers referred to it, resulted in the mobilization of key demographics that helped to flip Georgia in both the presidential election and the Senate runoffs.

“I think voters are going to expect a lot more sweeping changes than simply restocking independent regulatory boards even though I think that will have a pretty significant impact on policy,” Madonna said.

In addition to the challenges in a highly polarized Congress, Democrats may also face difficulty in uniting their own party on the biggest policy items in Biden’s agenda including health care, climate change and reinvigorating the economy.

Wayne Steger, a political science professor at DePaul University, said that confronting a large economic crisis will be a significant challenge for Biden’s administration.

“Biden will have a very hard time pushing a major economic stimulus package, without raising taxes a lot, which will be unpopular and could lead to big losses in the 2022 midterm elections,” Steger said.