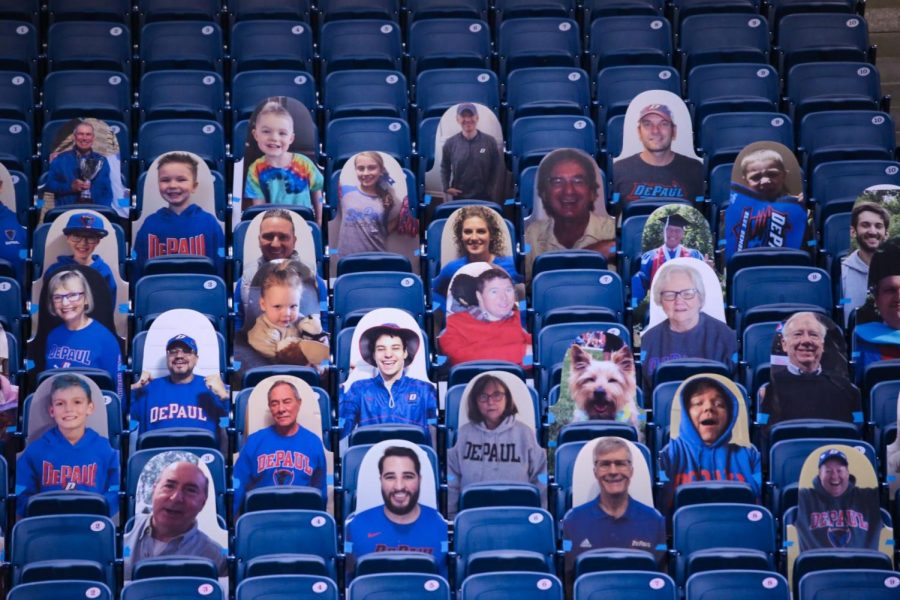 The ball is thrown in the air to start the game between DePaul and Villanova on Jan. 4 at Wintrust Arena. Caption: DePaul has put in cardboard cutouts of fans for home games this season.

One of the major consequences that the Covid-19 pandemic has had on sports is the loss of fan attendance at games.

Most arenas around the country are not allowing fans to attend games to discourage the spread of the virus, which has forced sports teams to play behind closed doors for the past six months.

Even though all sports are suffering with no fans in attendance, no sport misses its fans more than college basketball.

College basketball is known for its student sections, boisterous fans, different chants and rituals and simply the difficult environment fans can create for the road team.

This season, however, all of that has been replaced by cardboard cutouts of fans, the sound of the basketball clanking onto the rim, fake crowd noise being pumped into broadcasts and the ability to hear coaches barking out plays to their team.

“It’s definitely different,” DePaul women’s basketball head coach Doug Bruno said. “We really love our fan base here at DePaul, and it’s a rabid group and we wouldn’t have succeeded without them here. And yet you just kind of adjust and it becomes a preseason scrimmage if you will, and the games are more important than scrimmages, but we do play preseason scrimmages against Division I teams and that’s basically what we are dealing with and what we have to deal with every day.”

While it’s been a good idea to put cutouts in the seats to replace fans and generate fake crowd noise, they still don’t come anywhere near to replicating the buzz and excitement that fans in an arena create.

But that’s part of the current reality of sports: You either play with no or limited fans or you don’t play at all.

Already this season, teams who have had great success in the past by selling out their stadiums haven’t been as dominant on their home courts as they’re accustomed to. For example, Duke’s men’s basketball team came into this season losing only one non-conference home game in the last 20 years. This season, with no fans in attendance at Cameron Indoor Stadium, the Blue Devils lost two non-conference home games.

Basketball games experience a lot of ebbs and flows throughout the 40 minutes and the players’ play can be influenced by the energy that fans provide. Now, players have to generate their own energy and push themselves on without that external force cheering for them to win.

DePaul freshman guard Darrione Rogers has yet to experience a college basketball game with fans in an arena. But she said that in high school she would feed off of the fans’ energy to go and make plays.

“In high school, I was a player that was very involved with the crowd when I was to execute or do something well,” Rogers said. “So now not having fans to get energy off of is something we all have to just come in with high energy and a motor. So, that’s the main difference between not having fans [in attendance].”

While home teams particularly suffer without fans, some of the pressure that road teams face is now taken away this season. The pressure that fans can put on the visitors can force them into turnovers, taking bad shots and making poor decisions in close games.

Now? It’s more of an even playing field because both teams are facing the same circumstances.

“We definitely miss the support, just seeing the same familiar faces, so that’s a big adjustment,” DePaul junior guard Sonya Morris said. “But I will say personally, I don’t want to talk for my team, but personally it takes some of the pressure off not having fans — even though it’s still being recorded and live streamed. So, I think the pressure of the fans is taken away. Also, the opponents’ fans get crazy sometimes, it’s a good and it’s a bad thing.”

There is still one home court advantage that teams have this season, however, according to Bruno. It’s the comfort and familiarity of shooting at the same rims, opposed to having no practice shooting on opposing teams’ baskets.

“If you analyze all of our great team sports, you know football is played in the trenches and there’s not a lot of background in the trenches; the skill players are still getting the ball and running it in tight spots,” Bruno said. “In basketball, you still have to throw a ball through a small cylinder from a large, long distance away. Even in Major League Baseball, there are different home backgrounds, but most baseball parks are still built for the hitter not to have white t-shirts on the background and they have at least a green space for the hitter to have a background that’s got some similarity to it. Whereas in basketball, there still is definitely a home court advantage based on the ability of shooters to make baskets because they shot more shots there and they are more comfortable in those places.”