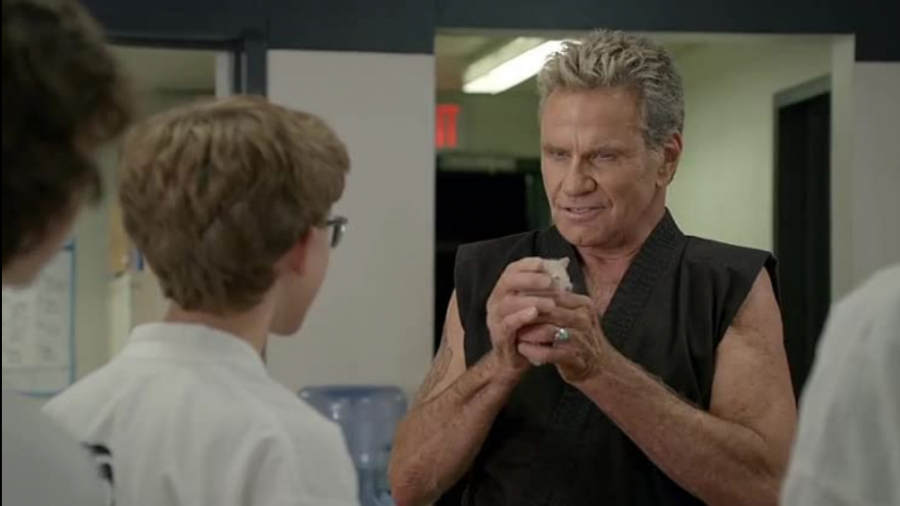 Even after nearly forty years — including four films, two remakes, and now three seasons of television — the “Karate Kid” universe is still going as strong as ever, with season three of its spinoff,“Cobra Kai,” streaming on Netflix now. The show’s latest season has had somewhat of a rocky path. After being commissioned by and produced for Youtube’s paid streaming service, Youtube Premium (originally called Youtube Red when “Cobra Kai” was first released), the show made a sudden jump to Netflix.

Co-creators Josh Heald and Robert Mark Kamen were interested in pursuing at least a fourth season and possibly beyond, but Youtube was unwilling to renew the show for a fourth installment, citing an interest in pivoting towards unscripted content, according to Deadline.

Though it initially landed at YouTube, “Cobra Kai” received offers from everyone from Hulu to AMC when it was first in pre-production, and after a brief search, moved to Netflix for its third season, where it was promptly renewed for a fourth. Though for most audiences, the move just meant clicking on a different website to get your “Cobra Kai” fix, the leap points toward a bright future for the series — Netflix is notoriously willing to drop major cash on bankable properties, and the show’s previous critical and commercial success should earn it a solid run for as long as Heald and Kamen are interested.

So, with a fourth season in the cards, how does season three stack up? I’m happy to report that the change in platforms hasn’t impacted the quality of the show whatsoever — this is still very much the “Cobra Kai” you know and (presumably) love. Season three keeps up with the first two installments, while also leaning much more heavily into characters from the films, giving audiences a look into the psyche and backstory of John Kreese (Martin Krove), the show’s primary antagonist.

Season two ended with a brutal cliffhanger. After an all-out battle royale between the Cobra Kais and the Miyagi-Dos, Johnny Lawrence’s (William Zabka) star student Miguel (Xolo Mariduena) plummets to his possible demise after being kicked off of a balcony by Robby Keene (Tanner Buchanan). When season three picks up, we see the ripples of the school brawl, which last for the entirety of the season. Miguel is comatose and fighting for his life, Robby is in juvie for his nearly fatal role in the fight and Johnny Lawrence has abandoned teaching karate, allowing for Kreese to swoop in and rebuild Cobra Kai in his own brutal image.

One thing “Cobra Kai” does extraordinarily well is juggle all the time spent between its admittedly sizable ensemble cast. Daniel (Ralph Macchio) Johnny, Miguel, Robby, Amanda (Courtney Henggeler), Kreese, Samantha (Mary Mouser), Hawk (Jacob Bertrand), Demetri (Gianni DeCenzo) and Tory (Peyton List) all return as series regulars, yet the show never feels overstuffed — practically a miracle considering the episodes never run longer than 45 minutes. No, at times I almost found myself wishing we had more time with these characters, because while Daniel gets quite a bit to do this season, our protagonist Johnny tends to fall to the wayside a bit.

Season three sees Daniel heading to Japan in an attempt to save his car dealership from financial ruin, and once he gets there, he finds himself reunited with several figures from his past, including Kumiko (Tamlyn Tomita), Chozen Toguchi (Yuji Okumoto) and Yuni (Traci Toguchi).

Although the scenes are touching, and it’s nice to check in with original cast members after all these years, the over-reliance on film characters is “Cobra Kai” season three’s greatest weakness. At times, the storyline with Daniel in Japan feels as if it’s bogging down an otherwise airtight narrative. Daniel’s time in Japan isn’t particularly plot-relevant, nor is it all that interesting — it just feels like fanservice or an excuse to have film characters return.

That’s not to say that characters from the films don’t have a place on “Cobra Kai.” John Kreese makes for a fantastic season three villain and the show smartly delves into Kreese’s history, interspersing flashbacks of his time in Vietnam to further flesh out his character. Yes, he’s still psychotic, and yes, he’s still terrifying, but those flashbacks (combined with some surprisingly moving scenes with List’s Tory) give Kreese the dimension necessary to elevate him past the cartoonishly evil baddie we know from the films.

The late-game reintroduction of Johnny and Daniel’s old flame Ali Mills (Elisabeth Shue) also made for a compelling entry to the back half of the season.Shue matches blows perfectly with Zabka, and if Ali sticks around, there could prove to be an interesting love triangle for Johnny heading into season four.

As for the younger half of the cast, things aren’t always quite as strong. Miguel and Johnny do most of the emotional heavy lifting this season. Mariduena continues to turn in a strong lead performance, and Miguel is as charming as ever, even if he doesn’t have much plot relevance, either comatose or sidelined by physical therapy for most of season three.

In his stead, it’s Hawk who really gets his time to shine;Bertrand is the show’s breakout star without a doubt. Hawk has had a fascinating character arc that showed no signs of slowing down this season, and it was incredibly fulfilling to see him finally make amends with DeCenzo’s Demetri,another cast highlight. Also strong (but underused) was List as Tory, who made the most of her few scenes, but was regrettably only really present when the story needed someone for Sam to fight.

On the subject of Sam, she and Robby made for the least compelling characters of the season. Sam isn’t a particularly interesting character, and she comes off as more privileged and entitled than ever this season,amplified by the fact that pretty much everyone around her is dealing with drastically more difficult problems than she is. Robby, who spends the majority of the season in juvie for his hand in Miguel’s injury, is equally flat. Hisstorylines feel very rinse-and-repeat, and he isn’t likable enough to have us feel any sympathy when he clashes with Johnny and Daniel.