REVIEW: ‘Bridgerton’ commits to a fresh spin on period pieces 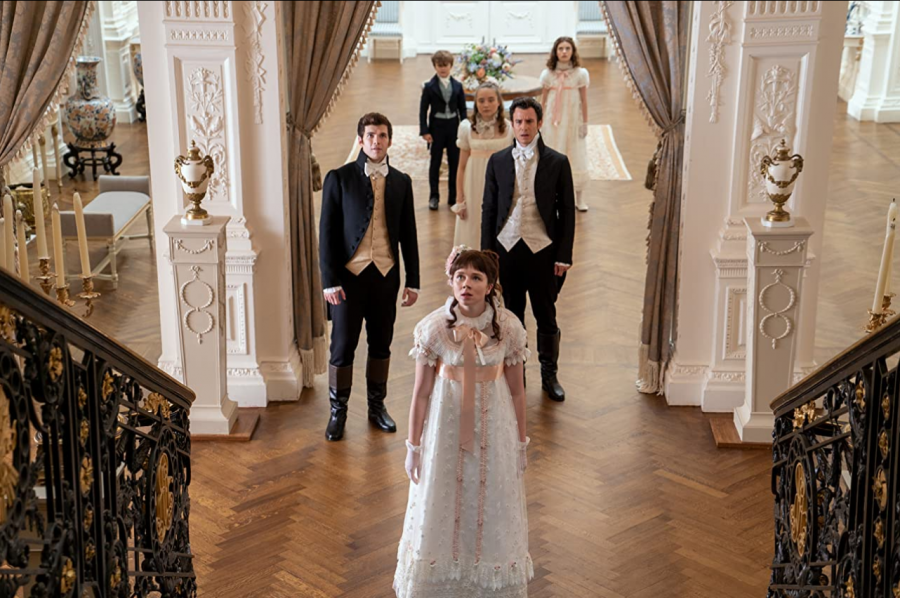 What do you get when you combine Ariana Grande’s “thank u, next,” Dame Julie Andrews, and “Downton Abbey”? If you’re Shonda Rhimes, you get a top five show on Netflix. With a new spin on the traditional period piece, Shondaland’s first Netflix venture, “Bridgerton,” puts women and race at the forefront of the story.

“Bridgerton” premiered with a bang on Christmas Day, garnering 63 million viewers within its first four weeks. The eight-episode season follows the lives of the titular Bridgerton family as they attempt to navigate London high society. The series begins in 1813 at the start of the formal courting season as the eldest Bridgerton daughter, Daphne (Phoebe Dynevor), is being presented to the queen as an eligible young woman. In search of true love, Daphne is eager to throw her hat in the ring.

When a scandal threatens Daphne’s prospects, she enters into an arrangement with the highly sought-after and charming Duke of Hastings (Regé Jean-Page), who is desperate to remain a bachelor. The pair begin a courtship under the guise of true love, while in reality, Daphne is buying herself time to find sincere true love, and the duke is aiming to stay unattached.

Of course, their facade begins to slip as the two find themselves falling for each other, for real. However, this ruse is only one part of this scandalous story. Amidst family drama and judgemental social circles lies a mystery in the form of a gossip columnist who goes by the name of Lady Whistledown. Voiced by the incomparable Julie Andrews, Lady Whistledown narrates the proceedings of the show to both the audience and the characters.

“Bridgerton” begins like any high society period piece, with sparkly gowns, fancy chandeliers, and suitors galore. However, it quickly becomes apparent that this show is not your average period piece. Unlike its sister show “Downton Abbey,” in which the presence of a Black crooner sends the family into a tizzy, “Bridgerton” seamlessly integrates a racially diverse nobility through the marriage of King George III (James Fleet) and Queen Charlotte (Golda Rosheuvel), who is biracial and throughout her reign has appointed new nobility from formerly average Black families.

Producer Rhimes (“Grey’s Anatomy” and “Scandal”) and creator Chris Van Dusen purposely but effortlessly incorporate race into the show in that race is a relevant aspect, but does not serve as the entire point of a character’s arc. However, Simon, the duke, faces constant fear that his position could be compromised if he doesn’t live up to his title as he is from a relatively new nobility.

“Bridgerton” also gives the role of women in the 17th century a 21st-century spin. With a focus on women’s sexuality and agency, the show reimagines what life would be like if women had power over themselves. Historically, women have been kept in the dark about sex and sexuality in order for men to remain in control over them. For Daphne, who begins the show as a naive and star-struck debutante, the discovery of her own sexuality gives her power over herself.

Even with its refreshing appreciation of women and introduction of Black nobles, the show remains loyal to its genre with deeply intertwined (and sometimes drawn-out) twists and turns and little class-consciousness in upstairs-downstairs dynamics.

Most viewers will be able to look past this though, as the characters, stories, and overall newness are delivered in such a neat and modern package. The juxtaposition of Ariana Grande songs performed by an orchestra at a fancy ball paints a crystal clear picture of the show, and if that appeals to you, add “Bridgerton” to your list.