Republicans asked to resign by news organizations across the country 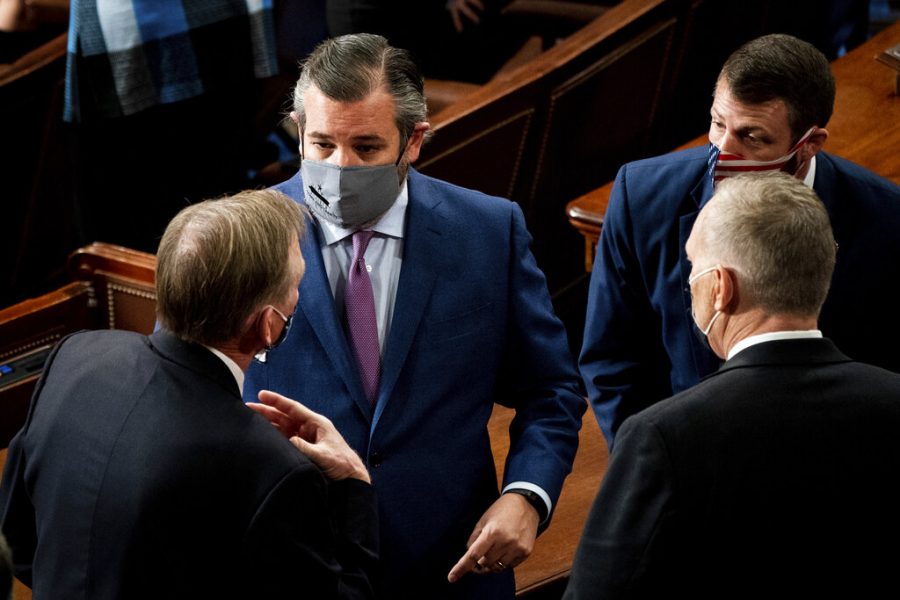 Sen. Ted Cruz, R-Texas, talks with others as a joint session of the House and Senate convenes to confirm the Electoral College votes cast in November's election, at the Capitol in Washington, Wednesday, Jan. 6, 2021. (Erin Schaff/The New York Times via AP, Pool)

After the events that transpired at the nation’s capital on Jan. 6, newspapers around the country like the Milwaukee Journal Sentinel, Houston Chronicle and Kansas City Star called for the resignation of elected officials that sided with President Donald Trump’s baseless claims of election fraud.

On Jan. 6, Congress counted votes to certify the electoral college vote for the 2020 Presidential Election, resulting in a Joe Biden victory. But during the process, there was an insurrection, incited by Trump, outside the United States Capitol building, calling for votes from Arizona and Pennsylvania to be rejected due to Trump’s false claims of election fraud.

These riots grew violent, bringing the proceedings to a halt as crowds stormed the Capitol, marking the first time the Capitol has been breached since 1814.

The Milwaukee Journal Sentinel wrote an editorial calling for the resignation of Senator Ron Johnson, along with Representatives Scott Fitzgerald and Tom Tiffany, for their support of Trump’s efforts to overturn the results of the election.

“All three [Johnson, Tiffany and Fitzgerald] deserve to be expelled when the new Congress is fully seated, just as 10 senators were expelled in 1861 for refusing to accept the will of the voters who elected Abraham Lincoln as our nation’s first Republican president,” the Milwaukee Journal Sentinel editorial board wrote.

Fitzgerald and Tiffany both voted to reject the electoral votes in Arizona and Pennsylvania, even after the deadly riot took place in the U.S. Capitol.

Johnson accepted the Electoral College’s votes representing the two states. In a press release, Johnson said his decision was a last-minute change. Still, Johnson has consistently supported Trump’s claims of a fraudulent election.

“During a hearing before the committee he chairs in the Senate, for example, he invited Trump’s lawyers, who spread debunked conspiracy theories claiming the election was fraudulent,” David Haynes, ideas lab editor for the Milwaukee Journal Sentinel, said in regards to why the editorial continued to call for Sen. Johnson’s resignation despite his change of vote.

Johnson condemned those that rioted at the Capitol, but further into the press release, Johnson called those who believe the false claims of election fraud “patriots who dearly love America.”

“The editorial sought to point out to readers that Senator Johnson and Reps. Fitzgerald and Tiffany were taking extraordinary steps to protest an election that was certified by every state in the union,” Haynes said. “And all the while, they did so offering no credible evidence for claims that there had been election fraud or that the election was anything but fair.”

Johnson, Fitzgerald and Tiffany did not respond to The DePaulia’s request for comment.

The Houston Chronicle published an editorial asking for Sen. Ted Cruz to resign as well.

“[Sen. Ted Cruz] knew exactly what he was doing, what he was risking and who he was inciting as he stood on the Senate floor Wednesday and passionately fed the farce of election fraud even as a seething crowd of believers was being whipped up by President Trump a short distance away,” the Houston Chronicle editorial board wrote.

In defense of his vote, Cruz said he decided it best to investigate claims of fraud to reestablish trust in the electoral system.

In Missouri, the Kansas City Star wrote an editorial calling for Sen. Josh Hawley to resign, in response to his vote to reject Arizona and Pennsylvania election results.

“Having led the parade to the edge of a cliff, Hawley pretends to be astonished by what happened next,” the Kansas City Star editorial board wrote. “And unlike those Republicans who sobered up after seeing the U.S. Capitol trashed, he continues to pretend that the election was stolen from President Donald Trump, who claimed widespread voter fraud even when he really did win, in 2016.”

“I cannot vote to certify the electoral college results on Jan. 6 without raising the fact that some states, particularly Pennsylvania, failed to follow their own state election law,” Hawley said in defense of his vote. “And I cannot vote to certify without pointing out the unprecedented effort of megacorporations, including Facebook and Twitter, to interfere in this election, in support of Joe Biden.”

Hawley said in a press release that Democratic members of Congress have objected during the certification process in the past.

With distrust of the media being a hallmark of the Trump administration, news publications are especially aware of threats to their reputations.

Derek Donovan, community engagement editor for The Kansas City Star, told The DePaulia that the paper is well aware of the strategy that some politicians take to discredit the media and continues to keep an open line to every elected official.

“We are all well aware that this is the strategy,” Donovan said. “We maintain an open line to all our elected officials of any party, and some of the conservatives who criticize us also avail themselves of our letters and guest commentaries.”