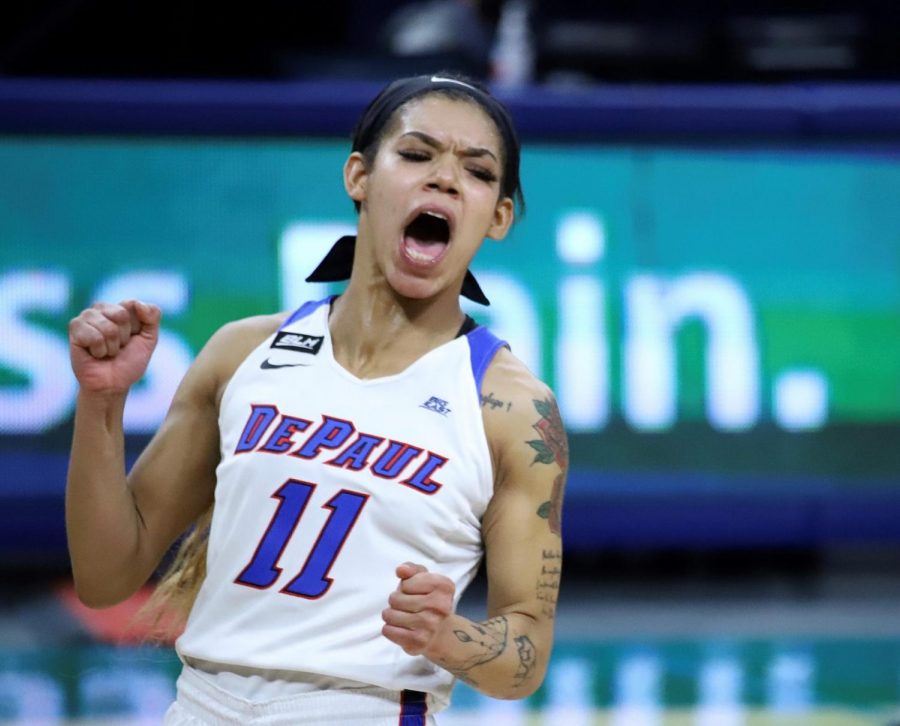 DePaul junior guard Sonya Morris celebrates after a play against Georgetown on Saturday at Wintrust Arena.

After winning at home against St. John’s, DePaul traveled to the nation’s capital to take on the Georgetown Hoyas on Saturday.

Looking for their third straight win, the Blue Demons came out to a strong start as sophomore forward Jorie Allen opened up the score. Despite going down early in the opening minutes, DePaul would quickly take control and never looked back in a 78-54 win.

With 7:37 left to go in the first quarter, junior guard Sonya Morris would put DePaul in front — a lead they did not give back as Morris had a perfect quarter, scoring 12 points including going two-for-two from beyond the arc.

DePaul’s defense forced Georgetown to commit 14 turnovers in the first quarter and limited them to just 10 points. At the end of the first, DePaul led 27-10.

Georgetown tried to battle back in the second. It was a much closer affair as compared to the first. This time, it was the Hoyas who forced DePaul into committing five turnovers and stifled coach Doug Bruno’s team into shooting only 43 percent from the floor.

But the Blue Demons managed to overcome any sort of comeback as they still managed to outscore Georgetown 20-17 in the second for a 47-27 lead heading into halftime.

Junior guard Lexi Held opened the score coming out of the break, sinking a 3-pointer to stretch DePaul’s lead to 23. However, that would be it for a while as the team went on a scoring drought that lasted more than four minutes. Senior Deja Church ended the drought midway through the third quarter and DePaul’s defense held strong with Georgetown mustering only 14 points. It was a low scoring quarter for both sides.

With a 22-point lead heading into the fourth, DePaul simply looked to close out the game. Both teams struggled to convert their shots but the visitors came out on top in the end with a 78-54 win.

The 27-10 run in the first quarter carried DePaul throughout the game. The defense did its part as the Hoyas ended up with 33 turnovers compared to DePaul’s 15.

Morris led the game in scoring with 26 points, going 4-for-5 from the 3-point line. Held came in second with 15 points and five rebounds, and freshman guard Darrione Rogers contributed 10 points with eight rebounds.

DePaul is undefeated this season against Georgetown having won its last game at Wintrust Arena. The win improves DePaul’s overall record to 8-3 and 5-1 in the Big East.

The Blue Demons’ next game is on the road as they are set to face Butler at Hinkle Fieldhouse in search for a fourth straight win.