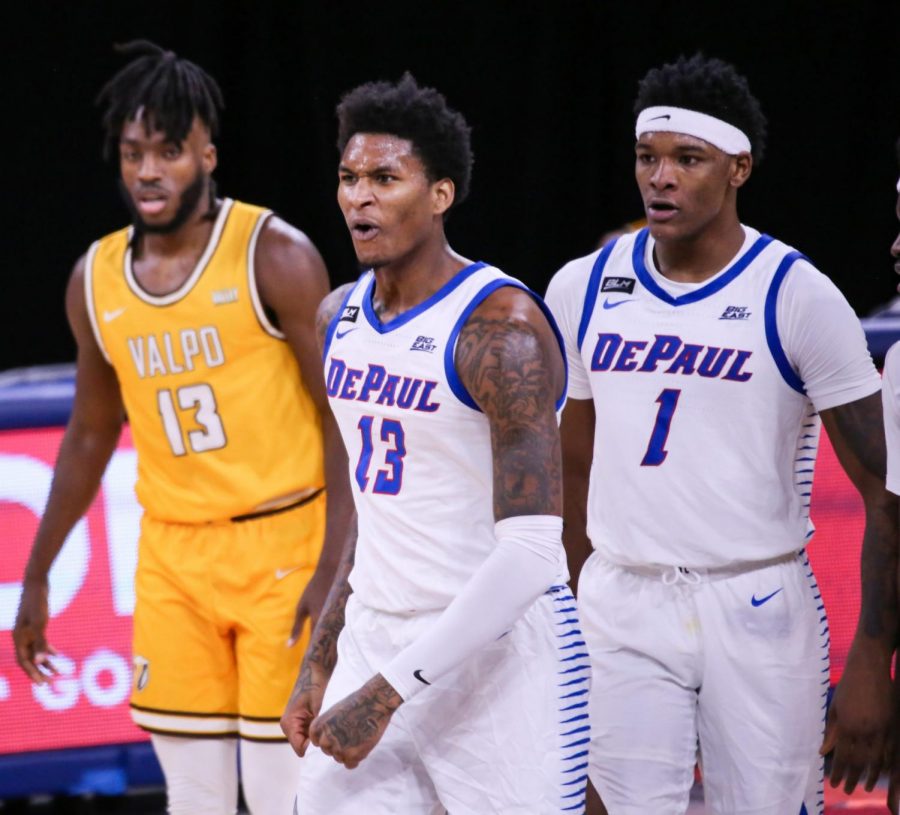 DePaul has come close multiple times this season to picking up its second win, but some poor offensive execution in close games was the difference between a win and a loss.

The Blue Demons, however, found just the right opponent to snap out of their four-game losing streak: the Valparaiso Crusaders. DePaul was in complete control of the entire game and finished with a 77-58 win.

After DePaul had its game postponed against Georgetown on Wednesday and Valparaiso had its weekend series also postponed, both teams quickly came together to schedule a game on Saturday at Wintrust Arena.

“I’m not sure we’ve been through the worst of times compared to everybody else, but from the time we got here in late July until Wednesday, the [players] have been through more than anybody could imagine,” DePaul head coach Dave Leitao said. “So, I give them a ton of credit not just for today, but just the resiliency of staying the course as best they can.”

Valparaiso has only three wins this season and is 0-2 in the Missouri Valley. This was exactly the type of game DePaul needed before resuming Big East play on Tuesday.

The Crusaders struggled to deal with the Blue Demons’ talent, length and athleticism, with DePaul holding the visitors to only 34 percent shooting from the field and only three made shots from behind the arc.

DePaul sophomore forward Romeo Weems also had a productive day, as he started the game making his first six shots and led the team with 20 points. The Blue Demons used a 13-0 run in the middle of the first half to really take control of the game, as they went up 32-9.

“For me personally, I don’t think we were looking bad, we started off a little late,” Weems said. “So, I think tonight we just went out, played hard and had fun.”

Valparaiso, on the other hand, failed to find any rhythm on offense for most of the first half as they went nearly four minutes without scoring. They eventually found some scoring towards the end of the half with an 8-2 run to make it a 15-point deficit, 41-26, going into halftime.

In DePaul’s last game against UConn on Monday, they turned the ball over 24 times — including seven times in the last six minutes, which was a huge factor in the

On Saturday, however, the Blue Demons did a much better job of limiting the turnovers, especially in the first half with only four. They finished the game with 15 turnovers, but some of those came with the game already put away.

“We still got to get better at it, we were 15 assists and 15 turnovers, so I’d like to have that look better,” Leitao said. “But I’m going to be patient because as we continue to do the things that we ask our guys to do on a day-to-day basis, hopefully, one of those things will be a reduction of turnovers on a more consistent basis.”

The Crusaders made a little comeback in the second half as they got within 11, 55-44, but the Blue Demons quickly responded with a 20-1 run to take a 30-point lead.

The visitors closed out the game on a 13-2 run, but DePaul’s win was already sealed for some time. Junior guard Javon Freeman-Liberty spent his first college seasons playing for Valparaiso before transferring to DePaul in May. He finished the game with seven points and three assists.

Senior guard Charlie Moore had an efficient game with 14 points on 5-10 shooting and five assists. The Blue Demons shot 43.5 percent from the field and 40.9 percent from behind the arc.

DePaul improves to 2-4 on the season, with the other win coming against Western Illinois on Dec. 23, but still sits in the bottom of the Big East at 0-4.