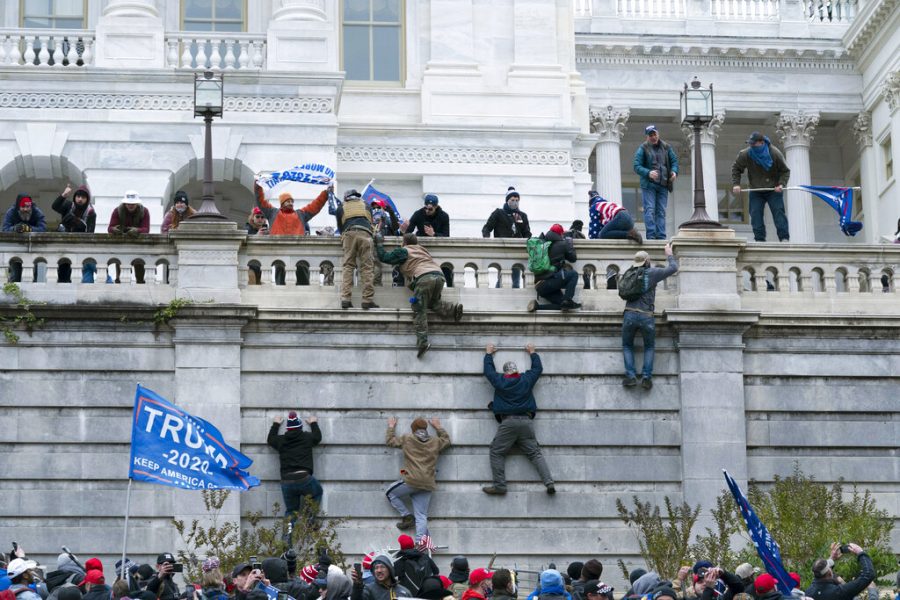 Supporters of President Donald Trump climb the west wall of the the U.S. Capitol on Wednesday, Jan. 6, 2021, in Washington. (AP Photo/Jose Luis Magana)

DePaul’s Black Student Union (BSU) is demanding more accommodations for Black students amid a continual lack of support from the university’s administration.

BSU posted a letter on Jan. 9 to their Instagram after the Capitol Hill raids. The letter critiqued DePaul’s subpar responses to the Capitol and Black Lives Matter protests during summer 2020 and concluded with a list of demands.

In a joint interview with the creators of the letter and demands, BSU Director of PR Vick-Ariel Privert and Treasurer and Membership Coordinator Jaylen Grigsby said that the letter was in response to the University’s lackluster statements.

“The letter was inspired by the quick response from DePaul to the coup attempt in comparison to their slow and lackluster responses to the protests of the summer in 2020,” the statement reads.

BSU demanded that DePaul add more Black therapists and counselors in University Counseling services (UCS ), active points of access to faculty for Black students, diversity training conducted by Black and Brown people, safe spaces for Black students both on and off-campus and respect from the administration.

Grigsby and Privert said in their joint statements the demands derived from the shared experiences of DePaul’s Black students between now and the 2020 summer protests.

“I really appreciate the Black Student Union for taking time out of their day to craft this list of action items and make demands,” Isberto added. “I know it’s also exhausting and taxing to constantly have to ask for demand, so I appreciate that they took the time to do so and worded it very respectfully and also showed that this is something that’s needed.”

SGA released a statement in solidarity with BSU.

“We, as the Student Government Association (SGA) of 2020-2021, are here to stand in solidarity with DePaul University’s Black, Brown, Jewish and Muslim students, faculty and staff to show our support for all marginalized communities affected by the fascist insurrection at the United States Capitol, and the continued acts of white supremacy that have been deeply embedded in our society and upheld by our institutions,” SGA’s official statement said.

SGA also denounced DePaul’s contract with FOP in their statement stating, “DePaul should not be associated with an organization headed by someone who does not respect the law that the police are sworn to uphold. Once again, SGA objects to DePaul’s relationship with the FOP.”

In a statement from May 29, President Esteban misnamed a victim of police brutality as “Eric Ferguson” instead of Eric Garner, a Black man who was killed by police in 2014. The mistake was widely critiqued by the DePaul community.

Grigsby and Privert said in their statement that this mistake is “a great example of the lack of real care for Black students.”

“The statements they released for the [summer 2020 protests] took several days and they were filled with unfulfilled promises, careless typos, and an overall lack of urgency,” they said.

Although DePaul has released statements in solidarity for students of color in the past, Grigsby and Privert said these statements mean nothing without any efforts to change.

“At this point, the DePaul community has no reason to take these statements seriously,” they said. “It is wonderful in theory to have these promises made to you constantly, but without meaningful action, they are nothing but words. Until the promises are kept and Black students’ demands are met, we have no reason to be hopeful for tangible change.”

There has been no attempt from the administration to contact BSU about these demands or after the summer 2020 protests, according to Grigsby and Privert.

This pattern of negligence from the admin is not uncommon, as the DePaul administration did not respond to the letter from Coalition for Racial Justice after a professor was denied tenure and fired on the basis of discrimination.

“We’ve also released other statements directed towards our DePaul administration, primarily the Provost, but did not receive an answer,” Grigsby and Privert said.“When we called on Provost Ghanem to end DePaul’s partnership with the Fraternal Order of Police, their answer was to tokenize a Latinx police officer as a means of showing that their decision was final.”

“The administration is aware of the post and that we are looking to coordinate a meeting with BSU leadership to discuss their concerns further,” said university spokesperson Carol Hughes.

BSU President Keith Norward said that if DePaul were not to comply with these demands it would go against their Vincentian values.

“It is imperative for the DePaul Administration to follow and heed to our demands,” he said. “If these demands are not met, it will simply be another slap in the face. It will directly contradict what the University claims they want to achieve as outlined in their Six Strategic Priorities. As an institution that boasts about being ‘a community gathered together for the sake of our mission,’ we ask that our administration do just that. Follow through on your service to your students.”

Grigsby and Privert said that DePaul contradicts the Vincentian mission by not providing proper accommodations to its Black students.

“If we cannot count on our university to consider our needs, who can we count on in pursuit of a meaningful education?” they said. “The Vincentian mission is not something that can be half done. Its goals must be meant for everyone at DePaul and those outside of the university. There is never enough good to be done, and it feels like DePaul has given up in their pursuit of holistic good.”

“If DePaul administrators wish to have, and more importantly, use Black students for their image and diversity statistics, they need to comply with these demands,” they said. “Having Black students at your institution is the bare minimum, and it should not be the finish of your attempts at diversity and inclusion.”