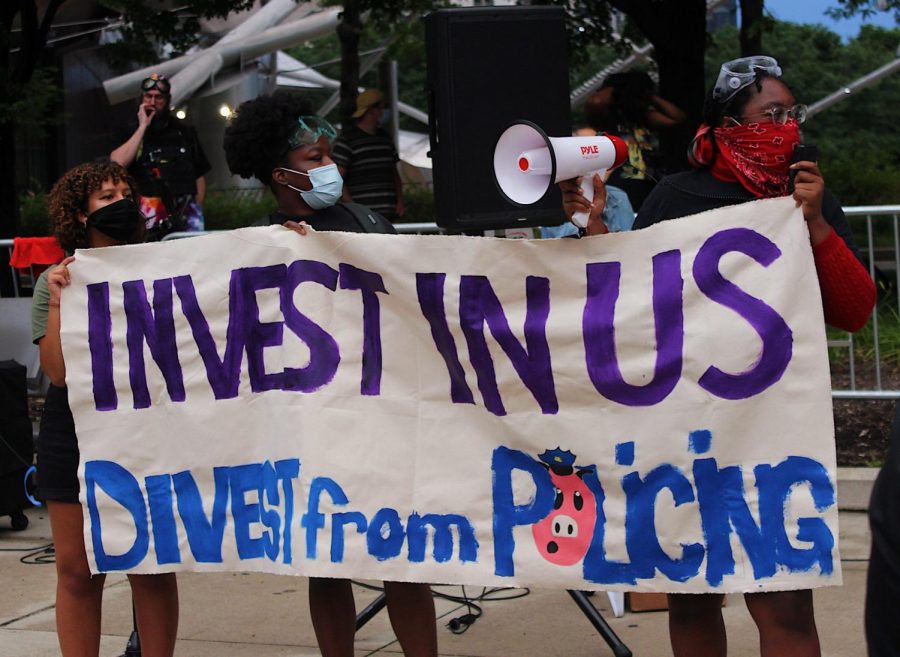 When the president of Chicago’s Fraternal Order of Police defended pro-Trump extremists who sieged the nation’s capital last week, The DePaulia’s staff was shocked. But we weren’t surprised.

This summer, Chicago police punched an incoming DePaul freshman in the face, knocking out her teeth, while she was peacefully protesting. They physically accosted members of DePaul’s student media covering the protests in response to racist police brutality, all while those reporters screamed they were members of the free press. They snubbed Covid-19 safety protocols, both the university’s and their own, for a close-quartered pizza party in our classrooms, while students attended school at home, online.

And through the university’s partnership with the FOP, those same officers can receive a DePaul degree for free.

DePaul and FOP together offer programs that help members of the union to earn their bachelor’s, master’s or doctoral degrees. Participants are offered a 25 percent tuition discount by DePaul, and if the participants receive an “A” as their final grade, the City of Chicago offers a 75 percent tuition reimbursement — amounting to a free degree, according to a description on the website for DePaul’s College of Law.

DePaul claims to uphold the values of St. Vincent DePaul, who spent his life offering service to the needy and suffering. The violent words and actions of Chicago Police this year alone would have St. Vincent rolling in his grave; they’re antithetical to the compassion the university touts to secure tuition dollars.

Months ago, DePaul groups like the Student Government Association, the Black Student Union and Students Against Incarceration criticized the university’s relationship with the FOP, and this week, SGA renewed its calls for the university to cut ties with the police union.

“DePaul expects us to uphold Vincentian values,” SGA wrote in a statement. “We call on the university to have the expectation of those they invite into our community to the same values.”

The DePaulia agrees. It’s time for the university to choose: cut ties with the Fraternal Order of Police, or quit purporting to care about those they harm.

This isn’t the first time we’ve taken issue with DePaul’s relationship with the police.

Just before DePaul students started fall classes this year, Chicago police officers piled into a classroom in the DePaul Center concourse for a surprise party. The officers — uniformed and largely maskless — used DePaul’s facilities to hold a gathering that directly violated university policies designed to mitigate the spread of Covid-19 on campus.

Had The DePaulia not been working in our office, located in the Concourse, it is very possible the event would have gone under the radar of the larger campus community. Given the university’s response — or lack thereof — to this gathering becoming public, it appears that this was their intention.

When previously discussing this event, The DePaulia questioned the priorities of the university: by allowing such a party to occur on campus — one that would knowingly put the DePaul community at risk for contracting a potentially lethal viral illness — who is the university serving?

But the answer now seems clear. By allowing such an event on campus and offering virtually no explanation as to why it was permitted, DePaul let its students, faculty and staff know that their priority is not maintaining the safety of the larger campus community; it’s saving face, even if that means rescinding its own moral code.

This partnership continues after months of protests against police brutality took place across the city, many of which resulted in violence between the police and protesters, some of whom are DePaul students.

As police were arresting protesters during the “Black, Indigenous Solidarity Rally” outside the city’s Christopher Columbus statue in July, video captured a Chicago police officer punching 18-year-old organizer and incoming DePaul freshman Miracle Boyd in the face. Before that incident and in the months since, countless student organizations have called for the severing of the relationship between the university and the police.

Boyd’s case made headlines throughout the city, as she called for the officer who assaulted her to be fired. DePaul said nothing.

By remaining partnered with the police after this brutal attack on one of our own, DePaul turned a blind eye to the real and present danger faced by Black and Brown students when the police are involved.

It appears that’s still the case. The DePaulia recently asked Interim Provost Salma Ghanem whether the FOP president’s comments changed the university’s position on its relationship with the police.

“As news of the unprecedented events in the nation’s Capitol became known, the administration reached out to express dismay and acknowledge the potential need for support and counsel,” Ghanem said. “We certainly disagree with (FOP president) Mr. (John) Cantanzara’s early characterization of the events.”

The influence of St. Vincent DePaul stretches far beyond the boundaries of campus, with Vincentians across the world striving to embody his values.

Fr. Anthony Rosen, a former DePaul student and faculty member, is now a mission officer at the Congregation of the Mission in the Western Province, a faction of Vincentians focused on serving the western United States. When asked about DePaul’s relationship with FOP as it relates to Vincentianism, Rosen called for a nuanced reevaluation of the benefits and costs of this program.

“I believe that DePaul needs to look at who is receiving the benefit and who is causing the problem. Academic Freedom allows for differences of opinion to be aired in a safe place,” Rosen said in an email statement. “The president of the FOP to the best of my knowledge, is currently not a student at DePaul or receiving any benefit. However, it would be an injustice if we would take away funding from deserving students, who are not connected with the FOP president’s words and ideas.”

If these violent actions by the police or the Vincentian way are not enough of a reason for the university to end its relationship with the FOP, then let’s look at it in terms of money – a language with which the university is certainly familiar.

DePaul students are no stranger to a staggering tuition bill as DePaul charges one of the highest tuition rates in the country with a year’s education costing upwards of $40,000. As a result, 88 percent of freshmen receive a scholarship or some other form of financial aid to attend, and many more rely on full and part-time employment to chip away at their tuition.

At the same time, FOP members have access to the same education at a fraction of the price simply because of their affiliation with the union. One begins to wonder: How many of the exorbitant costs at DePaul would go down if all students started paying their fair share?

Ghanem wrote in a statement back in June that the university would continue its relationship with the FOP, arguing that DePaul is “called to provide access to high-quality education to all.”

We agree; everyone deserves an education. But why should DePaul reward police officers who participate in a system of violence and abuse that upholds racism with a free education, while its other students have strived for scholarships, taken out loans and taken on multiple jobs to pay for the same education?

The Vincentian values upon which the university prides itself ring hollow when only some of its students are required to uphold them. The university cannot maintain its relationship with the FOP while also calling on its other students to hold themselves to a higher standard, but with fewer benefits.

You know what must be done.