OPINION: George Orwell did not write ‘1984’ so it can be used to fit a ‘Trump’ narrative 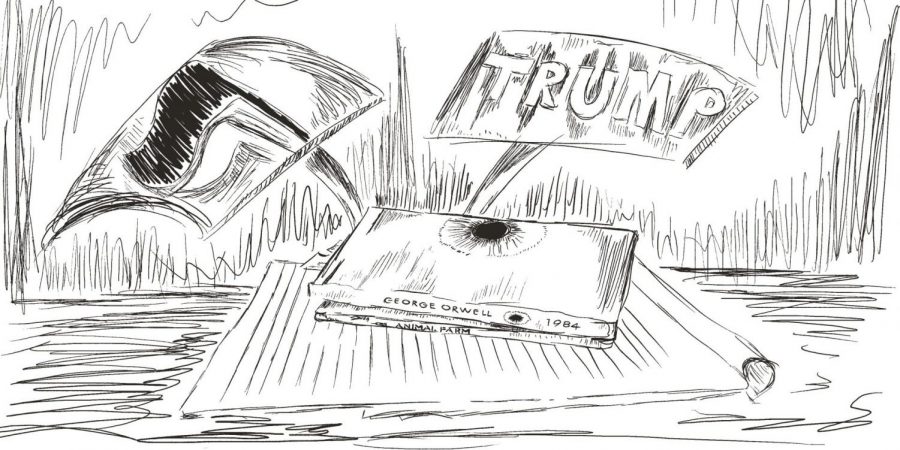 Thumbs up to President Trump for giving me and thousands of other Americans a reason to revisit George Orwell’s novel, “1984.” And for that, Orwell is probably rolling in his grave with all of the misuse.

Inspired by the attack from Jan. 6 and Trump’s social media blackout, many Twitter users and political figures such as Donald Trump Jr. and Missouri Sen. Josh Hawley are describing these latest events as “Orwellian” and pulling references from “1984” to fit their right-wing narratives.

“We are living Orwell’s 1984,” Trump Jr. tweeted. “Free speech no longer exists in America. It died with big tech and what’s left is only there for a chosen few.”

We are living Orwell’s 1984. Free-speech no longer exists in America. It died with big tech and what’s left is only there for a chosen few.

This is absolute insanity! https://t.co/s2z8ymFsLX

— Donald Trump Jr. (@DonaldJTrumpJr) January 9, 2021
After Simon & Schuster backed out of the book deal with the Republican senator, Hawley tweeted a statement, “This could not be more Orwellian,” and said that these actions are a direct assault on the First Amendment.

But these actions are more “Counter-Orwellian” than “Orwellian.”

Twitter’s move to suspend President Trump and Simon & Schuster’s decision to revoke Hawley’s book deal are decisions made to prevent the spread of misinformation, fake news and incitements of violence. If there’s any Orwellian reference here, it’s valid to claim these actions are “Counter-Orwellian” as people are now rising against misinformation and election propaganda perpetuated by Trump and his loyalists.

“The book is a warning against the power of propaganda and authoritarianism, and the thought that people tend to believe anything fed to them from people in power,” Chris Arcouette, a junior at DePaul said.

Twitter and other forms of social media are private companies. Their latest moves against Trump, his followers and loyalists are not Orwellian but justified practice of said companies protected under Section 230 of the 1996 Communications Decency Act. Trump and other Republican lawmakers have been open critics to Section 230 for they feel that tech companies have too much power over censorship and editing over what content is published on sites.

“Twitter is a private company, and if they or any other social network deems him as a concern and bans him, maybe his followers should look into why,” Aleksandra Burgiel, a junior at DePaul said.

Twitter didn’t ban Trump because it didn’t agree with his politics, they banned him after the entire country witnessed our Capitol being violently attacked — a direct result of years of violent rhetoric from the White House.

“Trump was blocked because of his perpetual spewing of fake news and the fact that his latest statements resulted in an insurrection at our capital, as Twitter stated, they suspended Trump to prevent anyone else from interpreting his tweets as calls to incite violence, they very specifically laid out all the reasons for the suspension,” Arcouette said.

I can see why this is troubling to a president and his followers who have constantly been flagged and censored for spewing election conspiracies, false claims and incitements of violence. But it is not valid to claim it as “Orwellian.”

“Orwellian has become almost meaningless. The comparison is weak,” Dr. Jacob Stump, an International Studies professor at DePaul University said. “The book was about a powerful government that dominated its citizens through violence, surveillance and mental bondage. The irony is that the penalties Trump enjoys today have almost all been made by multinational corporations who operate on the so-called free market.”

Many of those who are on social media touting Orwellian claims fail to acknowledge that Orwell was a devoted anti-fascist.

“Considering Orwell was an outspoken Democratic-Socialist and anti-facist militia member [the Workers Party of Marxist Unification], I don’t think he would support his work being used how it has been,” Arcouette said. “The platform it’s being used on goes against everything he stood for.”

In his autobiography, “Homage to Catalonia” Orwell in fact wrote, “When I joined the militia I had promised myself to kill one Fascist — after all, if each of us killed one they would soon be extinct.”

But for fun’s sake, if Orwellian claims are going to be thrown around, it’s only necessary to refer back to Orwell’s novel and analyze the parallels.

Anyone who has read and studied Orwell’s works and agreed with his ideologies would know that the totalitarian Big Brother would be Trump, and the “party” would be his loyalists, attempting a fascist takeover and a dictatorship rule. But luckily, in real life this “party” was unsuccessful and perhaps could work as a prelude to “1984” if Trump was successful at all in the first place.

Fox News, One America News Network, Newsmax and the typical blocked Facebook uncle are the workers in the Ministry of Truth, working strategically to destroy the facts and alter the headlines and spread misinformation. In this case, rewrite the election results and spread lies and conspiracies of voter fraud.

“There have been some Orwellian turns of speech that Republicans and Trump have used, like repeating the claim that the election was stolen even when there is near zero court-admissible evidence to support the claim,” Dr. Stump said. “What makes it Orwellian is the repeated claims of a stolen election have become ‘truth’ for so many of his supporters –– similar to ‘2 + 2 = 5.’”

The real-life [not caught] Winstons, in this scenario are the 81 million Americans who had the chance to democratically vote for Joe Biden to remove President Trump from a dictatorship track. The “left” would be considered the “Brotherhood” working to dismantle the Party that is Trump.

The “Two Minutes Hate” could describe the events following a Trump tweet where hundreds of his followers comment on their disgust and hatred for Joe Biden and members of the left. Or perhaps a Trump rally.

The Ministry of Love in today’s scenario would be the various elected leaders, lawyers and Trump administrators who have worked to undermine the election, refuse the results and bring war to the Capitol of the United States.

Senators Hawley, Ted Cruz and Rep. Marjorie Taylor Greene would be the officials who worked in the Ministry of Love, enforcing their loyalty to Big Brother [Trump] through techniques of emboldened lies and brainwashing.

If Trump and his loyalists want to make bold claims of “Orwellian times” and use “1984” to fit their narratives, they should either read or revisit the book, or maybe learn a thing or two about who Orwell was.

The actions taken by Twitter and other social media platforms are not Orwellian, they are in the right of the law granted by Section 230 and tech companies.

Politicians are not being “censored” when they still have the capability to hold White House briefings and give speeches in the House of Representatives.

Q-anon posts are not “thought-crimes,” they are conspiracies.

Twitter is not the “thought-police” –– it is a private company attempting to limit the spread of misinformation, calls to violence and conspiracies.