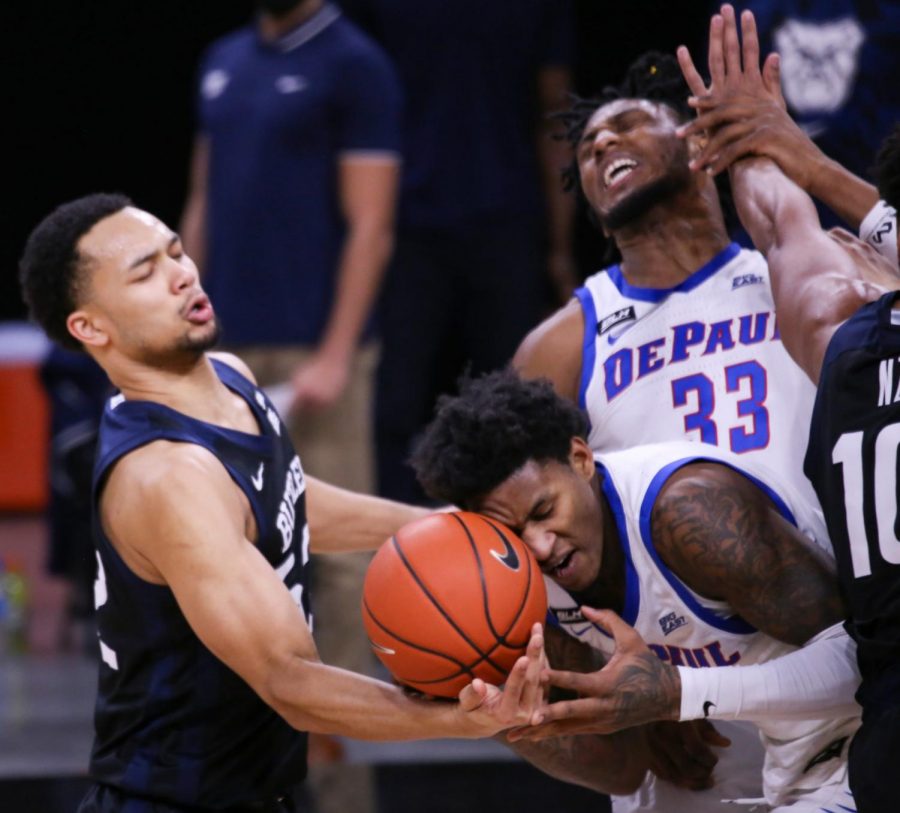 DePaul was seeking to start its first winning streak of the season on Tuesday when Butler visited Wintrust Arena.

Instead, the Blue Demons’ offense came out cold in the first half by only scoring 17 points and the team was never able to make up an 18-point halftime deficit, losing 67-53.

“I think the part of being mature about taking care of your business is not being dependent upon seeing a ball go in a basket all the time,” DePaul head coach Dave Leitao said. “That has happened to us [during] different stretches during the season. We have had lulls and our offense hasn’t clicked because we don’t see the ball going in the basket enough.”

The Blue Demons were coming off a 77-58 win over Valparaiso on Saturday, a win that was only DePaul’s second of the year. The team finally found some offensive rhythm and execution against a struggling Valparaiso team.

Well, DePaul was looking to carry over some of that momentum to Tuesday night’s game and pick up its first Big East win of the season. But it was Butler, who beat No. 8 Creighton on Saturday, that played like a team with purpose and drive, especially in the first half.

Both teams came out struggling to shoot the ball, with Butler holding a slim 10-5 lead at the first media timeout. After that, however, the Bulldogs and Blue Demons went in separate directions.

DePaul’s offense completely disappeared as they couldn’t buy a bucket for most of the first half. The Blue Demons only knocked down three shots in the first 10 minutes before going on a six-minute scoring drought.

“I’ve said it in the first two or three timeouts to just stay the course, stay the course and eventually those shots would go in,” Leitao said. “But you have to have a foundation that you lean on when things that you expect to go well, don’t go well. I think young people, especially, judge success sometimes on two very specific things: how much they play and how much they score. I’m not saying that was a specific reason, but the shoulders drop all of sudden and all of sudden everything that you are trying to do that has a lot to do with success, all of those details go astray.”

Butler eventually extended its lead to 23, 35-12, before DePaul finished out the first half scoring five straight points. But the shooting numbers were not pretty for the home side, as they went 7-of-28 from the field and 2-10 from the 3-point line.

The Bulldogs’ domination continued early in the second half when they got their lead all the way to 25, 52-27, with just over 12 minutes to play in the game. But DePaul started to show more fight and determination following the under-12 media timeout, especially with freshman guard Kobe Elvis leading the charge.

Elvis scored eight points in the second half and finished the game with a team best 12 points.

“It’s preparation,” Evis said of DePaul’s performance. “I think guys coming in being ready to go obviously is something that we need to really key in on and get done, so I’ll just say that. Coming ready to play.”

With Elvis’ spark off the bench and DePaul’s defense doing a better job in the middle of the second half, the Blue Demons started to cut into Butler’s lead. DePaul held the visitors to only three points over six minutes, while the offense was able to get out in transition and get easy baskets.

DePaul would finish the game not making a shot in the final five minutes, which is a problem the team has had in past Big East games this season when the offense goes cold down the stretch.

Senior guard Charlie Moore was the only other DePaul player who finished in double figures with 11 points. The Blue Demons drop to 2-5 overall this season and 0-5 in the Big East, the second time the program has lost its first five conference games in Leitao’s last seasons.

DePaul will be back in action on Saturday when they travel to face Marquette.