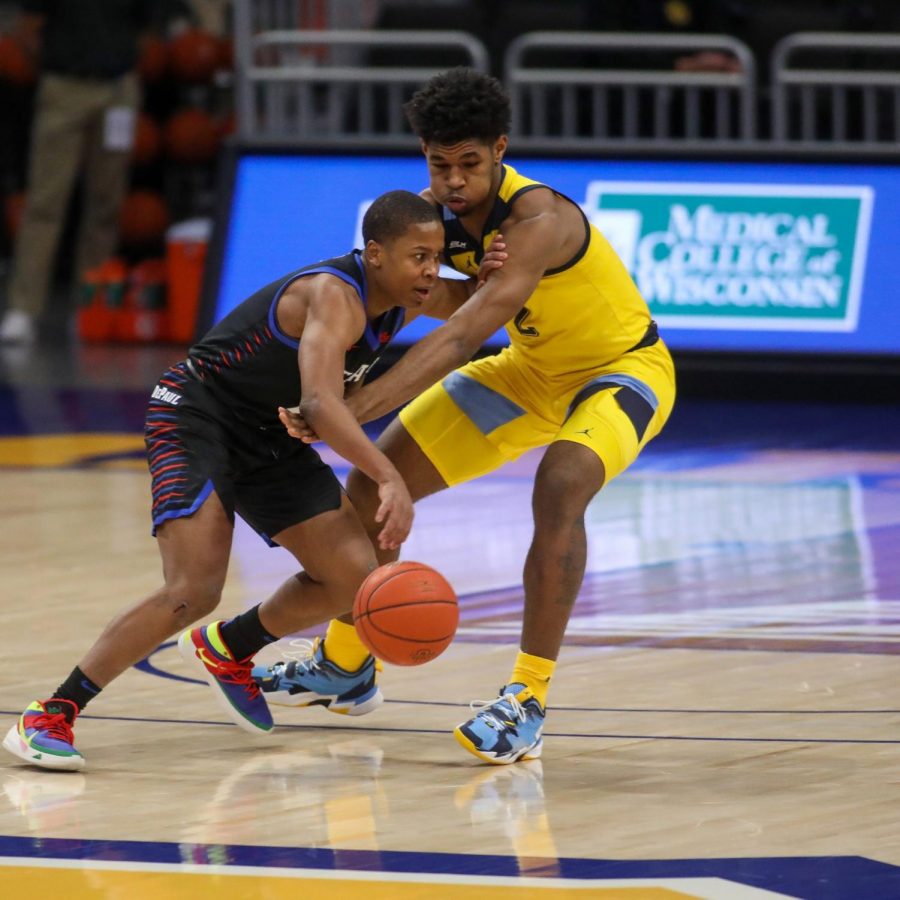 A familiar story was seemingly about to play out in the final five minutes in DePaul’s game against Marquette on Saturday: a late game collapse.

The Blue Demons controlled most of the game on both ends of the floor, but the Golden Eagles were starting to make a run with about 10 minutes to play in the game — a story too similar to how DePaul has lost multiple Big East games this season.

But DePaul did not let the final result end up in a loss on Saturday, as the Blue Demons finished the game on a 14-5 run to win 68-61 at Fiserv Forum.

“Winning is a euphoric feeling and not having the opportunity in this league thus far to do that has been hard on all of us,” DePaul men’s basketball coach Dave Leitao said. “So to be able to win, particularly on the road against a really good team, I give a lot of credit to the stick-to-itiveness of the guys and keeping a positive mindset on what we are trying to do.”

The game was looking like it was slipping away from the Blue Demons late in the second half after Marquette rallied to take a 56-54 lead with 3:48 to play in the game. Following a pair of missed free throws from DJ Carton, DePaul was able to make the key plays down the stretch to ensure its first conference win of the season.

The Blue Demons’ two leading scorers this season, Charlie Moore and Javon Freeman-Liberty, scored the team’s final 14 points, including Moore going 8-for-8 from the free-throw line to ice the game. Moore led the team with 21 points, while Freeman-Liberty finished with 19.

Marquette, however, failed to make shots after they went up two and had to settle for taking long 3-pointers. Carton did knock down a shot from behind the arc to make it a three-point game, 64-61, with 26 seconds to play, but Moore camly secured the win by hitting a couple of free throws.

DePaul had increased its lead all the way up to 13, 45-32, early in the second half after the team went on a 5-0 run. The Golden Eagles came into the game averaging nearly 80 points per game, but were struggling to deal with the Blue Demons’ energy and intensity on defense.

In the first half, Nick Ongenda did a spectacular job of protecting the paint as he blocked four shots and made it hard on Marquette to score inside.

“Nick just being long and big and blocking shots, altering shots, five block shots especially on the ball with Theo John, who has a distinct physicality advantage,” Leitao said. “But hold your ground and then go up and block or alter the shot.”

Freshman guard Kobe Elvis also came off the bench to provide a spark in the first half, with Moore and sophomore forward Romeo Weems not finding their scoring groove early on. Elvis finished the game with seven points and three assists.

“Kobe, he’s got a level of understanding and an ultimate level of maturity that’s beyond his age,” Leitao said. “He’s got a lot of growing yet to do quite obviously, but he’s got much, much more potential because I think he approaches both coaching and understanding the game the right way.”

Marquette started the game by scoring its first 12 points via the 3-point shot, but they would not be able to sustain their hot shooting from deep. They finished the first half only making one more 3-pointer and finished with more turnovers (10) than field goals (8).

Both teams would trade leads throughout the first half, but DePaul closed out the half with an 8-0 run to take a 30-24 lead into the break. Alongside with Elvis and Ongenda, junior forward Darious Hall was another player who had a productive first 20 minutes — as he had five points, four rebounds and three steals at halftime.

The Blue Demons didn’t allow Marquette to get off to a fast start in the second half, as the visitors built their lead to eight, 34-26, early on in the half. Marquette eventually was able to get back into the game by forcing turnovers and knocking 3-pointers.

DePaul closed out the victory with clutch free throw shooting and securing its first road win at Marquette since 2016. Leitao’s team improves to 3-5 overall and 1-5 in the Big East this season.

DePaul returns to Chicago to start a three-game homestand on Wednesday against St. John’s.