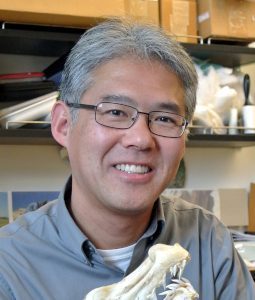 Shimada and his team — consisting of Dr. Matthew Bonnan of Stockton University, Dr. Martin Beck, Michael Giffiths from William Paterson University and undergraduate research assistants — found that some of the sharks would hatch earlier than others while inside the mother.

“[Megalon] sharks don’t lay their eggs outside the body, but instead eggs hatch inside the mother that eventually gives live birth to young pups,” Shimada said.

Shimada and his team found that newborn sharks that hatched prematurely would eat the eggs that had not yet hatched. This would give the hatched siblings more nourishment, resulting in a larger size at birth.

“Although energetically costly for the mother to raise such large embryos, newborns have an advantage as ‘already-large’ predators with reduced chances of getting eaten by other predators,” Shimada said.

The study continued to reveal that the life expectancy of the shark would be at least 88 to 100 years old, according to Shimada. The growth during their lifetime was rather steady and slow.

Shimada was intrigued to study the reproduction and growth pattern of the Megalodon as previous studies were “largely in the realm of speculation.”

The idea to pursue a more precise, scientific study on Megalodon growth patterns came to Shimada in October 2019. Hesoon communicated with the Royal Belgian Institute of Natural Sciences in Brussels, Belgium about getting the megalodon vertebral specimen housed there.

Shortly after he spoke with the museum, Covid-19 took over the world and resulted in delays to June 2020. After the images and radiographic data was received by Shimada and his team, it took about a month to conduct the analysis and write up their research paper.

“It was a rather remarkably simple study compared to many of my other projects, but the implications of the data obtained in this particular study were really profound,” Shimada said. “I do believe the new study has made a significant progress in deciphering the biology of [the] Megalodon.”

The research was funded by the National Science Foundation, an independent federal agency founded in 1950 by Congress to “promote the progress of science and grow health, welfare and national defense initiatives.” The organization was inclined to fund the Megalodon research for a variety of reasons.

“This research will not only help us to understand ancient sharks, but will help us to learn more about extinction risk in modern sharks as well,” said Dr. Dena M. Smith-Nufio, the program director of sedimentary geology and paleobiology at the National Science Foundation. “[In addition], the research team has incorporated opportunities for undergraduate students from minoritized groups to gain hands-on experience in research and in developing and delivering community-building activities.”

According to a National Science Foundation spokesperson, the process for funding is very competitive. Each year, the organization receives around 40,000 proposals and only 11,000 get awards.

“Understanding the biology of Megalodon is important because it is reasonable to assert that, as a major carnivore that lived in the past, it must have played an important role in shaping the marine ecosystems we know today,” Shimada said.