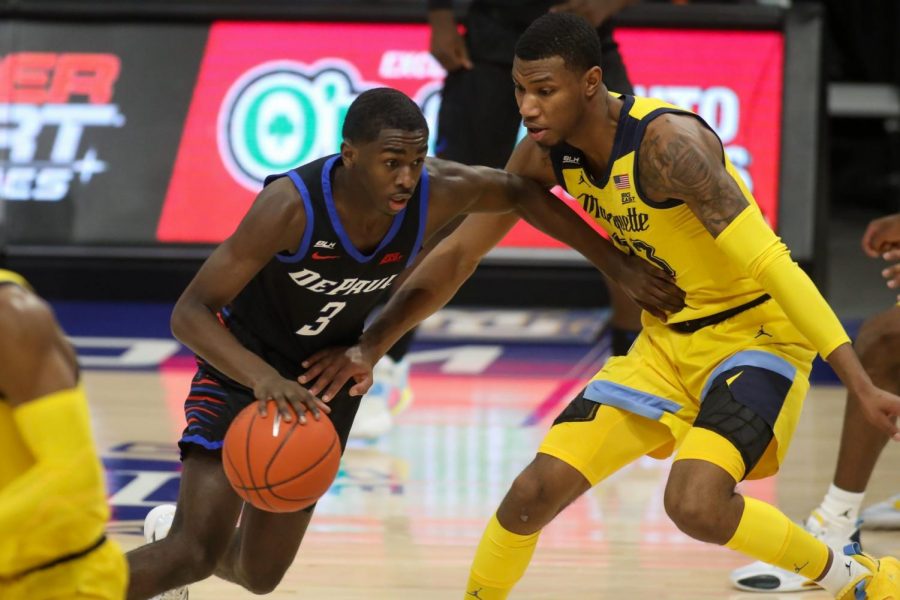 Saturday’s game between DePaul and Marquette had the makings of another heartbreaking loss for the Blue Demons. The Golden Eagles took a two-point lead with just under four minutes left, and DePaul again made similar mistakes to previous losses.

The Blue Demons missed a free throw, had five turnovers in five minutes and the defense was starting to show cracks as Marquette was making its run.

DePaul had seen its early 13-point lead, 45-32, evaporate because of those mistakes and when Marquette grabbed its first lead since late in the first half, there was a sense that the Blue Demons were going to let another close game slip away from them.

“Winning is a euphoric feeling and not having the opportunity in this league thus far to do that has been hard on all of us,” DePaul men’s basketball coach Dave Leitao said. “So to be able to win, particularly on the road against a really good team, I give a lot of credit to the stick-to-itiveness of the guys and keeping a positive mindset on what we are trying to do.”

Perhaps Marquette would have gone on to win this game after taking a 56-54 lead with 3:48 to play in the game if Fiserv Forum was packed with Golden Eagle fans. But DePaul still had to exercise its past demons on the road at Marquette, a place DePaul hadn’t won at since 2016, and get past those previous late-game collapses.

When it was time to step up down the stretch, it was the play of guards Charlie Moore and Javon Freeman-Liberty that carried the team. Both combined to score the team’s final 14 points, and Moore hit eight clutch free throws to seal the win.

And following a missed 3-point attempt by the Golden Eagles with 11 seconds left, it was Moore — the shortest player on the court — who rose above multiple players to grab the rebound and got fouled. He then walked down 94 feet to score the game’s final two points.

When Marquette was making its run late in the second half, DePaul had to make an adjustment in its post defense in order to do a better job of contesting shots. The Golden Eagles made an adjustment, according to Leitao, where they put four players on one side while DePaul was standing around watching the post player create offense for others.

But the Blue Demons were able to quickly adjust to that and only allowed one made shot in the final three minutes.

“So, we had to get maybe a step closer or one more step away from the ball, but then we just had to be a little bit more alert in our transition to get to the ball, and I thought that we did after we gave up the lead,” Leitao said. “That was just a minor adjustment, but I thought we defended more shots as a result, made them miss and we got the rebound.”

It wasn’t just the play of Moore and Freeman-Liberty that handed the Blue Demons their first Big East win of the season, it was also the energy and spark that Kobe Elvis and Nick Ongenda provided off the bench in the first half.

In the case of Elvis, he did a solid job of leading the offense in the first 20 minutes when Moore and Romeo Weems were struggling on offense. He scored five points and dished out a couple of assists, but it was also the calmness that he brought to the offense that was impressive for a freshman. Going up against a stingy Marquette defense, Elvis always found a way to create space and shots for himself and others.

Following the Blue Demons’ 67-53 loss to Butler on Tuesday, it was Elvis who said the team needs to do a better job preparing for games.

“It’s preparation,” Evis said. “I think guys coming in being ready to go obviously is something that we need to really key in on and get done, so I’ll just say that. Coming ready to play.”

In the case of Ongenda, he did it on the defensive end in the first half, blocking four shots and altering plenty of other attempts. He played a huge part in the Golden Eagles only shooting 27.6 percent in the first half and committing more turnovers (10) than field goals made (8).

“Nick just being long and big and blocking shots, altering shots, five block shots, especially on the ball with Theo John, who has a distinct physicality advantage,” Leitao said. “But hold your ground and then go up and block or alter the shot.”

Now, the Blue Demons need to build off a win like this where they showed they can win a close game, but it’s about doing it on a consistent basis rather than a rare occurrence.

For the time being, however, DePaul can take positives out of this game and start getting ready for a home game against St. John’s on Wednesday, a team that has already won three Big East games this season.