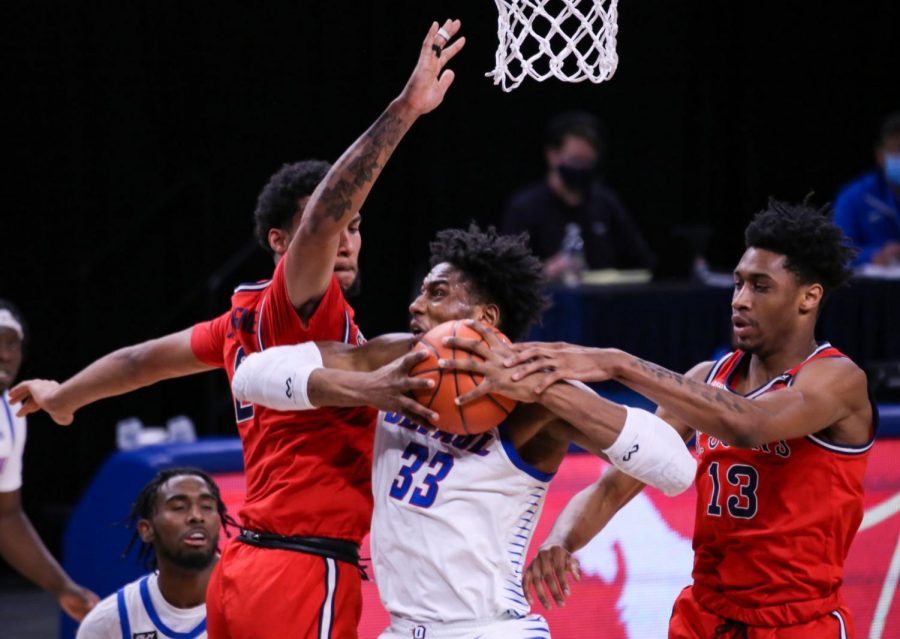 DePaul finally proved in its last game against Marquette on Saturday that they have the ability to win close games, securing a 68-61 victory over the Golden Eagles on the road.

On Wednesday, DePaul was trying to prove that they can put together consistent games in the Big East for the first time this season.

Well, DePaul failed that test. In a home against St. John’s, DePaul had trouble stopping the Red Storm and couldn’t find any offensive rhythm, losing 81-68 at Wintrust Arena.

DePaul picked up its first Big East win of the season when they defeated Marquette on Saturday, with the defense playing a huge role in the victory. They only limited the Golden Eagles to 61 points and made key stops late in the second half.

“I thought post Saturday’s game that we could build off of some of that momentum in key areas,” DePaul head coach Dave Leitao said. “As I’ve said before, we’ve got to be able to hang our hat on defending and rebounding and playing as hard as we can.”

The Blue Demons were not able to carry over that same defensive intensity on Wednesday, as St. John’s scored 49 points in the first half. The Red Storm made four of their first eight 3-point shots.

Both teams traded leads in the early parts of the first half, with Pauly Paulicap dominating the glass for DePaul. He scored seven of the team’s first 13 points and finished the half with a double-double, 13 points and 13 rebounds.

“I came into this game with the intention of wanting to win, trying to win,” Paulicap said. “I put my best foot forward and I tried to do as best as I can. Whatever I can do as far as like rebounding, if it’s scoring, that’s a plus. But the opportunity was there so I took it.”

But even with Paulicap’s energy and effort in the first half, it was still St. John’s that pulled away for a 15-point halftime lead. Besides Paulicap, only three other DePaul players scored in the first 20 minutes: Charlie Moore, Javon Freeman-Liberty and Darious Hall.

The Blue Demon only made one 3-pointer in the first half and shot 35.9 percent from the field. St. John’s, on the other hand, got contributions from six players in the opening 20 minutes, and were led by Posh Alexander and Vince Cole combining for 24 points.

The scoring slowed down in the second half for St. John’s, while the turnovers started to increase for the visitors. After only having four in the first half, they doubled that in the final 20 minutes.

DePaul had moments in the second half where they looked like they were going to go on a run, but turnovers killed any chance they had to make this a close game in the final few minutes. The Blue Demons finished the game with 18 turnovers, which led to 30 St. John’s points.

While seven players scored in the second half for the Blue Demons, Moore was the only one in double figures with 14 points. Sophomore forward Romeo Weems finished the game with only one point and missed all five of his shot attempts.

The Blue Demons made it a 66-59 game with 6:40 to play in the game, but they then went on a three-minute scoring drought, while the Red Storm pushed their lead back to 15.

This seemed like a good chance for DePaul to not only continue to build its momentum following the win over Marquette, but get within one win of St. John’s. Instead, the Red Storm are now three wins ahead of the Blue Demons.

DePaul will continue its three-game homestand on Saturday when No. 17 Creighton visits Wintrust Arena. The Bluejays improved to 8-3 in the Big East this season following their 85-81 win over Seton Hall on Wednesday.