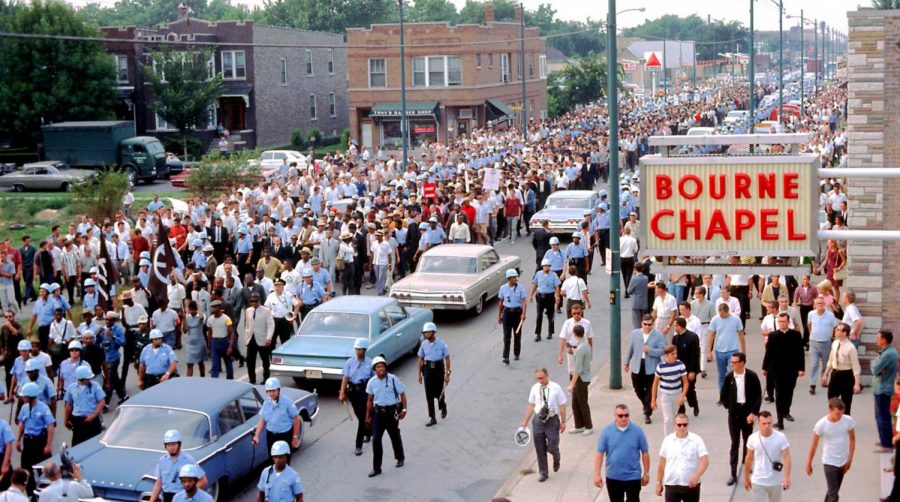 A civil rights demonstration in Chicago in support of fair housing.

The Black Lives Matter Movement has sparked debate about race and racism in the U.S., and social media has been instrumental in driving those conversations.

One popular claim circulating the internet is that photographers of the civil rights movement originally took their photos in color, but they were switched to black and white to make them appear older when appearing in popular media and history books.

i was today years old when i found out that pictures from the Civil Rights Movement were originally taken in color and purposefully shown to us in black and white to make us think it was a long time ago pic.twitter.com/v1JhI9YZb4

The post has almost 60,000 retweets and 140,000 likes on Twitter, and it shows color photographs of the 1963 March on Washington, the 1965 Selma March and a demonstration in 1968 after the death of Martin Luther King Jr.

There’s just one problem with this post — it isn’t true.

“Color was just not as prevalent as a medium at that time,” said Steve Harp, associate professor and former co-area head of photography and media art of The Art School at DePaul University. “It’s not that it was inaccessible — it just wasn’t used as much.”

Photography during the civil rights movement was vastly different from how photo sharing works now; back then, photographers relied on wet film and the news judgment of a few editors.

During the civil rights movement, cameras were bulky and expensive, and most photographers worked from newspapers and magazines. Black-and-white photography was the standard — it was faster, easier and cheaper for both publications and photojournalists eager to get their work out. If photographers wanted their photos to be published or seen by the public, they had to shoot in black and white.

Black and white photography was also seen as a “truer” form of documentation.

“Black-and-white photographs tend to be this kind of signifier of a certain kind of documentary photography… black and white seems to suggest being kind of more truthful,” Harp said.

Many renowned photographers would go so far as to say color photography was vulgar or of less artistic value than black and white.

All this to say, color images of the civil rights movement are rare. According to The New York Times, in 1979, only 12 percent of newspapers printed some of their news pages in color.

What color photography of the movement does exist?

Photographers like Gordon Parks and Bernard Kleina, who both often shot in color, are exceptions to this.

Parks was a groundbreaking Black American photojournalist, known for showing issues of civil rights, poverty and race in the 20th century in his work. He worked for Life Magazine, a publication known for its color images. Gordon worked to shoot his Black subjects in color. This was a huge challenge — color-film technology at the time was made sensitive to white skin without regard to darker skin tones. Parks used his art photography background to figure out how to do it well, according to Marcy Dinius, an English professor at DePaul.

Bernard Kleina, in contrast to Parks, was an amateur photographer who began shooting in color almost by accident. The Chicago native and Roman Catholic priest at the time rushed to Selma to document the 1965 protests, producing his first-ever “serious photos,” he said. It didn’t even occur to him to photograph in black and white.

When King moved to Chicago, Kleina was there and ready to document the Chicago Freedom Movement. Kleina said widespread blame for unrest and criticism of King motivated him to photograph events.

“I took not only photos of Dr. King, but also of those who were trying to block the march, those were throwing bottles and other things,” he said.

Kleina’s photographs have earned recognition as some of the only existing color photos of Martin Luther King Jr. and have been displayed in many museums, including the Smithsonian.

“For many people who have seen [my photos], it’s the first time that they see Dr. King in color,” he said.

How do we view these photos now?

Photography has never been more accessible; almost everyone walks around with a high-quality camera in their pocket and can take and distribute photos in just seconds. In contrast to the ordeal that was developing a color photograph back in during the civil rights movement, activists and protesters during the nationwide Black Lives Matter protests and other movements for social justice this past year were able to share color photo and video content in real time.

Color photographs of the civil rights movement may help viewers today draw connections between the struggles for racial justice in the 1960s and now. However, some may want to stay in the past. Kleina explained that despite his groundbreaking work with color photography, many people still prefer black-and-white images, perhaps because there’s more of a “historical feel to them.” He sees some resistance to his images and even has trouble selling images to suppliers.

Seeing the civil rights movement both literally and figuratively in black and white may bring about too much of a binary understanding of the movement, ignoring the many shades of grey (or steps in progress) in between, according to Dinius.

“Color gives us a fuller spectrum and a more complex way of seeing things,” she said. “It adds another dimension.”

Correction (1/30/2021): A previous version of this story referred to Steve Harp as the co-area head of photography and media art of The Art School at DePaul University. Harp formerly held this role and is no longer in this position. The story has been updated to reflect the correct information.