DePaul fails to close against Creighton, losing 69-62 at Wintrust Arena 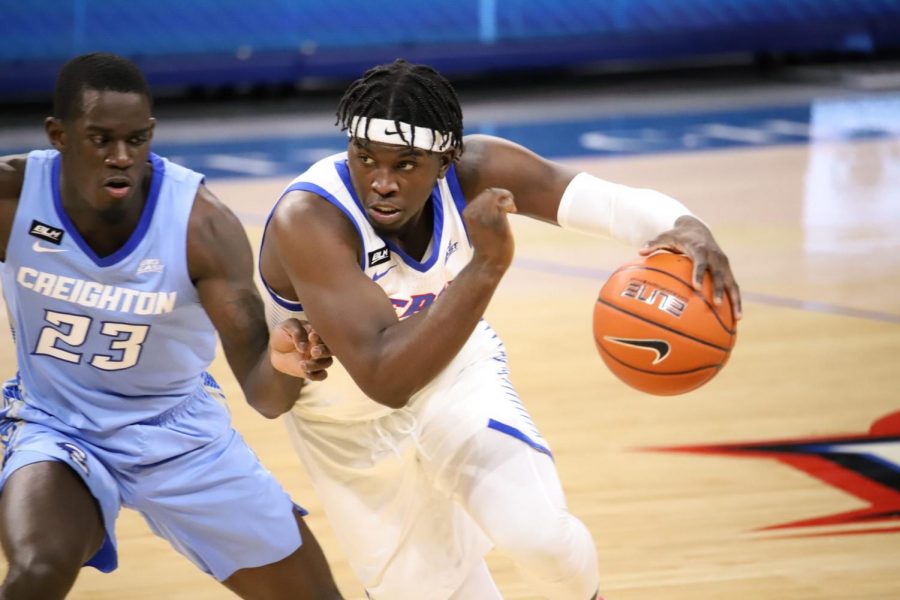 DePaul had all the odds stacked up against them before facing No. 17 Creighton on Saturday at Wintrust Arena.

For starters, the Blue Demons came into Saturday’s game riding an 11-game losing streak against the Bluejays, with the average margin of defeat sitting just above 17.

But the job got even tougher when leading scorer Charlie Moore was ruled out for the game because of a right elbow injury.

And still, the Blue Demons battled with the Bluejays for 40 minutes, but it was not enough to overcome the visitor’s late rally, with Creighton winning 69-62.

“That is something that we have to get better at in our late game execution and our understanding how to get quality stops, and especially those under four-minute games that you got to win.,” DePaul head coach Dave Leitao said.

After DePaul started the game scoring seven points in the first two minutes, the offense then went cold for about the next seven minutes. It also didn’t help that starting center Pauly Paulicap, who had 16 points and 16 rebounds against St. John’s on Wednesday, picked up three fouls in the first three minutes.

So, without Moore and Paulicap in foul trouble, Creighton was able to clamp down on the Blue Demons’ offense, forcing them to miss 15-of-16 shots in 11 minutes. Even though the Bluejays were able to take a 21-10 lead with 6:49 to play in the first half, they didn’t have the same flow and rhythm on offense that they are accustomed to having.

Creighton, who is the best 3-point shooting team in the Big East this season, only knocked down two in the first half and sharpshooter Mitch Ballock was only limited to one point.

“The strange thing about it is that those things have happened at different points during the season where we have guarded and guarded really well, whether it’s just base defense and how we are supposed to play,” Leitao said. “And then scouting report defense and taking some of another team’s attributes away. For this team, it was their fastbreak, early offense and they run a lot of stuff that gets their shooters shots. I thought we took a lot of it away today and had them play deep into the shot clock.”

The momentum began to shift with six minutes to go in the half when Denzel Mahoney was called for a flagrant one foul. Javon Freeman-Liberty knocked down both free throws and that sparked an 8-0 DePaul run.

And then the final two minutes of the first half saw Ray Salnave take over, scoring DePaul’s final nine points and making it a 29-29 game going into the break. Salnave started in place of Moore on Saturday, and made the most of it with a 21-point performance on 8-of-13 shooting.

“I feel like tonight was a night where we needed everybody, as we do every day,” Salnave said. “When a man goes down, we have got to take advantage and opportunities present itself, and I feel that I took advantage of this opportunity.”

Coming out of the break, freshman guard Kobe Elvis started in place for sophomore forward Romeo Weems, who was in foul trouble in the first half. Elvis did a good job of leading the offense, and got his own seven points in the first eight minutes of the half.

The Blue Demons continued to frustrate Creighton on the offensive end, and they eventually built up a six-point lead, 48-42, with just under 13 minutes to play in the game.

The Bluejays, however, stormed back with a 7-0 run to grab a 54-50 lead, and it started to look like the visitor’s would pull away for a commanding victory. But DePaul kept battling and another five points from Salnave put the Blue Demons up 60-59 with 3:16 to go in the game.

But like in multiple other Big East games this season, DePaul failed to get late-game stops and the offense spiraled out of control. They would finish the game by allowing Creighton to go on a 10-2 run to steal a 69-62 victory.

Besides Salnave’s 21 points, Freeman-Liberty was the only other DePaul player in double figures with 13 points. Weems was held scoreless in the second half after scoring six points in the first half.

Leitao did say after the game that Moore has some swelling in his right elbow, and is not sure yet if he will be available to play on Wednesday.

With Georgetown’s win over Providence earlier on Saturday, DePaul is now sitting in last place all alone. The Blue Demons are now 3-7 overall and 1-7 in the Big East. They will conclude their three-game homestand on Wednesday against Xavier.