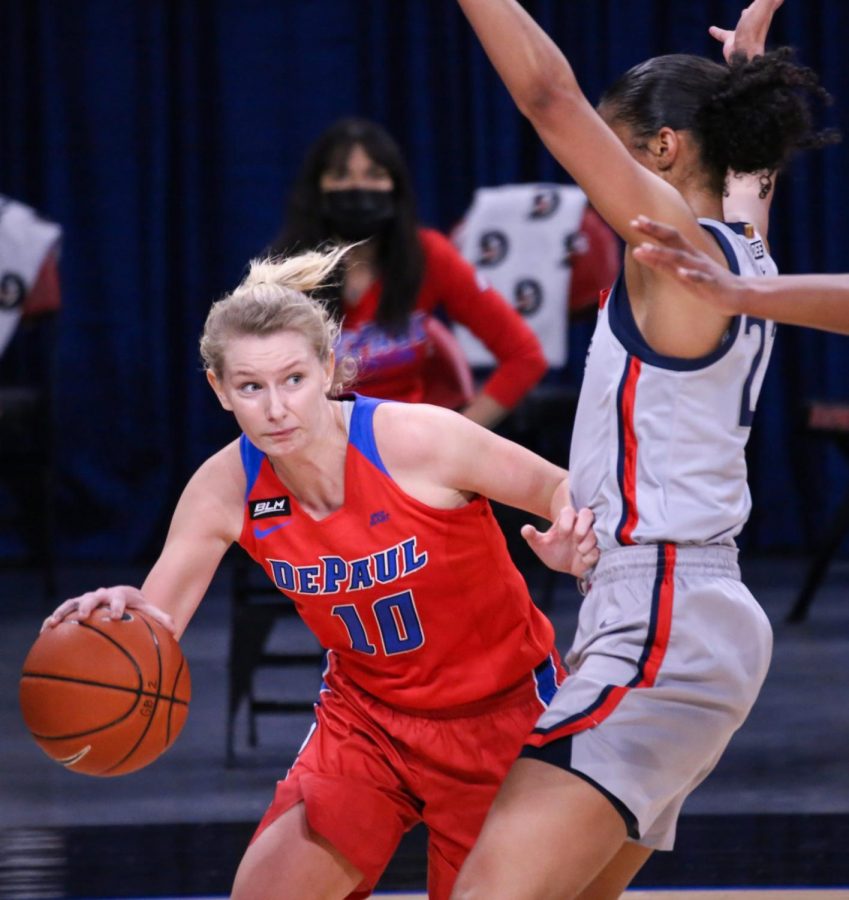 DePaul went into Sunday’s game against UConn having won four games in a row. The Blue Demons wanted to make it five and pull off an upset in the process. The last time these two sides met was back in late December with UConn coming out on top.

And in the first ever women’s basketball game on Fox, the Huskies left Wintrust Arena with a 100-67 victory over the Blue Demons.

The two sides came out firing in the first quarter. It was a back-and-forth affair with the teams trading the lead seven times. At the end of the quarter, DePaul led 22-18 and, at the very least, looked like they were going to make it tough for the Huskies.

But everything changed come the second quarter.

The Huskies completely took control of the game from then on. The rhythm that the DePaul offense had in the first quarter disappeared.

The Blue Demons shot 25 and 27.8 percent in the second and third quarter, respectively. DePaul shot an improved 40 percent in the fourth quarter but by that time the game was well out of reach as they fell to UConn, 100-67.

Part of the reason for the poor field goal percentage was DePaul being forced into taking bad shots in order to get back into the game. This also resulted in the Blue Demons going through long stretches of not being able to score. On the other hand, every shot UConn attempted seemed to go in only adding further desperation.

To DePaul’s credit, despite the scoreline, the team tried to get back into the game. The combination of poor shots and shots not going in, even when a player had a good look, made things much more difficult than they already were.

UConn did a good job of not allowing DePaul to get back into a rhythm and were able to contain the likes of Dee Bekelja and Deja Church. Bekelja only had eight points and a number of them came in the fourth quarter. Church only managed seven points in 37 minutes and shot 2-for-10 from the field.

Morris and Held were the team’s two bright spots. Morris finished the game as the team’s leader in points with 19 to go along with six rebounds. Held was right behind her with 16 points and contributed five rebounds and six assists.

One of the talking points coming out of the game was what DePaul could take away from this defeat and what improvements they could make going forward.

Morris made it a point to stress that right now, they can’t look past it. They have to go look at the tape and see what went wrong.

Head coach Doug Bruno stressed that this game serves as a learning experience for both the players and himself in terms of being able to stay competitive given the scoreline.

The defeat somewhat overshadowed the occasion heading into this game. In addition to this being a match-up between two top 25 teams, it also marked the first time that a women’s basketball was broadcast on national television on Fox. Former DePaul women’s basketball player Sarah Kustok was handling color commentary and Lisa Byington was on play-by-play duties.

This is only DePau’s second loss in the Big East, the other one also to UConn, and drops their record to 9-4 overall. The Blue Demons will look to bounce back as they go on the road to face Seton Hall on Thursday.