DePaul’s offense stalls out in the second half at Butler, resulting in a 68-58 loss 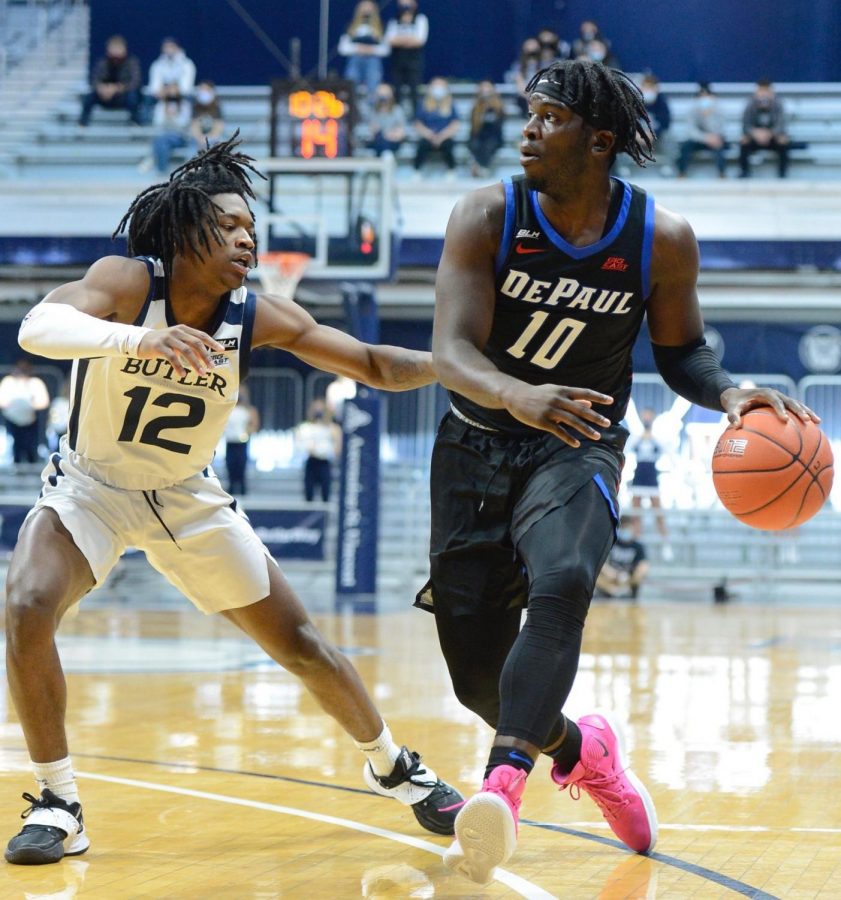 DePaul senior guard Ray Salnave looks for a pass against Butler on Saturday at Hinkle Fieldhouse.

In search of only its second Big East win of the season, DePaul headed to Hinkle Fieldhouse on Saturday to take on the Butler Bulldogs.

The Blue Demons’ offense struggled to score after a strong start in the first 15 minutes of the game, resulting in a 68-58 loss. DePaul has now lost three straight games after beating Marquette on Jan. 23.

“Obviously not happy and disappointed again as we try to put ourselves in position to win basketball games in this league,” DePaul men’s basketball head coach Dave Leitao said. “Just too many possessions where solidarity, run solid offense, playing solid defense and stringing those together didn’t happen the way we need to, particularly when we got up and then they came back at us.”

The Blue Demons had a week to prepare for Saturday’s meeting with Butler after they had their game against Xavier postponed because of Covid-19 issues in the Musketeers’ program. So, DePaul came out in the first half playing with energy and intensity on the defensive end.

Butler only scored four points in the first eight minutes, with DePaul forcing them to take tough shots over the defense. With the strong start on defense, the Blue Demons were able to go on a 10-0 run to grab a 13-4 lead.

The strong start continued for the road team in the following couple of minutes, with DePaul increasing its lead to 12, 18-6, with 10:09 to play in the first half. The offense began to slow down towards the middle of the half, allowing the Bulldogs to slowly get back into the game.

After senior forward Pauly Paulicap converted on a jumper with 8:57 to play in the half, the Blue Demons only scored nine more points in the first half — with junior guard Javon Freeman-Liberty scoring all of them.

Butler used its own 10-0 run in a three-minute stretch to get back into the game, with Bryce Golden and Chuck Harris leading the charge. A free throw by Aaron Thompson with one second to play in the half gave the Bulldogs a 30-29 lead going into the break.

The Bulldogs opened up a nine-point lead, 48-39, following a 7-0 run from the 14-minute mark to the 12-minute mark. DePaul tried to get back into the game and Leitao used different lineups to spark a run, but the Bulldogs always had a basket or two to keep the Blue Demons at bay.

Freshman David Jones made his DePaul debut on Saturday, scoring his first two points on his first shot attempt. Besides Freeman-Liberty’s 26 points, no other DePaul player scored in double figures — with sophomore forward Romeo Weems in second with eight points.

“You scheme how you want to play, how you want to defend, whatever, but at the end of day, guys have to be able to play offense and play it well,” Leitao said. “When only one guy does that it hurts your chances quite obviously.”

Senior guard Charlie Moore, who missed DePaul’s last game with a right elbow injury, scored five points on 2-of-8 shooting in his return to the starting lineup. Butler also shot 36 free throws and converted 24 of them, while DePaul only took 16 free throws and made nine.

The closest DePaul would get in the final five minutes is within six points multiple times. Butler iced the game with four free throws to complete the season-sweep over the Blue Demons.

DePaul is now 3-8 overall and 1-8 in the Big East, which puts them in last place in the conference and two wins behind Georgetown. The Blue Demons’ next scheduled game is against Xavier on Thursday.