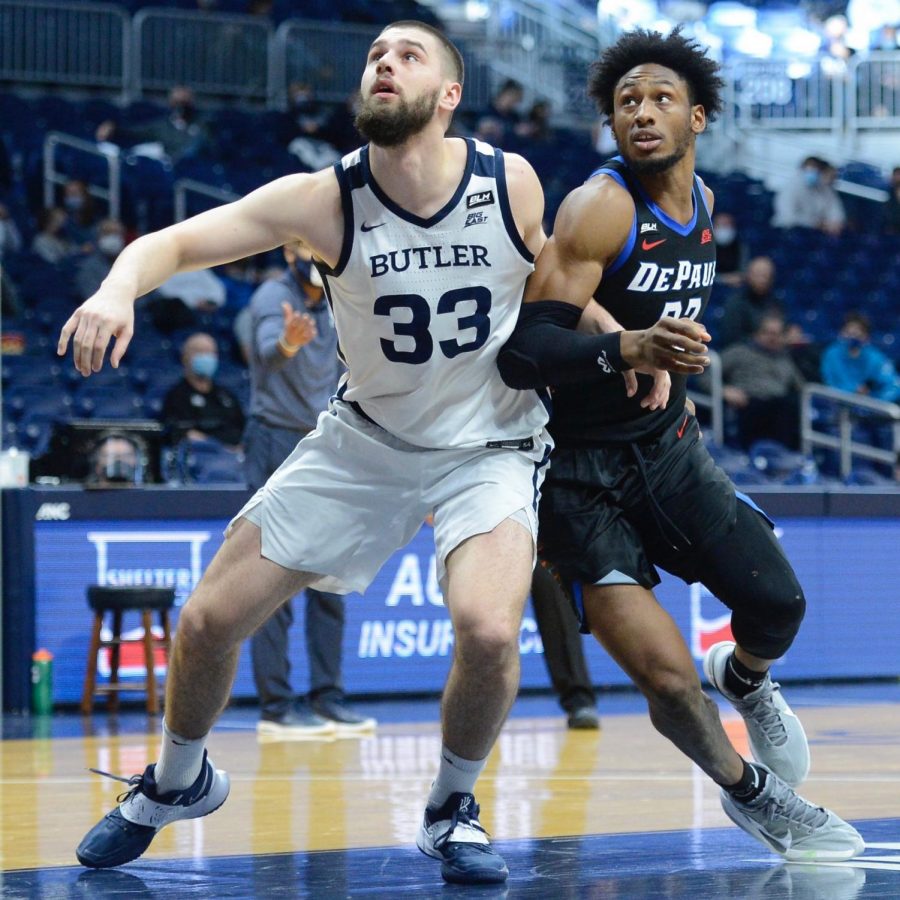 College basketball games can be decided by either coaches making in-game adjustments or players taking over when their team needs them to.

But when the talent gap between two teams is even and there isn’t much to separate the two sides, then the coach who makes the better decisions will likely see their team win.

Well, when DePaul and Butler met on Saturday at Hinkle Fieldhouse, the talent difference on the court wasn’t large;an argument could be made that the Blue Demons are more talented this season.

And it was the Blue Demons who got off to a good start, taking an early 18-6 lead. But as soon as Butler Head Coach LaVall Jordan made adjustments and put in a more athletic lineup, DePaul didn’t adapt and it resulted in the Bulldogs taking a 30-29 lead into the break — eventually winning 68-58.

“We were defending and we were energized with a lot of deflections, and those deflections kind of led us to get down and get a couple of running baskets,” DePaul men’s basketball Head Coach Dave Leitao said. “One of our issues has been when we don’t get stops, it affects our offense. When we don’t play good offense, it affects our defense and that is both a physical and emotional issue. When we got it up it was because good defense led to sustainable offense. And when they came back at us, we broke down and did not do what we had been doing on the other end.

Like Leitao mentioned, DePaul did start the game by playing suffocating defense and that led to transition offense. Butler only scored four points in the first eight minutes.

But, like most teams do against DePaul, the Bulldogs made a couple of adjustments and quickly got back into the game. Jordan put guard Chuck Harris into the game and the freshman repaid his coach with 15 points in the first half.

As a team, Butler didn’t shoot particularly well from the 3-point line in the first half, only 4-of-12, but Harris poured in three of them. And all of sudden, the inspired defense that DePaul played in the first 10 minutes started to soften up.

Naturally, a coach would make adjustments at halftime to get his team back on track. Not Leitao. Instead, DePaul played worse in the second half as its offense only scored 27 points and the defense gave up 38.

Besides the 26-point performance from Javon Freeman-Liberty, no other DePaul player finished in double figures on Saturday. The Blue Demons have only had two Big East games this season where three players score 10 or more points.

Maybe that would result in Leitao looking to change his gameplan or look to try different things moving forward. Again, not Leitao.

“You scheme how you want to play, how you want to defend, whatever, but at the end of day, guys have to be able to play offense and play it well,” Leitao said. “When only one guy does that it hurts your chances quite obviously.”

How about we look at the numbers and see how well these “schemes” are working this season:

For starters, DePaul is 1-8 in the Big East — good enough for last-place.

What about scoring offense? 10th out of 11 teams, only Butler is worse than the Blue Demons.

What about scoring margin? 11th.

What about field goal percentage? 11th.

What about assists? 11th.

As Albert Einstein once said, “the definition of insanity is doing the same thing over and over and expecting different results.” That is DePaul men’s basketball.

The scheme isn’t working and it hasn’t been working for years now, even as DePaul brings in new players every season. It’s why the Blue Demons are on pace to finish in last-place for the fifth consecutive season.

Butler doesn’t have a talent advantage over DePaul, but they have been able to sweep the Blue Demons this season because their coach found different ways to get his team going when they were struggling.

On Saturday, Butler shot 20 more free throws than DePaul as the Bulldogs made it an effort to attack the basket and get to the free-throw line.

“I think Butler has played a certain style of basketball for many years,” Leitao said. “So, you got to prepare your team to withstand some of what happens, being more physical than someone else. So, you just got to play through it as best you can and strong minds, strong bodies are able to withstand that.”