Doctors who say no to opioid use face threats from patients 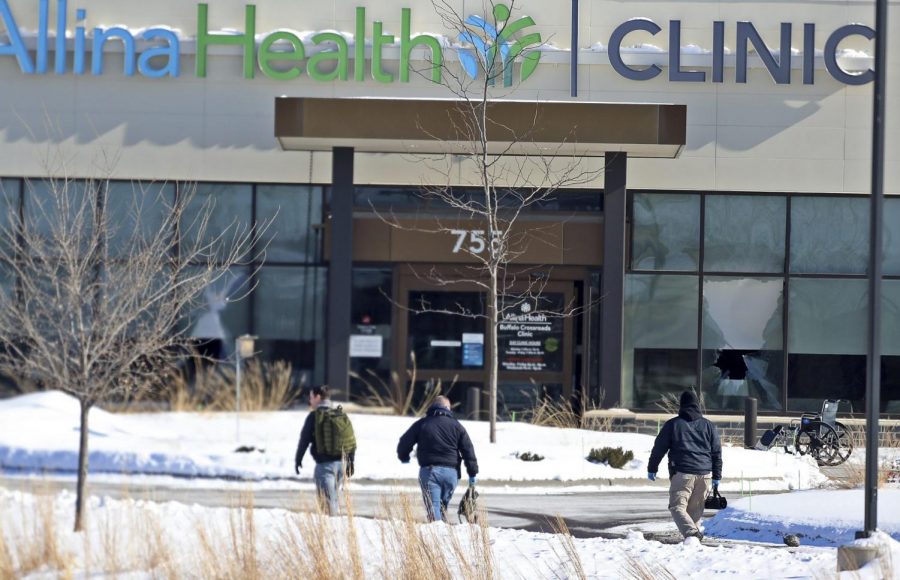 In this Tuesday, Feb. 9, 2021 file photo, law enforcement personnel walk toward the Allina Health clinic where multiple people were shot in Buffalo, Minn. Doctors say they're facing increasing threats of violence for refusing to prescribe opioids or trying to wean patients off the addictive painkillers. The issue was underscored by Tuesday's shooting at the Minnesota clinic.

One patient threatened to shoot Dr. Terry Hunt if physical therapy didn’t relieve his pain as effectively as opioids did. Another harassed his staff, then roamed a hospital searching for Hunt after being told he would be weaned off painkillers he had used inappropriately.

Hunt was unharmed, but shaken enough to ask the central Illinois hospital system where he worked to dismiss both patients.

So when he heard about Tuesday’s attack at a medical clinic in Buffalo, Minnesota, that left one person dead and four injured, “the first thing I assumed is that it was something to do with pain medication,” said Hunt, who now works for the Mayo Clinic in Rochester, Minnesota, and a Mayo Clinic Health System facility in Red Wing, Minnesota. “It makes us ask about our own workplace: How secure are we?”

Authorities said Gregory Paul Ulrich, 67, was angry about his medical treatment before he shot five workers and detonated three apparent pipe bombs at an Allina Health clinic. A police report says he had threatened a similar mass shooting in 2018, allegedly as revenge against people who he said “tortured” him with back surgeries and prescribed medication.

A former roommate said Ulrich became upset when a doctor stopped prescribing painkillers, and that Ulrich also used other drugs and had untreated mental health issues. Law enforcement and the health system have not addressed the specifics of Ulrich’s treatment or medications.

Doctors who treat pain say threats of violence escalated markedly in recent years as mounting legal and regulatory pressure stemming from the deadly opioid epidemic led many to prescribe alternatives and taper their patients off addictive painkillers.

While some patients benefit from careful use of opioids, and doctors don’t want to stigmatize them, many would be better off treating pain with other therapies, experts say. But many become addicted to the drugs that are often intended for short-term use following surgeries.

“It hijacks their brain,” said Dr. Carrie DeLone, regional medical director at Penn State Health Community Medical Group. “They don’t see themselves as having a problem.”

Pain specialist Dr. Andrew Kolodny, a professor at Brandeis University and a founder of Physicians for Responsible Opioid Prescribing, said patients are convinced that opioids are treating their underlying problem because if they try to go without a dose or as their previous dose wears off, “they’re feeling horrible, agonizing pain,” when it can be the withdrawal that is causing pain hypersensitivity.

“It’s much easier to give the patient what they want. You write the prescription … they walk out the door happy and there are no problems. To try and help a patient taper down … is much harder,” Kolodny said.

And when a doctor says no, things can turn ugly.

Almost half of pain specialists surveyed during a violence education session at a 2019 American Academy of Pain Medicine meeting cited opioid management as the reason they had been threatened, said Dr. W. Michael Hooten, president-elect of the organization.

In response to threats, doctors have dismissed patients. But they have also installed alarm systems and panic buttons and set up exams rooms so doctors are closest to the door. Some even advocate carrying weapons, said Hooten, noting that smaller clinics are at greatest risk because they might not be able to afford security.

After his 2018 threat, police took Ulrich for a mental health evaluation, and Allina took legal action to bar him from the company’s property. A restraining order prohibited Ulrich from contact with the doctor or going into the clinic and nearby Allina-run Buffalo Hospital, where he once frightened a nurse so much that a colleague hit a panic button for help.

Police said they had had no recent interactions with Ulrich that would have raised alarms before the attack in Buffalo, a small city about 40 miles (65 kilometers) northwest of Minneapolis.

St. Joseph County, Indiana, Prosecutor Ken Cotter said he didn’t know that such threats were common until 2017, when a man shot and killed a doctor who refused to prescribe opioids to his wife. Michael Jarvis ambushed Dr. Todd Graham in a parking lot hours after the appointment, said Cotter, adding there was evidence that Jarvis also was using opioids. Jarvis took his own life soon after.

Before that, “I do not recall ever reading a threat report” from a doctor, said Cotter, who said he received calls from about 20 doctors after the shooting telling him how common they were. “They took (threats) as a cost of doing business.”

Cotter said about a dozen meetings were held with doctors, law enforcement officials and others to discuss how to keep doctors safe, including deescalating tense situations, but also alternatives to opioids, disposal of old medications, and tackling the addiction problems that plague their communities.

“When you’ve got doctors calling to say we have to do something, this is … literally our whole community’s crusade,” Cotter said.

Kolodny, from Brandeis, said he has been compared to Hitler, threatened on Twitter, and a bag of nails was mailed to his home. Last month, protesters carried signs near his office demanding that he be fired because of his work advocating less opioid use and helping states sue opioid manufacturers.