The role of Black storytelling in poetry 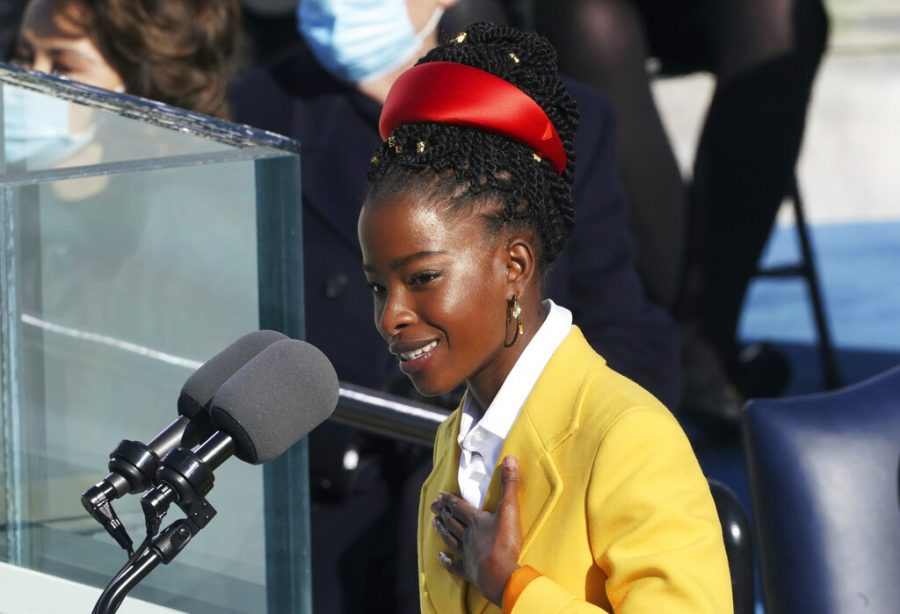 FILE - In this Wednesday, Jan. 20, 2021, file photo, Amanda Gorman delivers a poem after Joe Biden was sworn in as the 46th president of the United States, at the U.S. Capitol in Washington. Gorman, the 22-year-old poet who stirred America at the inauguration of President Joseph Biden, again commanded the spotlight on one of the country’s biggest stages, the Super Bowl. Gorman read an original poem Sunday, Feb. 7, 2021, during the pregame festivities in Tampa, Fla. (Erin Schaff/The New York Times via AP, Pool, File)

It has been almost one month since Amanda Gorman gave her inaugural poem on the Capitol steps.

Gorman, the youngest inaugural poet in history and first-ever National Youth Poet Laureate at the age of 22, told the audience of this nation the kind of America she’d like to live in. Through her words, she created a new set of standards — not just for the Biden administration, but for all members of the United States.

Many people have recounted Gorman’s poem, “The Hill We Climb,” as their favorite moment of the inauguration — and as a moment the country desperately needed. Some would say Gorman’s performance has put poetry back in style, but others assert that it’s never left.

“We just witnessed a young poet read at the inauguration and at the Super Bowl, of all places,” says Mark Turcotte, a DePaul writing instructor and poet of the Ojibwe tribe. “That fact seems to make the case [of poetry’s current popularity]. But, that is the result of what has already been happening at the ground and street-level… this recent national exposure is good, but it is not the pinnacle.”

The issue with this, according to Black, is that poetry — specifically Black poetry — is being marketed with this “newfound trendiness.” But her hope is that people’s appreciation of Gorman’s poem will encourage them to seek out other poetry driven by Black experiences.

The benefits of said conversations could further an understanding of the value of poetry. For DePaul English professor Chris Green, the value lies with the hope poetry can offer.

“A poem renews the possibility of human imagination in a sphere where it is endangered,” Green said. “[It] makes us realize what Wordsworth knew: our ideas are made of feelings. Amanda Gorman’s poem made us feel deeply what America at its best represents.”

Black believes it comes down to what poetry does in action.

“Poetry is really just about storytelling… especially in cities like Chicago where everything is so segregated and so redlined — it plays a big part in breaking barriers,” Black said. “It’s the most natural way to learn about someone — where they come from, who they are, the intersections of their identity. It forces you to zone in and focus and listen to what makes a person them. It passes the idea of empathy.”

Despite this, many people are not quick to brush up on iambic pentameter or read haikus in their spare time. With novels like poet Ben Lerner’s “The Hatred of Poetry” or Marianne Moore’s “Poetry” (where she states, “I too, dislike it”), it’s no secret that people often have a distaste for poetic works.

Black explains that the issue begins in the classroom. She says that the current curriculum focuses on Eurocentric poetry, which can present a language barrier with students. For one, the text can be difficult to understand but it doesn’t provide experiences that are relatable for students of color. Additionally, she believes it’s important for educators to understand that poetry doesn’t have to be so limited.

“Writing a poem, that is poetry. Writing a story is a poem. I teach my students how to finesse [their] way onto a bus when [they] don’t have anything on [their] Ventra card, that is a poem. Our natural artifact of language, our natural etymology, the words and slang that we create — that is all poetry,” Black said. “I think when you have a eurocentric curriculum, you don’t understand that. You don’t understand the beauty of creation.”

DePaul English professor David Welch explains that it’s not just what’s being taught that’s the problem — but who’s teaching it.

The key relies in presenting poetry that students can relate to. The consensus is that students will enjoy poetry and inherit its powerful properties only if they can understand it. Meaning, there has to be representation and curation involved with our curriculum.

That way, appreciation of a poem like Gorman’s won’t be an isolated incident.