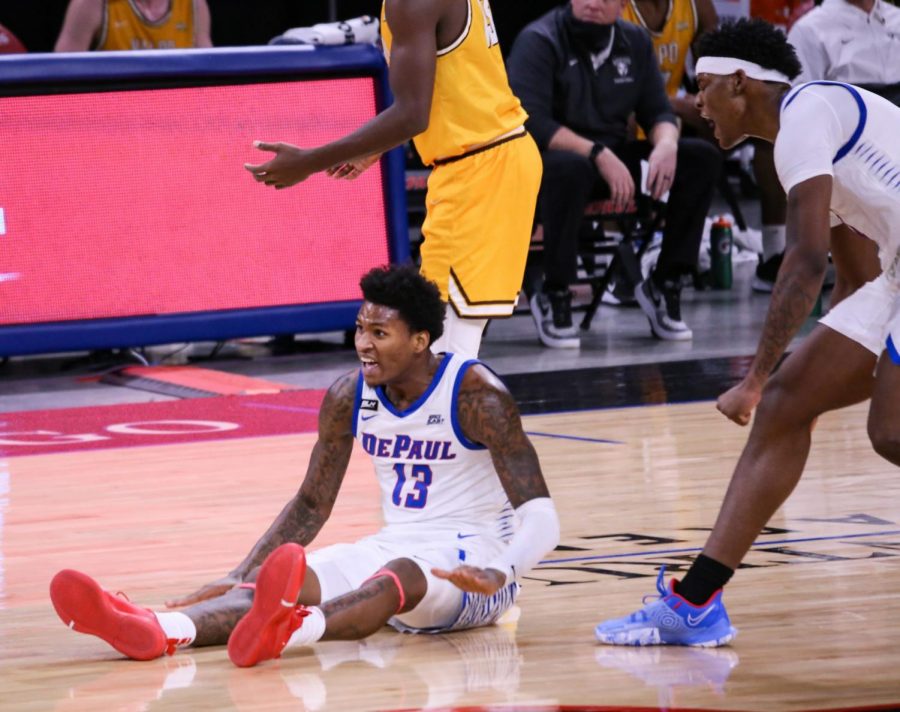 Darious Hall and Romeo Weems celebrate after a play during DePaul's 77-58 win over Valparaiso on Saturday at Wintrust Arena.

It’s going to be tough sledding for DePaul to make the NCAA Tournament this season unless they can win the Big East Tournament in March. But the Blue Demons can still play spoiler as other Big East teams are trying to put themselves in a good position for Selection Sunday.

And DePaul did just that on Saturday at Carnesecca Arena, defeating St. John’s 88-83 and snapping a five-game losing streak. The Red Storm needed to defeat the Blue Demons to keep their NCAA Tournament hopes alive, but DePaul’s 58 points in the paint proved to be a difficult task to overcome.

“Head back to Chicago tonight after being on the road since Tuesday, so I think everybody is just anxious to get back home,” DePaul men’s basketball head coach Dave Leitao said. “ Happy and proud of the guys for their effort.”

The Blue Demons got much needed help with the return of senior guard Charlie Moore, who missed the last two games with a left knee injury, sophomore guard Oscar Lopez Jr., who has been out since Dec. 27.

Both came off the bench and played a vital role in DePaul’s win on Saturday. Moore scored 24 points, dished out eight assists and grabbed six rebounds. Lopez played 20 minutes and scored 10 points.

“Charlie after not playing for a couple of weeks, [scoring] 24, eight assists and six rebounds, was huge, particularly controlling our offense, making plays, getting into the paint, taking shots,” Leitao said.

It was a contrast in style of play between both teams, with the Blue Demons attacking the rim and the Red Storm settling for 3-point shots. It was DePaul’s style that eventually won and that helped them build a sizable lead in the first half.

DePaul took an early 9-3 lead thanks to a 7-0 run before the Red Storm responded with an 8-0 run. But the Blue Demons began to grab control when Moore and Lopez entered the game, sparking a 15-3 run that would give DePaul a 29-19 lead.

For St. John’s, it was the play of Julian Champagnie that helped them get back into the game in the first half. He finished the first half scoring 17 points and knocking down three 3-pointers. The Red Storm were able to close the gap in the final couple of minutes, but DePaul held a 41-40 advantage heading into the break.

“So, a lot of credit and it kind of gives us another dimension that we haven’t had,” Leitao said on Lopez. “I thought at the beginning of the year, if we could have multiple ball handlers and decision makers that we’d be a lot better off offensively. Having him allows us to do that, to have another decision maker and ball handler.”

DePaul has become used to playing well in the first half, only for them to lose that lead and momentum in the second half. Not this time, though.

The Blue Demons kept punishing the Red Storm inside the paint to start the second half, going on a 17-4 run inside the first eight minutes and scoring 12 points near the basket. Freshman forward David Jones also provided the Blue Demons with positive minutes off the bench, scoring nine points and grabbing three rebounds.

“He’s not afraid of anything,” Leitao said. “He’s got a ways to go to kind of get in shape and get a feel and all those kind of things that doesn’t happen when you join a team as late as he did. He’s got that one thing that a lot of guys don’t have, which is a tremendous amount of self-belief and he’s got the skill package to go with it. But he’s still learning. He took an ill-advised three again today, and he went for a steal late. Those things happen when you just don’t know, you are just playing basketball.”

Jones played big minutes in the second half and Leitao trusted him to be in the game in the closing minutes. DePaul allowed St. John’s to get some life after building a 15-point lead, 66-51, and Moore and Leitao were called for technicals on two separate occasions.

But the closest that St. John’s would get to DePaul was within five points multiple times. Sophomore forward Romeo Weems scored six straight points for the Blue Demons to put the game out of reach, and DePaul knocked down 10 free throws in the final minute to seal the victory.

The Blue Demons committed 24 turnovers, but that did not come back to bite them as it usually has in the past. DePaul also outscored St. John’s bench 49-32.

DePaul still has one more game left in its three-game road trip, at Creighton on Wednesday, before closing out the regular season with two home games against Georgetown and Marquette.