‘I think that it’s probably the worst year since I’ve been a fan’: DePaul fans frustrated with another disappointing season 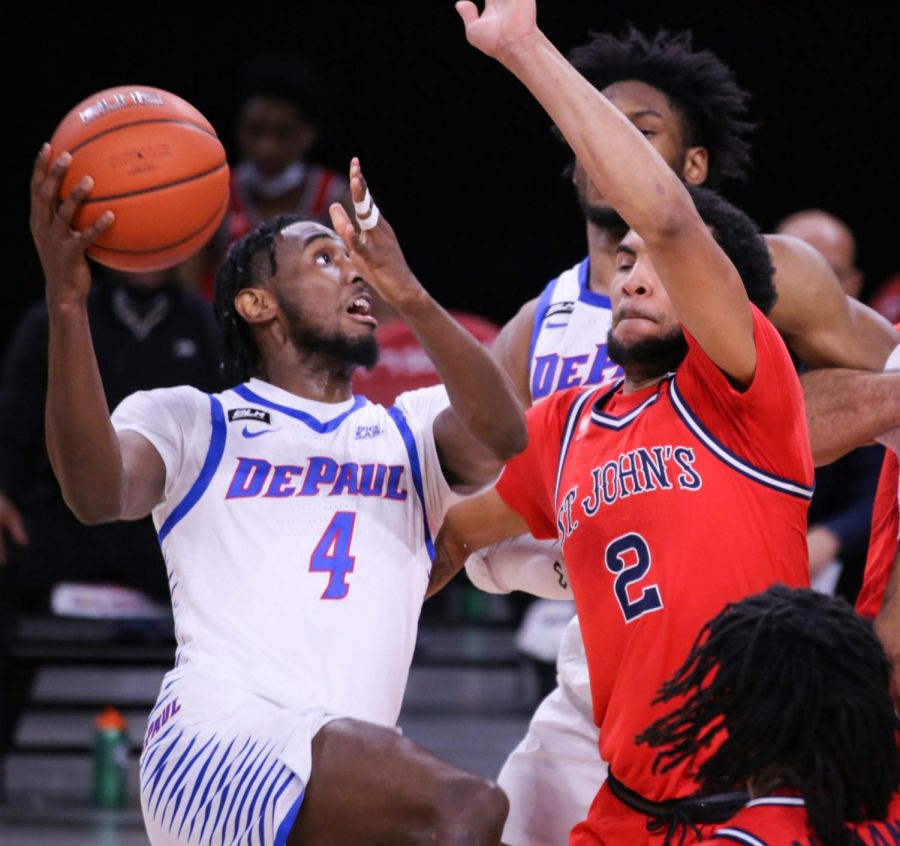 DePaul junior guard Javon Freeman-Liberty goes up for a layup during a game against St. John's at Wintrust Arena.

The month of February in college basketball is when games start holding more meaning. A good week can take a team from outside the NCAA Tournament back into the picture. And a bad week can end a team’s season if they aren’t careful.

For fans,February is the start of eight exciting weeks of college basketball, especially for supporters whose teams are fighting to make the NCAA Tournament. The pressure increases. The games become closer. Life on the bubble becomes more nerve-racking.

That is the life of good college basketball programs.

For DePaul men’s basketball fans, however, February means watching the standings to see if the Blue Demons will finish in ninth, 10th, or now, in 11th. By the time it reaches the fourth month of the season, DePaul is usually out of the race for an NCAA Tournament spot. Instead, fans can start looking forward to next season.

That’s why when DePaul brought back Billy Blue Demon on Feb. 12 for fans to buy merchandise, it served as a reminder to what the men’s basketball program used to be: winning.

The old logo, also known as BBD, was part of the Blue Demons’ fabric for multiple decades until it was replaced in the 1990s and shelved before athletic director DeWayne Peevy brought it back recently.

“I’m a longtimer, so I like the old logo,” said Logan Simios, a DePaul men’s basketball fan who has been a long-time season ticket holder. “I think it should be part of the mix of the logo, so you have the shield and you have that one be your main logos. Do I think it’s going to change the image of the program? No. But I think it’s kind of a nice little marketing energy boost.”

Billy Blue Demon was around when the Blue Demons were one of the most successful programs in the country. Head Coach Ray Meyer took the team to the Final Four in 1979. The program also had some of the country’s best players like Mark Aguirre and Terry Cummings.

Fast forward to 2021, and the program is a shell of its former glory days.

“I think that it’s probably the worst year since I’ve been a fan, which is like seven years now, because it just kind of feels like there’s no hope in this year,” DePaul fan Joe Breslin said. “Every year we kind of had a little hope going into games. We were probably going to lose, but we could win. I don’t feel like that now.”

DePaul hasn’t made the NCAA Tournament since 2004. They have only had two winning seasons since then. The move to the Big East in 2005 was supposed to elevate the status of the program, instead it has made DePaul the team that everyone takes advantage of to boost their records.

This season has proven to be extremely challenging because of the Covid-19 pandemic. The team didn’t start its season until Dec. 23 because three different pauses forced them to cancel or postpone the first 10 games.

The play on the court has also been tough to watch at times, with the Blue Demons only breaking 70 points four times this season. A win over St. John’s on Saturday improved DePaul’s record to 4-10 overall and 2-10 in the Big East.

“You can see some of the guys who are really hardcore fans are not even excited to watch games anymore,” said Patrick Sperry, who first graudated from DePaul in 1997 and then received his bachelor’s degree in 2000. “And that’s sad. It’s really hard to even get excited to muster up energy to watch, and that’s not good. That’s not good for the program.”

Logan Simios has been attending DePaul games for multiple decades, and he also agrees that it’s sad to see how far the program has fallen. The desire that some fans had in the past has now diminished because the program isn’t playing for much when February rolls around.

“It’s really just more laid back when I watch the games versus when I normally used to watch the games, I stand up in my family room and watch them like I’m on the bench or something,” Simios said. “But I don’t have that desire like I did in the past here at all. It’s just sad to see the program reach these lowest levels.”

Breslin, Simios and Sperry believe that DePaul’s issues start with the head coach, Dave Leitao, who is on pace to finish in last place for the fifth consecutive season. He was the last coach to take DePaul to the NCAA Tournament before he left for the University of Virginia in 2005.

Leitao returned in 2015 but has not had anywhere near the same success he had during his first stint with the program. All three fans want to see DePaul make a head coaching change in March to change the direction of the team.

“It’s Dave’s fault for every year having to do this patchwork roster of transfers,” Breslin said. “So, it takes them a while to get into a groove. Why am I always hearing that we have a lot of people who haven’t played together? Why?”

So, for DePaul fans, what is there to look forward to these last three weeks?

“I do enjoy seeing what the young guys bring to the table,” Sperry said. “Between Kobe [Elvis], David [Jones] and seeing Romeo [Weems], I just like seeing those guys try to develop and see what they can do. I hope that they look into the future a little bit and make sure that guys are coming back.”