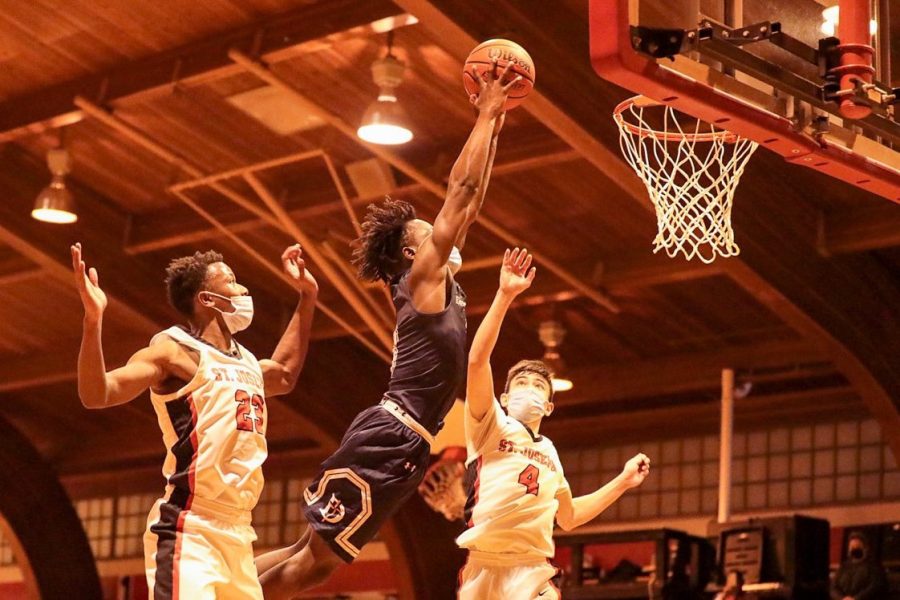 A DePaul Prep boys basketball player goes up for a layup during a game against St. Joseph's on Feb. 8

March is usually the best and most exciting time of the year for Illinois high school basketball — it’s when the state conducts its two tournaments to crown the best teams that season.

But because of the Covid-19 pandemic and the season starting later than usual, there will be no state tournament in 2021. As a result, when the official season ends on March 13, no team will be crowned a champion this year.

For some of the state’s usual boys’ basketball powerhouses, like DePaul Prep, Simeon and Whitney Young, they live and breathe for the opportunity to win a state championship. And that’s why former Fenwick and New Trier coach Rick Malnati has organized an eight-team tournament for March 12-13.

All eight teams are currently featured in the top 10 of the Chicago Sun-Times’ Super 25 rankings, including DePaul Prep’s Rams. For them, this will provide an opportunity to play some of the state’s elite teams in an environment that will feel like a run to the state championship.

“These are really eight great teams who are in the top 10 in the city, so it’s great to be included in these teams because Gorden Tech has got a rich history of basketball,” Rams’ head coach Tom Kleinschmidt told The DePaulia in a phone interview. “When it became DePaul Prep, we needed to build on that, and now DePaul Prep is one of the elite programs in the city, so we are very proud of that. We are ecstatic to be mentioned with the likes of Fenwick, Whitney Young, Simeon, Mundelein, St. Patrick, Notre Dame.”

If the name Tom Kleinschmidt rings a bell to DePaul men’s basketball fans it’s because he played for the program from 1991-95 and was the first player in school history to win a conference Player of the Year award.

He has been coaching DePaul Prep since 2012 and has established a winning program with the Rams, which includes winning the Chicago Cathloic conference in the 2018-19 season.

This season, however, there are far fewer games being played because of the pandemic. For a long time it didn’t seem like Illinois would play high school basketball at all this year, but the state saw notable improvements in its Covid-19 numbers and allowed for basketball to start in late January.

But DePaul Prep was hit with the realities of the pandemic right away, having to go on pause after someone from St. Joseph’s tested positive for the virus — the first team that the Rams  played this season.

“We played our first game Feb. 8, we played at St. Joe’s,” Kleinschmidt said. “It was good to be back in the gym, and then we were exposed to Covid during the game. So, we went to quarantine after the first day. It was a wake-up call right away. And then we just got off quarantine on Tuesday, so [Wednesday] was our second practice. We are back in the gym getting our legs back, and we play St. Ignatius on Friday night.”

The Rams took care of St. Ignatius, winning 59-38, before returning to action a day later and defeating Marian Cathloic 59-33. This year’s Rams team is as talented as any team in the past, with multiple seniors headed for college basketball next season.

Even though these players won’t get another chance to play a full schedule, Kleinschmidt is still excited to coach them one more time this season.

“We kind of looked ahead and said if we can keep everybody healthy and stay together, it’s more of a team that you may get once every 20-25 years as a coach,” Kleinschmidt said. “Firstly, because of the character of the kids. And then secondly, the talent that they hold. I’m thrilled that, whether we play five more games or 15 more games, that I have the opportunity to coach these young men at this time in their life. I just kind of tell them that don’t waste an opportunity because every game could be your last, so I think they bought into that and they have been great in practice.”

Most of the preparations for games this season start with Zoom meetings and online film sessions to scout the opponent. For some teams, not having much bonding or practice time can impact their chemistry. But DePaul Prep already has a veteran team that is helping them through this season.

Kleinschmidt has built a program where his players buy into the process, and that is particularly helpful this season when so many outside things can derail your season.

“I think the biggest thing we did was really build a culture of accountability and respect,” Kleinschmidt said. “We don’t lie to the kids, we do coach them. We are going to put our hugs around you when you need a hug, but we are also going to tell you the truth and you may not like it, but when you go home, you are probably going to agree with it if you are being truthful with yourself. I think that’s why we have a strong program, our culture and our kids. We don’t have to worry about a lot of things. We know we are going to be ready to play. We know guys are going to be ready to practice, and that starts with our senior leadership.”

The tournament in March will be a strong test for the Rams to see how they stack up with some of the other elite teams in the state. Even though there will be no official champion crowned, bragging rights will be on the table.