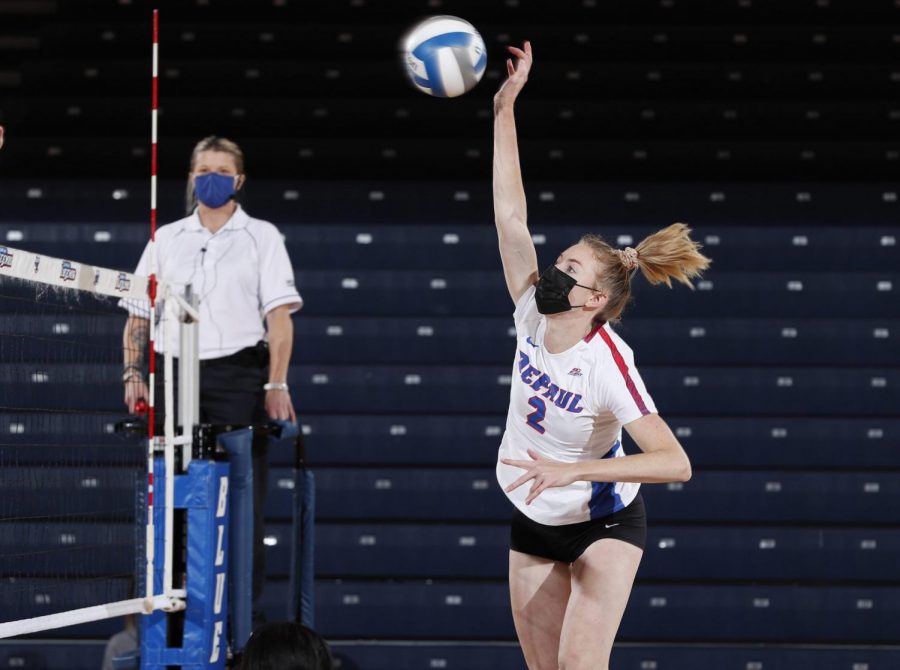 DePaul senior Emma Price goes up for spike during a match against Xavier on Saturday at McGrath-Phillips Arena.

DePaul’s women’s volleyball team went toe-to-toe with Xavier, splitting their two five-set matches while also getting their first victory of the season.

DePaul (1-3, 1-3) entered Friday without having won an individual set in 2021. When they stepped on their home court at McGrath Phillips Arena for the first time all year to face Big East foe Xavier, their fortune changed.

DePaul got off to a fast start and never looked back, taking the first set of the two-day series 25-19. Unfortunately for the Blue Demons, Xavier (3-4, 1-1) had no intentions of going away in what would turn out to be a very long match that went down to the wire.

The two teams traded sets until the final set, where it was all on the line. Xavier took the second set 25-16, DePaul held on for the third, 25-23, and when the Blue Demons were on the precipice of their first victory, Xavier stifled a six-point Blue Demon run to hold on in the fourth, winning 25-21.

When Xavier got off to a fast start in the fifth set, DePaul’s efforts to thwart their run proved futile as Xavier took the set 15-12, and the match 3-2. With a 2-1 lead dissipating, and victory within reach, DePaul needed to quickly shift their focus to Saturday despite the defeat.

There was still much to be excited about for DePaul head coach Marie Zidek, as sophomore Bailey Nelson had a phenomenal game with 18 kills alongside fellow front-liners Donna Brown and Emma Price, who added 11 and 13 kills themselves.

DePaul’s young talent was also promising on Friday. Freshman Phoenix Lee had 35 assists and Rachel Krasowski, who had a breakout week versus No. 24 Marquette, added 24 additional digs for the back line.

It was Xavier’s tremendous scoring streaks, and front-line might, with a 21-9 block advantage, that did DePaul in for Friday’s matchup.

The Christy Pfeffenberger-coached Musketeers were led by the team’s only setter, sophomore star Carrigan O’Reilly, who had a triple-double with 13 kills, 12 digs, and 45 assists.

The two met again Saturday afternoon. While this match also went five sets long, it looked like it could be over early as DePaul lost their first two sets. The first set went to extra play as Xavier, who trailed DePaul by a slim margin all set long, took their first lead at 25-24 and eventually won 27-25.

Xavier dominated the entire second set except for a six-point run by DePaul to end the set before Xavier took it 25-19. The run gave DePaul momentum to rally though, handling the Musketeers in extra play 26-24 after holding off Xavier’s match point attempt.

In the final set, it seemed nothing could go wrong for DePaul as they jumped out to an 8-1 lead and rode their wave of momentum for a 15-12 set victory to win their first match of the season in an improbable comeback.

On Saturday, DePaul’s front line was a lot more aggressive, able to combat Xavier. They won the block advantage 21-11 and the kill advantage 65-54, both of which were major factors missing on Friday that helped fuel their comeback.

Freshman Jill Pressley had her game of the year with 19 kills, while senior Averie Evans-Allen, who didn’t play on Friday, and Bailey Nelson, contributed 11 kills. Brown showed up big with the game of her season leading with four solo and five assisted blocks.

Xavier junior Norah Painter played well and led the Musketeers with 15 points in the losing effort.

For DePaul, it was a series to build on, as the Blue Demons, who were picked to be third in the Big East preseason rankings, needed a conference victory to get the wheels turning. Since Xavier had a 20-6 all-time record against DePaul, the win broke barriers for a young DePaul team learning how to play together.

DePaul currently has eight games scheduled after their non-conference matchup against Milwaukee was postponed on Wednesday due to a snowstorm. They’ll have to play 10 games in order to be eligible for the NCAA Tournament, something to watch as the season progresses.