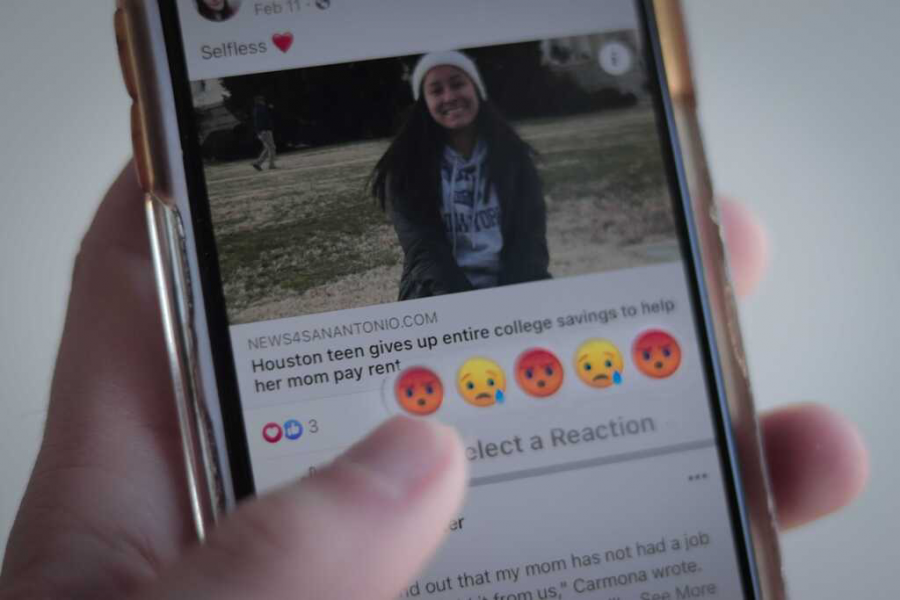 A teen gave up her entire college savings to help her mom pay rent. A man walks 21 miles to work every day with a smile on his face. A doctor forgives $650,000 of life saving medical treatment fees. This kind of feel-good journalism always seems to pop up, hoping to inspire readers and show how great people can be.

Many of these stories tend to be ignoring a glaring fact in their headlines, though. Why is it a teen’s responsibility to give up an education to help pay rent during a pandemic –– or at any time? Why does a man need to walk that far to earn enough money to survive? Why does a doctor need to decide if someone should go into crippling debt to receive life saving treatment? When I read a story like these, it just makes me angry. These stories are not good news.

“There are categories of good news stories that are legitimately enlightening and inspiring, but the general phenomenon of a small victory that shows a larger sense of defeat — that is not good news,” said DePaul sociology professor Noel Barker.

Barker gave an example of a story he had seen recently about people opening food banks in their communities. “The emphasis is certainly on the good works,” he said. “And they are good works, but in the long lines of cars, someone trying to get a small box of food, it certainly doesn’t make me feel good.”

Another category of human interest stories is the celebration of small accomplishments without discussing why a larger goal is unattainable.

“For example, the attention given in poor neighborhoods to things like fifth-grade grade graduation,” Barker said. “The message is that apparently it is rare for people to graduate from high school, and that, of course, is the distressing and demoralizing kind of context for it.” Instead of writing a story about how inspiring it is for people to reach a smaller goal, perhaps it would be more beneficial to report on ways to combat the problem.

Human interest stories are nothing new to journalism. They have been prominent since the 1800s as important stories that connect readers to everyday people.

They should be written to evoke emotions in people and demand action from those that are causing people to suffer — not distracting people from the real issues by making light out of someone’s tragedy.

Evensen gave the example of Joseph Pulitzer, who wrote a human interest story about a woman that died when raw sewage backed up in her apartment.

“He demanded accountability,” Evensan said. “He shamed his readers by asking them what kind of a civil society tolerates the killing of innocent women by the behavior of predatory landlords and a housing commission that refuses to hold them to account. The story led to reforms in housing laws in New York City.” This is how human interest stories dealing with tragedy should be written – to raise awareness about the issue instead of distracting from it.

Somehow, mainstream journalism has lost the motivation to call out the flaws in the system, and asks us to overlook them. In the case of the Texas teen that gave up her college tuition to her dream school to help her mom pay rent, the author expects us to praise an individual’s selflessness instead of asking why a single mother cannot find a job to pay rent, or why college tuition is so high that using her college savings is the only way to stay afloat.

The family has since set up a GoFundMe page that has surpassed its $75,000 goal, and no doubt there will be another feel-good story about that soon but that doesn’t call out any of the issues that led to this situation in the first place.

Thousands of feel-good stories usually involve a GoFundMe page, but the fundraising website is even starting to show its frustration with people having to go to certain lengths to live. On Feb. 11, the official GoFundMe account tweeted: “Millions of Americans are struggling to pay for life’s essentials right now. Every day we see fundraisers for rent, utilities, and even groceries. But GoFundMe was never made to be a source of support for basic needs, and it can never be a replacement for robust federal relief.”

There are certain issues that should be addressed by government programs. People should not have to rely on kindhearted community members to keep their basic human needs. Further, we as journalists need to be better by not glamorizing it anymore. These stories should not make you feel good, and you shouldn’t be smiling after reading them because someone made a crazy sacrifice. They should be making you angry at the systems that caused the issue and sad that people have to go through so many hardships to live.