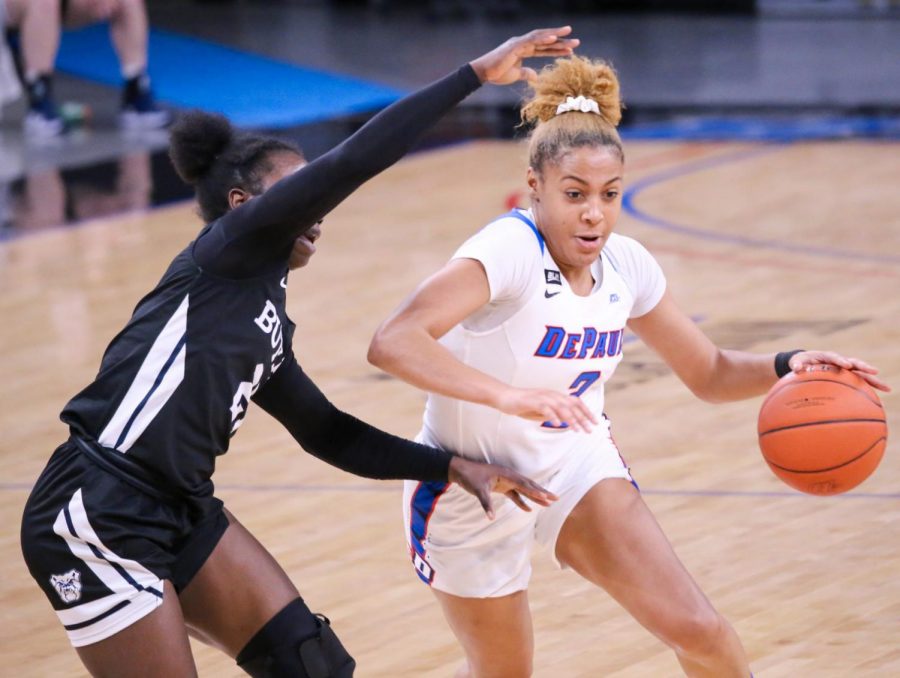 DePaul senior guard Deja Church drives to the rim during a game against Butler on Monday at Wintrust Arena.

DePaul was seeking to finish the regular season on a strong note as they took on the Butler Bulldogs at Wintrust Arena. However, Butler had other ideas as the Bulldogs snapped a 20-game losing streak against DePaul, coming away with an 86-81 win.

The last three games at home for DePaul has been a struggle. The one constant, though, has been poor shooting, especially from three. The Blue Demons shot 10-of-37 for 27 percent from beyond the arc despite attempting 15 more shots from three than Butler.

The field goal percentage was not much better. DePaul shot 34.6 percent from the floor compared to Butler’s 54.1 percent. It’s been a rinse and repeat story for DePaul in their last three losses at home.

“This isn’t very complicated,” said coach Doug Bruno after the game. “When you score 81 points in a college basketball game you should win it. It’s that simple. If you can’t keep a team under 75 then you don’t deserve to win. To me it was very obvious what went wrong here.”

The difference this time around is the Blue Demons were able to hang on late and gave themselves a chance late in the game. But the last couple of sequences in this game were a bit of a microcosm of the last few weeks or so.

pointer of her own.

DePaul was unable to contain Butler’s Upe Otasu and Okako Adika who finished with 22 and 17 points, respectively. All five of their starters ended the game with double digits in points.

The Bulldogs never shot below 50 percent until the fourth quarter and hit big shots not only to get back in the game towards the end of the first half but to nullify any sort of momentum from the Blue Demons in the second.

The performance was more so disappointing considering how well DePaul played in its win over the weekend against Providence. It seemed like they had turned a corner.

DePaul was without Sonya Morris who was suffering from a glute injury. Her absence was noticeable as she is the team’s top scorer. It also cast a limelight on DePaul’s lack of depth, which Bruno mentioned in his press conference.

Bruno called Morris’ injury a “freaky injury” after the game as well as a nagging one. At the time of this writing, Morris’ status ahead of the Big East Tournament is still unclear.

It was a bitter way to end Senior Day for Bekelja, Church, Jolene Daninger and Kiara Dallmann. Church did record her second straight double-double of the season, scoring 20 points and collecting 12 rebounds, which ties a career-high. Bekelja had seven points, five rebounds and six steals.

Junior Lexi Held had 20 points and seven steals, matching a career high and is now number five in the country in steals. Allen had 18 points, a career-high, and six rebounds.

DePaul finishes the regular season with an overall record of 14-7, 11-5 in the Big East and fourth in the standings. They now have a couple of days to try to right the ship before the start of the Big East Tournament.