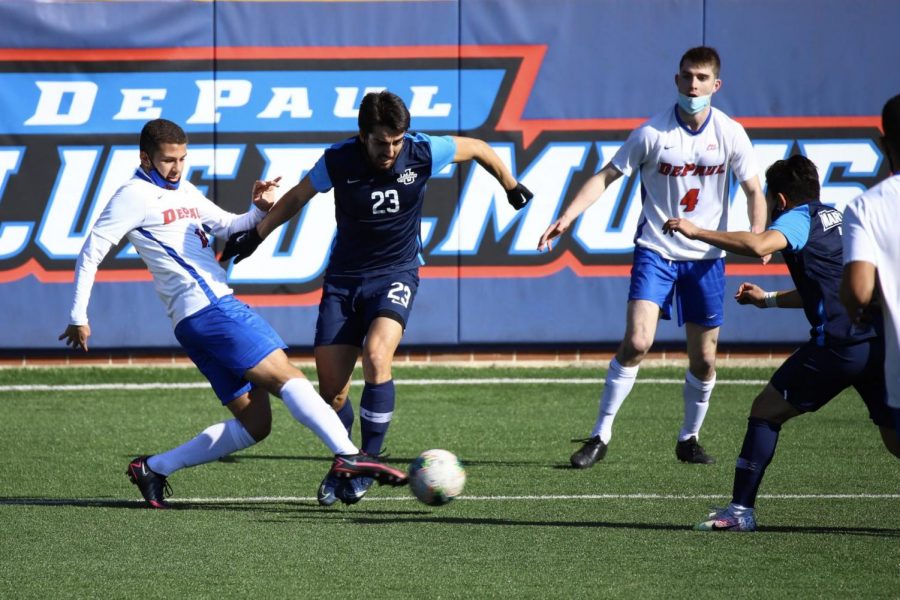 DePaul men's soccer players look to win the ball back from a Marquette player on Saturday at Wish Field.

More than a year later, the Blue Demons played their 2021 home opener against the Golden Eagles. Different year, same venue and a similar result: a 3-1 win for the visiting Marquette Golden Eagles.

The last time DePaul beat Marquette came via the same scoreline, 3-1, on Nov. 1, 2017. But the Golden Eagles have had the Blue Demons’ number since then, outscoring them 6-1 in three consecutive wins.

Marquette controlled most of the play in the opening minutes of the game, and got the much-deserved goal in the ninth minute via junior forward Lucas Sunesson. DePaul struggled early on to gain control of the ball and put together a couple of minutes of good possession.

But the Blue Demons began to get a foothold in the game towards the middle of the first half, and that’s when they grabbed the equalizer. DePaul junior midfielder Matthew Brickman swung in a curling cross that deflected off a Marquette defender and the ball found its way into the back of the net, tying the game at 1-1.

DePaul kept up the pressure in the first half, but they could not find a goal to go up going into the break. The Blue Demons finished the first 45 minutes with nine shots to Marquette’s three.

This matchup usually brings about more fouls and hard tackles, which is what happened in the second half. After only combining for 11 fouls in the first half, Marquette and DePaul combined for 23 fouls in the final 45 minutes.

One of those 11 fouls from DePaul proved to be costly, as it led to a Marquette goal in the 70th minute. Golden Eagle forward Beto Soto was able to put the free-kick past DePaul goalie Drew Nulle to secure the win for his team.

Sunesson would grab his second goal of the game in the 84th minute, giving his team a two-goal cushion heading into the final five minutes of the game.

The Blue Demons are now 0-2-2 this season, conceding 10 goals and only scoring three. DePaul will continue Big East play when they travel to face Xavier on Wednesday.