OPINION: America was woefully unprepared for the pandemic 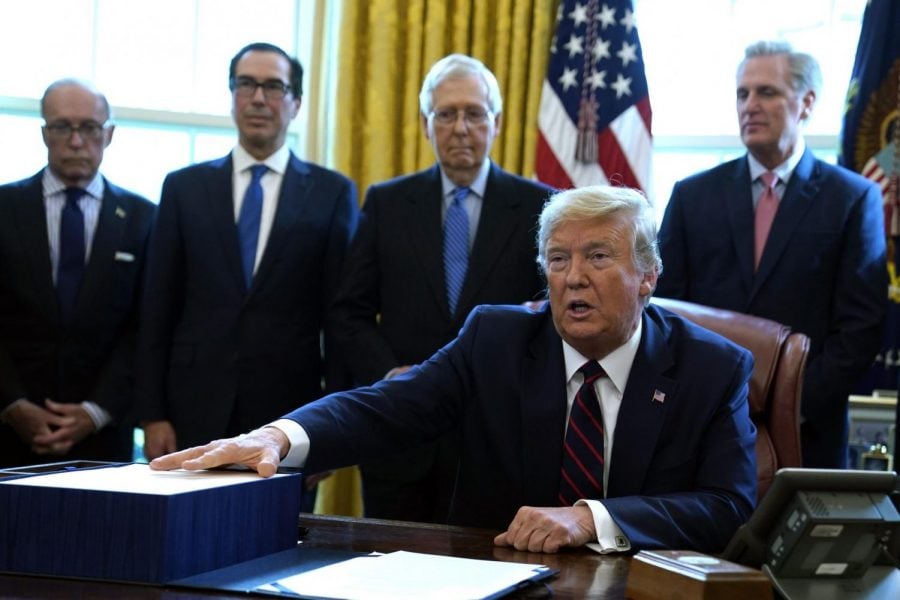 The pride embedded in American culture has made it significantly easier for the collective to ignore the underlying issues plaguing its society. The Covid-19 pandemic, which has persisted and ravaged the world for the past year, has exposed those issues. America’s growing hyperpartisanship, corrupt political class and underlying health inequities have been brought to the forefront and a crisis that should have been universal for the American people has exacerbated the growing divide between the many factions of the public.

“The Newsroom,” created by Aaron Sorkin in 2012, follows a group of journalists in a fictional cable news network in New York City. The first scene opens with a group of panelists at a university event. The show’s lead, Will McAvoy (Jeff Daniels), attempts to persist with his amiable persona, refusing to engage in any disagreement with the other panelists.

Then, a university student asks the question, “What makes America the greatest country in the world?”

McAvoy continues with his avoidant answers, originally giving the response, “The New York Jets.” The moderator pushes him until he breaks and, for the first time, states his actual opinion.

“It’s not the greatest country in the world, professor. That’s my answer,” McAvoy says.

McAvoy was right. The tenets of American pride, as the fictional panelists listed in the show, are freedom and equality. Instead of being ideologies to aspire to, these terms have often been utilized to belittle opposition from differing political affiliations. The idea that America is the “greatest country in the world” is simply not true, and that could not be more clear when you look at the effects the Covid-19 pandemic has had on the American public.

Stephen Farnsworth, professor and director of the Center for Leadership and Media Studies at Georgetown University, said that what makes the Covid-19 crisis even worse is that it did not have to be this way.

“If President Trump had not dismissed the public health threat of Covid, and had he not encouraged reckless individual behavior, fewer Americans would have died and fewer would have been sick by Covid,” Farnsworth said.

The necessary safety precautions, as determined by the Center for Disease Control and Prevention (CDC), became politicized as President Donald Trump made the enforcement of social distancing measures a partisan issue.

At the first 2020 presidential debate, Trump openly mocked Biden for wearing a mask.

“I don’t wear masks like him,” Trump said of Biden at the debate. “Every time you see him, he’s got a mask. He could be speaking 200 feet away and he shows up with the biggest mask I’ve ever seen.”

Wearing a mask was only one precaution determined to slow the spread of coronavirus. Trump spent most of the past year mocking Anthony Fauci, the nation’s leading infectious disease expert. Trump’s belittling of public health experts such as Fauci led to an increasing coalition, mainly consisting of Trump supporters, that has refused to abide by the guidelines put forth by the CDC to enforce individual responsibility for the prevention of Covid-19.

“Trump’s dismissal of scientific advice encouraged his followers to ignore the best practices for minimizing the impact of this virus,” Farnsworth added. “A generation of Republican attacks on experts primed Trump’s supporters for this message, and the consequences have been terrible indeed.”

Craig Klugman, a professor of health sciences at DePaul, said that health inequities are often revealed in a pandemic.

“And I think, you know, we have definitely seen that here from who is more susceptible to the disease, to who can work from home, to who’s dying more from it, who’s getting care to who’s getting the vaccine,” Klugman said. “You know, that is definitely being displayed, the health inequities we have in our society.”

Robert Kallen, a professor of economics at DePaul, says that because of the pandemic, the economy still is not ready to stand on its own.

“Each time a pandemic goes to pass, it’s adjusting both present and future of what information that government leaders have is the right prescription of moving forward,” Kallen said. “So, right now, there’s no doubt that we are not out of the pandemic.”

The latest stimulus package, which was signed into law on Thursday, aims to provide the necessary government aid to reinvigorate the economy. The measure includes $1,400 stimulus checks, the extension of unemployment benefits and money to reopen businesses and schools.

In light of the new law, a faster pace of vaccinations and death rates down, Biden announced in a primetime address that he hopes for Americans to return to a semblance of normal by July 4.

America’s problems preceded the pandemic. The erosion of truth, a heartless economy that benefits a privileged class and a combative discourse that divides the American public became even more prevalent in the past year. A year later, cases of Covid-19 are down, vaccines are becoming more widely available and stimulus checks will soon be available to all Americans. Things are getting better, but those underlying conditions are still there.

After his statement in “The Newsroom”, McAvoy continues on his rant that America is no longer the “greatest country in the world.” He does end, however, on a more hopeful note.

“The first step in solving any problem is recognizing there is one,” he added. “America is not the greatest country in the world anymore. Enough?”