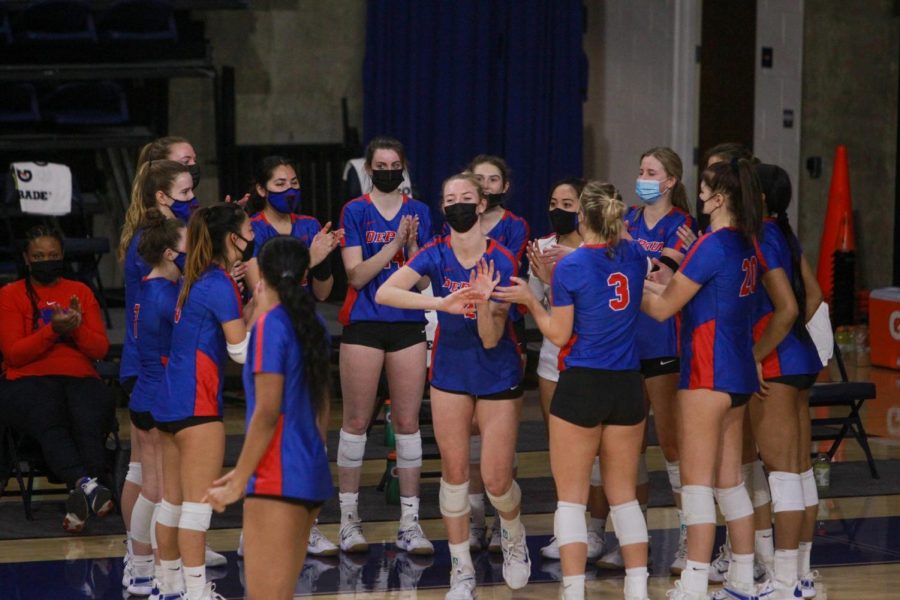 The match, which was not originally scheduled, was DePaul’s first non-conference game of the season. Following two tough losses at No. 23 Creighton in their final Big East series, the Blue Demons regrouped to get a solid win over a stingy Northern Iowa Panthers squad.

The first set lasted the longest of any of DePaul’s sets throughout the entire season and took forty minutes to conclude as the Blue Demons needed to go well into extra time in order build an early lead.

The second set was much of the same except for the result. Northern Iowa won 26-24 in extra time, but both teams were neck-and-neck the entire set. The third set, DePaul built separation near the end and won 25-20.

In the final set, DePaul got out to a fast start, building an 8-3 lead but the gap rapidly closed when Northern Iowa rattled off a 7-1 run. Self-inflicted errors and DePaul’s front line helped DePaul recover and eventually take the final set, 25-19.

DePaul had three big scorers on the day. Freshman Jill Pressley led the Blue Demons with 18 kills while veterans Emma Price and Donna Brown helped round out a potent frontline attack with 12 and 9 kills, respectively.

Scoring wasn’t the only factor in the victory, though. Phoenix Lee and Molly Murrihy each led DePaul with 22 assists while Pressley added 18 digs to help the Blue Demons have the advantage in ball control.

Northern Iowa junior Inga Rotto led the Panthers in kills with 12 while freshman setter Tayler Alden had, substantially, the most assists out of anyone on either team with 38 assists, in a losing effort.

Most statistical categories were even between both teams, which was reflected by the consistently tight scoring differentials. However, service errors were huge momentum squandering hits to Northern Iowa’s chances for success.

DePaul only had 6 service errors while Northern Iowa had an unprecedented 14. Many times, errant serves would follow large scoring streaks by Northern Iowa which would allow for DePaul to regroup and never get too far behind which was especially important between these two evenly matched teams.

Although Northern Iowa lost the match, since the last time DePaul played them in 1990, their coach Bobbi Petersen became the winningest coach in Missouri Valley Conference history with 15 NCAA Tournament appearances.

If DePaul head coach Marie Zidek is to build similar rapport in her future, winning difficult games on the road is a starting point and that’s exactly what DePaul achieved for the first time all season at Northern Iowa.

The win comes as DePaul returns home where they will face another originally unscheduled opponent to wrap this abrupt spring volleyball season as well as prepare those who are returning for a quick return to action in fall of 2021.