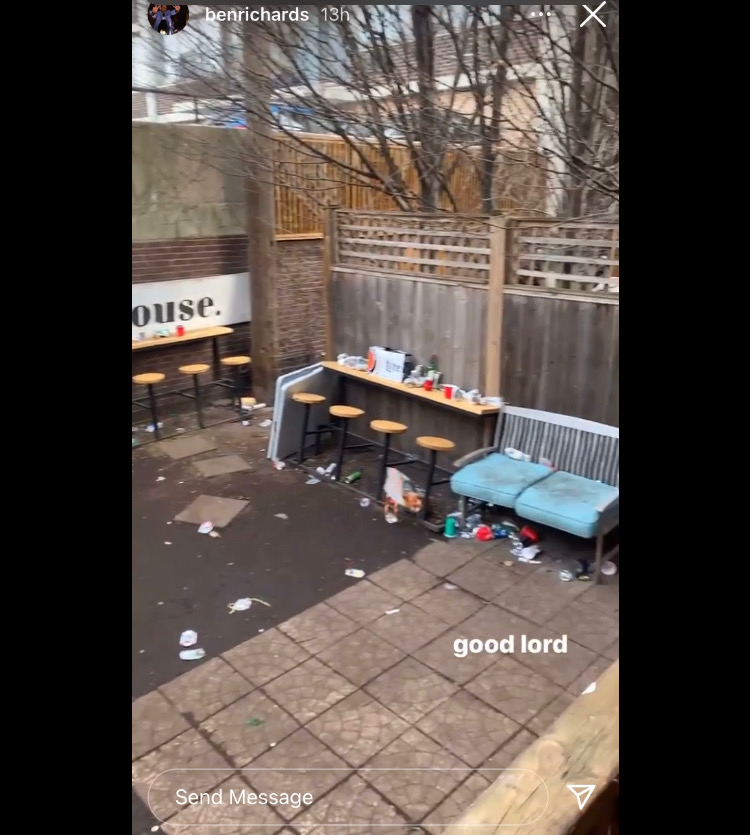 Screenshots from the aftermath of the St. Patrick's Day Party.

Correction (3/18/2021): Barrett Desotell was incorrectly named as a current DePaul student and the host of the St. Patrick’s Day party that occurred on March 13 and written about in The DePaulia on March 17.  While our reporter confirmed with several sources that he was the host of the party, it has become apparent that sources gave our reporter inaccurate information.

Desotell provided time-stamped video evidence to The DePaulia that he was not in any way involved with the party and was out of state when it occurred. In light of this information, we have removed several paragraphs of the story. The DePaulia regrets the error.

Editor’s note: The DePaulia has chosen to substitute the language “Greek life” with “Fraternity & Sorority Life” henceforth after a reader indicated the former language is outdated and may make individuals of Greek descent uncomfortable.

The DePaul Panhellenic Council held an emergency general body meeting on March 17 regarding its action plan in response to those who attended the party. The council barred reporters from entering the meeting — which is its right — so The DePaulia did not attend.

However, 14 East Magazine provided live coverage of the event by gaining access through a third party.

“The Interfraternity Council is dedicated to the health and wellbeing of our member fraternities, and do not [sic] condone any gatherings that break COVID-19 protocol as set by the CDC, Illinois Department of Health, the City of Chicago, and DePaul,” the statement reads.

“Due to our current ability to adjudicate cases that break COVID-19 guidelines, the Dean of Students Office will be handling the investigation of any fraternity that is alleged to have held a party on St. Patrick’s Day weekend,” the statement continued.

“As a recent graduate from Johns Hopkins School of Public Health, I have gone to great lengths with the chapter [to] ensure that the members of the chapter are educated in and following good public health practices,” Tassone told The DePaulia.

“Up until this past weekend, the chapter has engaged in exceptional public health practices. We were incredibly disappointed to learn that the standards we had set in place were violated by members in our chapter,” he added. “[The Dean of Students] has reached out to some members this week to talk. SAE’s Judicial and Executive Board had already met prior to the original article’s publication and had decided on sanctions for the involved parties.”

According to the City of Chicago Capacity Guidelines issued on March 2, “Indoor gatherings within private residences cannot exceed 10 individuals. Limit capacity in common areas and amenity spaces to 50% or no more than 50 individuals for indoor spaces or activities, while ensuring social distancing.”

Although the exact number of party goers is unknown, the photos and videos submitted show a large number of individuals in attendance.

“It is more important than ever to follow guidance from local, state, and federal officials on how to stop the spread of the virus…all of which include strict adherence to physical distancing, masking, health screening and sanitation protocols,” Chicago guidelines say.