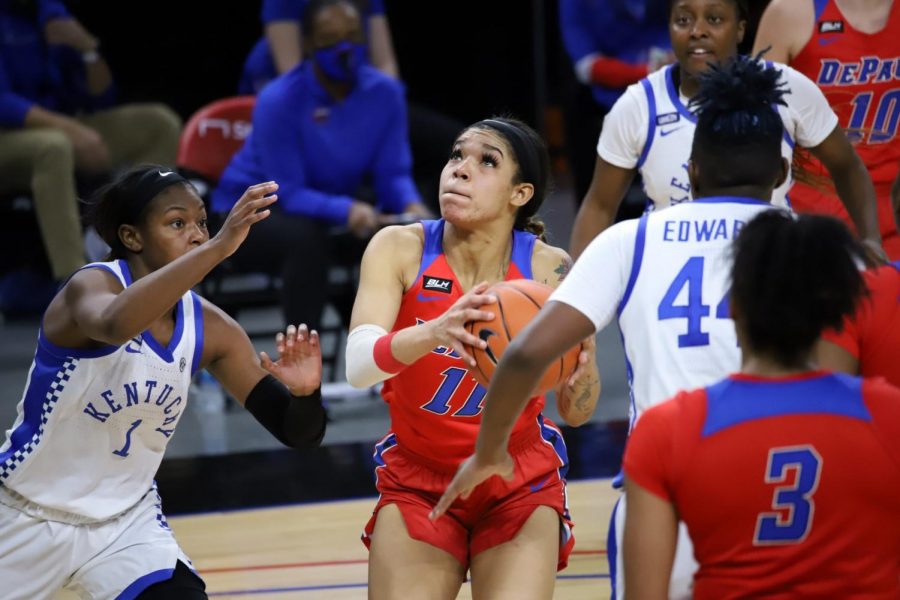 DePaul junior guard Sonya Morris goes up for a layup against Kentucky on Wednesday.

DePaul’s season ended on a whimper as they lost 100-91 to the Drake Bulldogs in the consolation bracket side of the Women’s National Invitation Tournament.

The Blue Demons were looking to make amends following a 74-72 loss to Saint Louis the day before. Unfortunately for coach Doug Bruno and his team, they were never given the opportunity.

DePaul was simply unable to stop the Drake offense who scored early and often. The Bulldogs got out to an early lead and one that they would never give up. By the time the first quarter ended, DePaul found themselves down 30-21. It didn’t help that DePaul went scoreless for a span of 3:11 in the quarter.

The second quarter was a little better from DePaul where they actually had a better shooting percentage, 73.3 to 58.8, than Drake. At times, it looked like the Blue Demons were getting back into the game.

But some huge shots from beyond the arc from Drake completely let the air out of a DePaul comeback. The Bulldogs shot an impressive 70 percent from the 3-point line — sophomore guard Sarah Beth Guelder knocked down three 3-pointers alone.

Both offenses shot well in the second quarter. The Blue Demons shto 73.3 percent from the floor, 50 percent from three. But the defense simply could not deliver on a stop when it seemed like they were getting back into the game.

In terms of points, the third quarter was the best one for DePaul as they managed to outscore Drake. But with just a two-point difference, it wasn’t anywhere near enough to put a dent in the lead. In fact, it was in the third quarter where Drake got their biggest lead of the game at 77-64.

DePaul outscored the Bulldogs in the fourth quarter, 24-23, but a back-and-forth quarter is not what the Blue Demons needed if they wanted any hope of a comeback and in the end fell by the 100-91 final.

DePaul’s inability to defend proved to be too much against what was a good offensive performance. Junior guard Kierra Collier led Drake with 21 points. But Drake had contributions from a number of players. Drake had 53 points off the bench to DePaul’s five and outrebounded DePaul 50 to 27.

In his postgame press conferences after some of the more recent losses, he stressed by giving his team the green light to take a shot, he expected them to get back on defense just as quickly. That simply wasn’t the case down the stretch.

While the final scoreline only showed a nine-point difference, Drake was comfortable throughout. The Bulldogs never trailed at any point during the game.

The loss brings a disappointing end to what started as a promising season. From losing four out of the last five games to being bounced out of the Big East Tournament to losing two straight in the WNIT, it certainly wasn’t the end that anyone on the DePaul team had envisioned.