Chicago Black Drag Council born out of the ashes of 2020 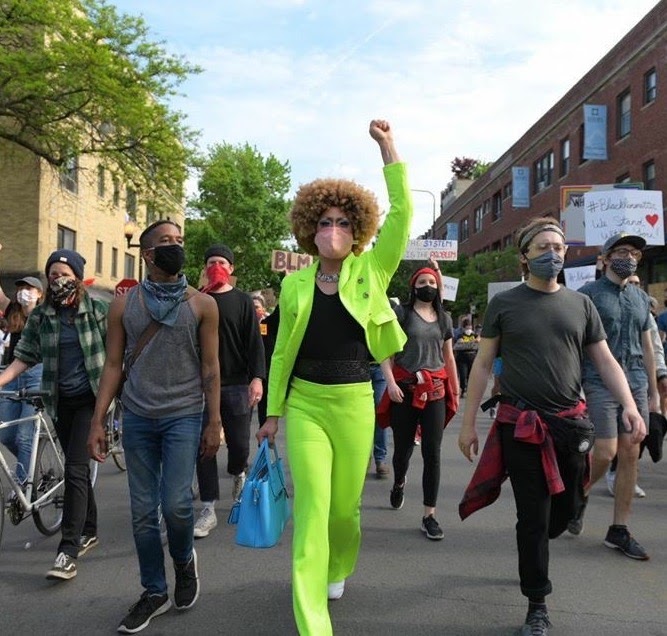 2020 was a year full of hardships ranging from a global pandemic to increased racial tension, causing some to call for change. Chicago’s Black drag community saw this need for change and formed the Chicago Black Drag Council (CBDC) last June, creating new resources and fostering an inclusive environment for drag queens of color.

“We formed…when the Black Lives Matter movement started picking up steam again this June,”  said Joe Lewis, co-founder of CBDC. “Things were getting very intense and very pressured and everyone [started] taking steps, taking actions to get things done.”

The Chicago Drag March for Change, a protest last June that focused on racial injustice issues, brought the community together to recognize the need for an organization such as CBDC. For Lewis, this march and similar events helped galvanize the community to work together, which he believes provided CBDC the chance to “clean the LGBTQ+ community first, [setting] an example for others to take note of and follow.”

The mission of the CBDC is to bring the community together and hold it to a standard with restorative justice in mind. Lewis said that the LGBTQ+ community has lacked a central sense of community for a few years, as once a sense of community came about, the AIDS crisis hit, taking out a generation of LGBTQ+ people. By 1995, one in nine gay men had been diagnosed with AIDS.

“That did lead to us forming another sense of community,” Lewis said. “The timeline goes: Stonewall riots, we start naming ourselves, forming a community; AIDS crisis. We then double down and find our own avenues of mutual aid and healthcare, and then now we are joining up again during this movement to form an even deeper community, clean up our own community and provide accountability for ourselves and others outside the community [leading] to pathways for restorative justice.”

CBDC co-founder Tatyana Chante said that while Chicago is one of the more open communities — with a wide variety of people representing all genders, sizes and races — when you have such a large group, it can lead to moments of transphobia, racism and other forms of discrimination.

“Black people basically invented drag…the people that started it were Black, trans women — they were the ones that paved the way,” Chante said. “As like a lot of things in American society, they get whitewashed and they get colonized by white people and taken over as their own. And specifically, with like cis, gay white men have taken over through ‘RuPaul’s Drag Race’ and through other avenues and leaving out Black people and Black trans people along the way.”

With their similar goals, CBDC and Brave Space Alliance (BSA) teamed up to organize a makeup drive which ultimately led to the creation of BSA’s makeup room where Black and Brown people identifying as LGBTQ+ and sex workers can obtain free makeup.

“I’m sure a lot of drag queens bought makeup they thought they were going to use and then quarantine hit and they now just have it sitting there,” Chante said.

Wigs, makeup and other accessories can be found in the makeup room with BSA having hopes of getting more gender-affirming products such as tucking underwear in the future. According to Lewis, the drive took place Sept. 14-20, and received over $60,000 in donations, including celebrity donations from Kim Chi, a Korean-American drag queen who appeared in “RuPaul’s Drag Race.”

CBDC’s community outreach initiatives don’t stop there. They also organized a food drive that collected over 100 pounds of food and a Valentine’s Day volunteer event that delivered over 200 valentines to residents at Town Hall Apartments, with collaborations from local bars and nonprofit Our Art of Giving. Alongside these initiatives, CBDC has created its own mutual aid fund providing grants to Black and Brown nightlife workers.

Beyond the community outreach and benefit events, the CBDC put on the Black Valentine Cabaret that created a virtual outlet for Black drag performers.

“When we did the Black Valentine Cabaret, it was about 80 — almost 100 — performers and we got money in their pockets, provided an avenue for expression and a place for the community to come and be seen and to even provide some insight into some performers that people may not have known about to kind of equal the playing field as we start to open up again,” Lewis said. “So, not only are we dealing with Covid now and providing a creative release, but we’re creating a pathway for the future as well.”

The CBDC has been around Chicago for approximately eight months with hopes of being a staple in the Chicago LGBTQ+ community, making it a welcoming place for people of all backgrounds. The CBDC publishes a newsletter called “The Scene” run by Anya Justanya that can be found on their website.