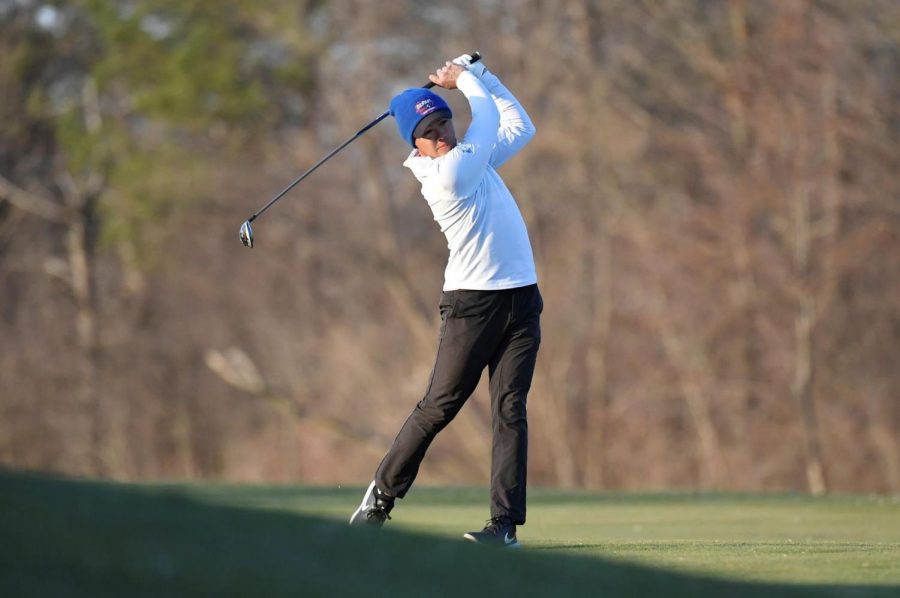 Nik Gatmaytan hits a shot from the fairway during the 2021 season.

DePaul’s golf team finished second in the John Dallio Match Play on Friday. The Blue Demons defeated Bradley in the morning session before losing to Loyola Chicago in the championship series.

DePaul defeated Bradley by a score of 4-2 as golfers Conor Glennon, Noah Kolar, Artemiy Yalovenko and Nik Gatmaytan all posted victories. The Ramblers, on the other hand, took care of Chicago State 4.5-1.5 in their morning session match.

But in the championship series, the Blue Demons fell short in a couple of close matches, losing 3-1 overall to Loyola and handing the winning trophy to their rival.

DePaul is accustomed to hosting the John Dallio event at its home course — the Ruffled Feathers GC. The event is in the memory of former DePaul golfer John Dallio, who passed away with glioblastoma, a deadly brain tumor, in 2003.

The Blue Demons have hosted this event 13 times since 2004, winning three of them, including two straight from 2015-16.

DePaul won its first title of the season at the Alabama A&M Golf Classic on March 23. As part of a six-team event, the Blue Demons finished 13 strokes better than Alabama State and Arkansas-Pine Bluff.

Four DePaul players finished inside the top 10, with Glennon leading the charge with a second-place finish. He carded a 70 (-2) in the third round to finish at 217 (+1).

Kolar placed fifth after he posted a 69 (-3) in the third round for a 54-hole total of 220 (+4). Perry Chong and Yalovenko rounded out DePaul’s group in the top 10 as Chong notched his first career top-10 finish with a tie for seventh place and Yalovenko finished in a group in 10th place.

DePaul still has two more tournaments — the Dayton Flyer Intercollegiate (April 12-13) and the Hawkeye Invitational (April 17-18) — before the Big East championship, which runs from April 26-28 in Bowling Green, Florida.