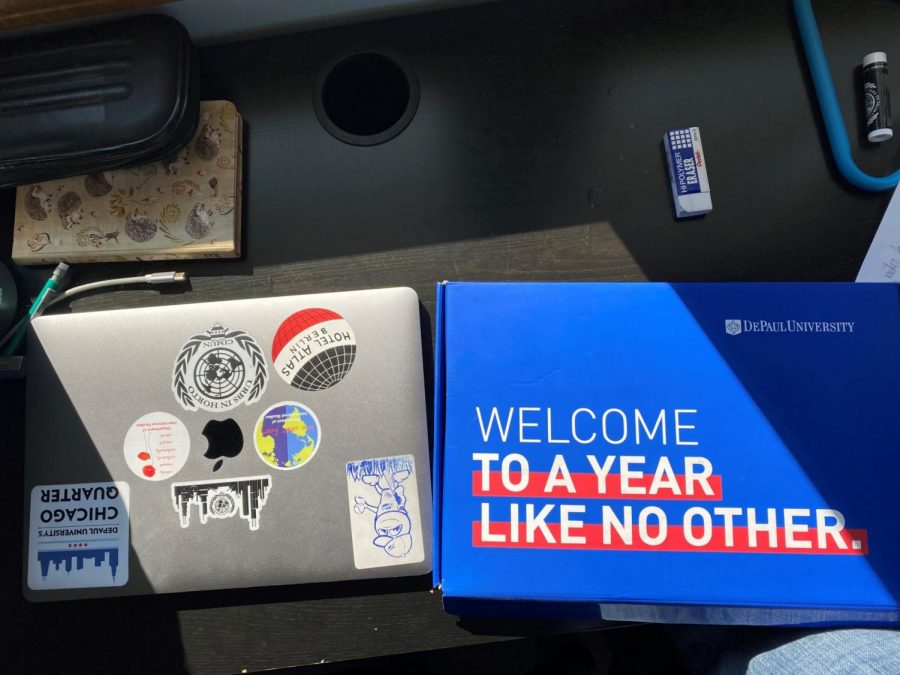 The box that included two free DePaul face coverings and a safety pledge was just a little bigger than Janicki's laptop.

Like many students, I was excited in the fall to receive my two DePaul masks, courtesy of DePaul’s Division of Enrollment Management, and while I felt a momentary rush of excitement, it quickly faded. I realized soon after that this would not improve my academic experience, nor would it change the financial burden of college that the pandemic had only exacerbated. While this may seem small, this is precisely where DePaul’s enrollment strategy has failed to engage with students and keep them at the university.

Instead of investing in its existing programs, encouraging and incentivizing growth in the faculty and addressing the needs of a student body whose background continues to diversify, DePaul frequently chooses to try to “wow” students, but this sugar rush hardly even lasts a year for a large number of DePaul freshmen.

This is hardly a problem for incoming students, at least on the surface. Freshmen enrollment continues to reach new peaks year after year, with an almost 5 percent increase this past fall, even with the Covid-19 pandemic in full swing. Where this becomes a problem is in retaining these students — something at which DePaul has proven to be ineffective. DePaul has bled students left and right at a rate exceeding the increase in enrollment. Certainly, the question arises: Why is this happening?

The answer is rather vexing: DePaul has, from academic, student life and the larger DePaul experience, not chosen to invest in honing what it does well: providing a superb urban education that lives up to our Vincentian origin. And while it seems like things continue to grow and expand, what we are really seeing is the erection of mere scaffolding supported by existing foundations that sorely need investment.

Take for example the relatively new Grace School of Applied Diplomacy within the College of Liberal Arts and Social Sciences, which for the 2019-2020 year was a hallmark attractor, having been the major talking point at the university’s first ever Blue Demon Welcome.

In his remarks announcing the creation of the school, President A. Gabriel Esteban noted that “[he and former Provost Martin denBoer] discovered that no other university in Chicago or the Midwest has a program in applied diplomacy.”

He would further confirm that there was a real need for the Grace School, and thus, through an anonymous benefactor, it was born. It was created specifically to attract new students, meeting a previously unmet need.

Yet below the surface of the $20 million dollar donation lies a program that enervates departments which struggle to retain additional funds for faculty and programming, per faculty I’ve heard from, whose names will remain anonymous. Over half of the credits in the applied diplomacy core and nearly all of the concentration classes are simply classes from the international studies, political science and geography departments. So, is this whopping sum going towards investing in additional faculty and existing departments, or in marketing this school to draw in new students? To me it seems to be the latter.

The impact of this decision also extends to the lives of professors. A number of the faculty in the aforementioned departments are now being asked to teach classes under this new school, on top of those already offered to their home departments. This is unacceptable, and it is no surprise that DePaul continues to cut efforts by faculty to organize and collectively bargain with the administration at the knees.

But the Grace School of Applied Diplomacy is only one example of the larger philosophy guiding DePaul’s enrollment decisions. It is interested in short-term gains which ignore the importance of a university: the education and experience of the student. Moreover, it is interested in perpetuating itself and seeking to attract these larger and larger classes, with only higher and higher rates of students that transfer out shortly thereafter.

And obviously, this increase of enrollment wasn’t just the magical work of recently appointed Vice President of Enrollment Management, Soumitra Ghosh. Rather, it came through the work of the 224 staff members in Enrollment Management, not counting any student workers who play an integral role in the process. This number continues to grow, including new counselors servicing target geographical regions such as Texas and California.

Unfortunately, the university seems unlikely to change course. Despite framing retention rates as a pressing issue of the university at a recent Leadership Town Hall, the administration declined to offer any solution besides maintaining the status quo. What, then, is the solution?

The solution seems rather obvious to me — a fundamental change in philosophy that seeks to invest in the fundamental needs of students, instead of chasing short-term possibilities. But this change in philosophy is unimaginable by the leadership of the university which continues to be held by corporate entrepreneurs and leaders who built their careers in sectors whose primary focus is profit rather than people.

Yet, what they often overlook is that higher education’s central mission is education at the highest quality, not upon inordinately raising customer or student expectations, only to have them realize the education and experience they were sold is nothing like what they received.