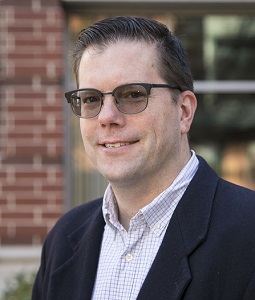 Through love, acceptance and service, he touches the lives of those in need through intentional community. Embodying St. Vincent de Paul, he lives his life through compassion and purpose.

Beaming from ear to ear, a man who just celebrated his 50th birthday but with no gray hairs in sight sits in his home office, light shining in the window behind him. A booming laugh fills the Zoom call as he exclaims how excited he is to do an interview all about him.

Karl Nass, a Mission and Ministries professor shared his story of how he became a beloved professor and mentor to many at DePaul and beyond with The DePaulia.

“Like the glimpses into the world and into your hearts that I get to experience with you,” Nass said. “It’s beautiful, it’s amazing, it’s powerful. That’s what shapes me and continues to give me a sense of purpose and wisdom to be the dad and the husband and the educator.”

Nass started his journey in Santiago, Chile at a post-grad volunteer program with the Holy Cross Brothers and Priests. He worked in an orphanage, taught in school and fell in love with service. His passion for helping others formed into the idea of a career in priesthood.

He also found the love of his life at a similar volunteer program.

“I met Maggie at that time but also wrestling with something within that was calling me to think about priesthood and becoming a Catholic priest,” Nass said. “She said go and take your time that you need to see where your calling [in] life was, so I moved to Chicago.”

Nass was a candidate with the Jesuits for a year and was placed at Cristo Rey Jesuit High School in Pilsen on the Southwest Side. A DCSA group at DePaul would volunteer every week and it was there he found clarity of who wanted to become.

“It’s the beauty of becoming a priest, getting married and having a family, and I felt drawn,” Nass said. “I felt God calling me to be a dad and to be a husband.”

Nass said he never gets tired of DePaul because of the inspiration he receives from everyone around him.

“I’ve been inspired and I continue to be inspired in life so that’s what I try to pay attention to,” Nass said. “There’s something beautiful that was revealed in your life, that mystery that was revealed that is calling you to your next step and like that makes my heart sing, that’s what DePaul college and this time of life is about.”

Joyana Novak, another Mission and Ministries professor at DePaul, said she felt a connection to Nass right away and felt he was always doing his best to be there for everyone.

“I remember very soon after Teddy (Novak’s son)  was born he came to visit us at the hospital,” Novak said. “And he brought this DePaul teddy bear and just to be with us in a moment of crisis and difficulty to get also the joy of this new life that was born. I think compassion in that moment and that willingness to come to me is a deep sense of comfort and gratitude for being a part of his circle and his community.”

Novak said she has seen first hand how Nass lives the Vincentian Mission to connect with others and be vulnerable and real. Novak mentioned Nass’s adopted children as an example, as well as his willingness to open his home to those in need.

“It’s how he lives his life and puts into practice our vincentian mission in really powerful ways,” Novak said. “It’s everything in his life, and when you hear him talking about it he takes that to the utmost degree of opening his home, and committing to his family. He and his wife chose to adopt two children from Ethiopia, and their own journey of adopting children from Ethiopia, and then learning about and engaging in that rich culture. This is another way that he shows how our global family is part of who we are and how we’re all interconnected.”

Hope Rozeveled, a Peace, Justice and Conflict major at DePaul, is connected to Nass through the senior team DePaul Community Service Association for the wider Vincentians in Action group. Rozeveled describes how she sees Nass at DePaul and his interactions with everyone.

“I think that Karl represents how radically welcoming Mission and Ministry aims to be,” Rozeveled said. “When he asks you how you’re doing, he really and truly means it, which perhaps seems small, but it is something that can make such a difference in your day.”

When asked how Nass has impacted her life, Rozeveled said she believes Nass helped her grow as the person she wants to be.

“It’s hard to put into words just how much Karl has impacted my life,” Rozeveled said. “He reminds me of who I want to be as a person, and how we can create a better world just by our own individual actions. Mission and Ministry is amazing because of the people in it, and Karl is undoubtedly part of that.”

Gisselle Cervantes, an international studies major at DePaul, is connected to Nass through the DeLs scholar and DCSA coordinator.

“I have actually known Karl since he interviewed me for the DePaul Leadership Scholarship,” Cervantes said. “When I got the scholarship and came to DePaul, Karl was my professor for my Discover Chicago course. Since then, I’ve also had the honor of being the CQM for his course.”

Cervantes said Nass has helped her through the struggles of Covid-19 and created a new outlook on how to support others the way Nass helped her.

“During this pandemic, Karl has helped me feel connected to DePaul and to the Vincentian mission in a time where I really needed community,” Cervantes said. “Karl is a mentor to me because I feel valued and respected by him, and I want to extend that same energy to others. Karl is always accessible to listen and support me through the difficult moments, and I will always be grateful for the ways in which he has supported me.”

When asked what advice he would give to his students, Nass said he believes the importance of reflection and love for yourself and others should guide your life.

“In life we try to be faithful to our purpose, what we’re being invited to try and be responsible and faithful to our realities that’s with us and be aware of what’s blocking our freedom,” Nass said. “What’s keeping us in the shadows and try to pay attention to that. To move in line with that which gives us a sense of life and purpose and energy.”

Correction (4/7/2021): This story has been corrected to reflect that Karl Nass began his work in Santiago, Chile.