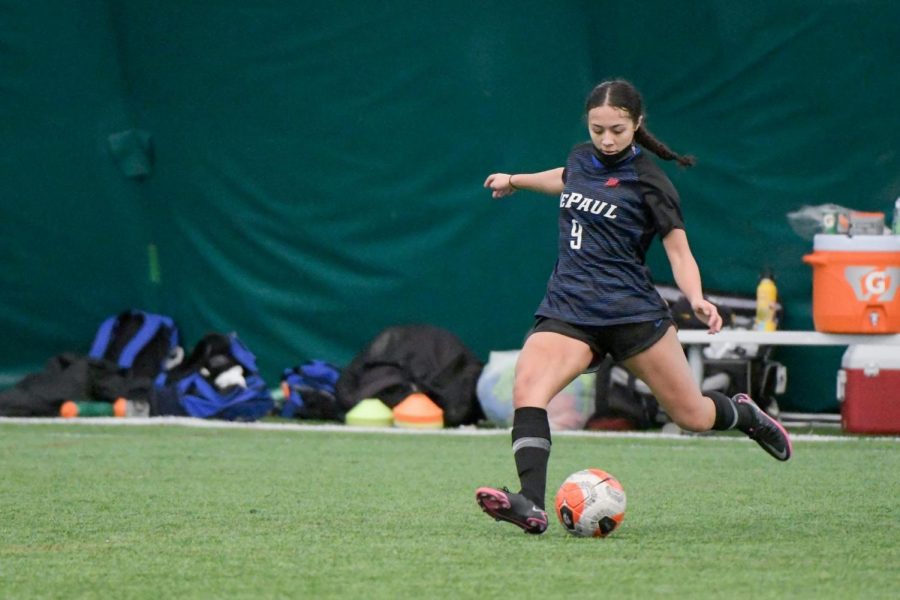 DePaul freshman defender Bella Hanisch looks to pass the ball in a game against Valparaiso on Feb. 22.

Senior midfielder Bina Saipi opened the scoring four minutes into the match, but the Blue Demons failed to build on that lead. Saipi has goals in back-to-back games after scoring to force overtime against Xavier at Wish Field on March 28.

DePaul would only muster up two more shots in the first half, while Creighton would put eight shots on goal. Even with all the pressure that the Bluejays were mounting on DePaul, junior goalie Mollie Eriksson stopped every shot to keep the Blue Demons in front.

The Blue Demons again struggled for chance creation in the second half, only getting three shots off to Creighton’s 12. Creighton had a header go off the post with 35 minutes remaining in the game.

Eventually, the Bluejays scored the winning goal in the 68th minute courtesy of Lea Hoiness. Creighton was able to hold onto the 2-1 lead in the final 20 minutes.

DePaul and Creighton split the season series after the Blue Demons won the first game, 2-1, in overtime at Wish Field March 14.

The Blue Demons sit in last place in the Midwest standings and have one more remaining against Xavier on April 11.