How NFTs are changing lives 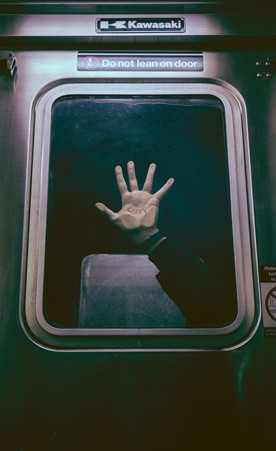 Tendencies” by Joey Miller, sold on Rarible for 2.5ETH.

In 1959, French artist Yves Klein sold the world’s first NFT, or non-fungible token. Well, not really, but the central idea was there. Klein was an early advocate of immaterial art. He believed a piece of artwork could be sold purely as an experience, eliminating the notion that art has to be something physical in order to be considered art.

Digital art is a vague descendent of the immaterial. It’s not like a painting or sculpture that you can physically observe in the real world. It exists in an intangible space called the internet.

Once shared online, a digital creation stands defenseless against digital vultures — people who steal, copy or profit off work that is not their own. For digital art, this has obliterated the idea of scarcity, making it nearly impossible to sell on the traditional art market. Until recently.

“The NFT is, in many ways, a way to sort of sharply pull back on the openness of the internet,” said Jeff Carter, professor of art, media and design at DePaul University.

Chances are by now you either know or have heard the term NFT or non-fungible token It attributes ownership of unique, one-of-a-kind digital files to one single person. Art, photos, music, videos, memes, GIFS — you name it. If it can exist as a digital file, it can be sold as an NFT.

“The idea that a person could hypothetically own the original of a piece of digital art is really exciting and fascinating,” said DePaul photography professor JaNae Contag.

For decades, digital art has had to prove itself as a medium worthy of acceptance and value in the traditional art market. Unfortunately, it hadn’t been very successful. The market struggled with the technicalities of digital art, its immateriality and abundance.

Digital art was a slow-moving market and NFTs are an attempt to fix that.

“The value of art is constantly in flux,” Contag said. “Now we have this other way of assigning value to a piece of art.”

Nine months ago, Joey Miller, a multimedia photographer based in Chicago, was on the brink of losing his apartment. He worried about the implications this change would have on his mental health and relationships. “That’s when my first NFT got bought,” he said. “It changed my life for the better.”

Miller is now the fourth highest-selling photographer in the NFT community. Recently, he was the first to receive the highest NFT photography sale on Rarible, a digital marketplace and platform built on the Ethereum blockchain, the official cryptocurrency for NFTs. He sold it for 2.5 ETH — around $4000.

“NFTs are a way to put more of the power back into the hands of the maker,” said DePaul photography professor Jordan Schulman.

Though NFTs have provided more opportunities for digital artists, there’s still a lot of unanswered questions surrounding this booming business.

For some, the cause of concern comes from the legality of NFTs.

“It’s very easy to be judgmental and cynical of something like this,” Schulman said. “There’s going to have to be new legislation and law written around stuff like this.”

For others, the cause of concern is environmental impact. According to TIME magazine, in a single year, Ethereum mining generates about 26.5 terawatt-hours of electricity, almost as much as the entire country of Ireland.

“I get worried that the environmental costs of this technology and the production of blockchain could potentially get overlooked,” Contag said.

For artists like Miller who are using NFTs as a primary source of income, carbon offset donations have become increasingly necessary. “We’re basically just trying to stay carbon neutral or carbon positive,” he said. “I’m very excited for ETH 2.0.”

Ethereum 2.0 is an upgrade to the already existing Ethereum blockchain. Its aim is to increase scalability, security and sustainability.

Miller believes that this generation of artists will play key roles in changing the functionality of blockchain. “The amount of pressure that’s on blockchain is immense,” he said. “Them ignoring it will lead to backlash from the very people that are making their living.”

The NFT community is still very much in the process of finding its legs.

“Whoever gets in at the early stages is going to have a lot of influence over how this develops,” Carter said.

For Miller, NFTs do more than play a large role in shaping the future of art. Right here, right now, they are giving young, new artists a fighting chance. A chance the traditional art world didn’t give them.

Usman Chaudhry, musician, producer and student at DePaul University, is looking into getting into the NFT space.

“This is another way for us to really monetize off art without having to do the traditional push,” he said.

Sixty years ago, Yves Klein rented and cleared out a gallery space. It was an empty room with nothing other than a bare display case. He called it “The Void” and sold eight of these over his lifetime. In return, the collector who purchased empty space was given a receipt — a “token,” if you will.

As a culture obsessed with ownership and exclusivity, it comes as no surprise that the digital art market found a way to monetize its assets and its artists.

“It’s just really great to see all the people that NFTs have given the opportunity to make incredible livings,” Miller said. “I’ve never had people value my art in that kind of way.”