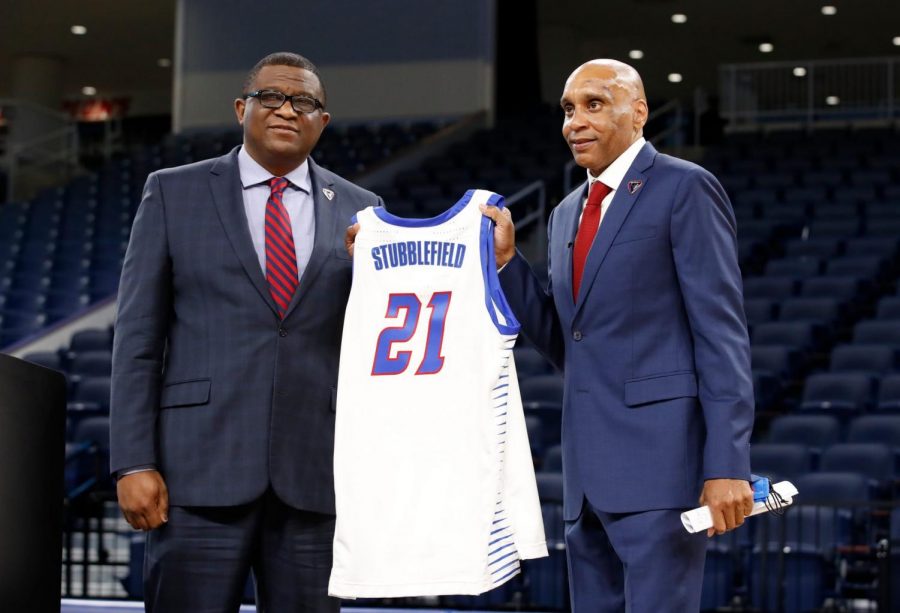 Ironically enough, however, the Blue Demons needed a team to lose in the NCAA Tournament this year. In order for DePaul to hire Tony Stubblefield, it needed Oregon to bow out of the tournament early on so they could do an in-person interview with Stubblefield.

“I didn’t want Oregon to lose to be the reason we are here today, but it gave me an opportunity because, say Oregon got to the Final Four, I don’t know if we are here today because I don’t know if I could have waited enough to not know what the situation was going forward,” Peevy said during Stubblefield’s introductory press conference on Wednesday.

The Blue Demons’ wish was granted. Oregon lost to USC in the Sweet 16, freeing up Stubblefield to travel to Chicago to meet with DePaul’s brass. The Ducks got back home from Indianapolis a day after losing to USC, but Stubblefield was back on a plane to the Midwest a couple of hours later — this time headed to what would eventually become his new home. .

“But I think right away when [Stubblefield] got in front of me, [President A. Gabriel] Esteban, Steve Stoute and the DHR team in Chicago, I knew that he was the right person for this job,” Peevy said.

DePaul officially hired Stubblefield on Tuesday, making him the 15th head coach in program history. Stubblefield spent the previous 11 years as an assistant coach at Oregon, where he helped the Ducks make the NCAA Tournament seven times and the Final Four in 2017.

This decision holds even more weight for Peevy, who’s in his first year as DePaul’s athletic director. This is the first time that he’s made a head coaching change and led the searching process.

Prior to coming to DePaul, he spent 12 years at Kentucky, with the last seven serving as deputy athletic director. He oversaw the men’s basketball program and worked closely with head coach John Calipari.

Peevy said on Wednesday that he thought the hardest part would be the press conference after firing Leitao. Instead, the most difficult part, according to Peevy, was the entire search process for a new head coach.

“It’s like making the decision of marriage, but you have got to speed date and maybe get to know somebody in two weeks,” he said. “That’s why I’m really glad that I did more of an inclusive search to not just jump into my first impression or thought process. A lot of people thought maybe I wasn’t even running a real search.”

In total, Peevy said he talked to 37 coaches in the last three weeks. Throughout this entire process, he and the DHR International team — a search firm that helped DePaul pick out potential candidates —  made sure to vet Stubblefield before offering him the job.

There was a situation in 2014 when three Oregon men’s basketball players  —  Dominic Artis, Damyean Dotson and Brandon Austin — allegedly gang raped a female Oregon student. The investigation detailed an extensive and graphic police report. The case was eventually dropped by local law enforcement, but all three players were later dismissed from the university.

Stubblefield said in 2017 that he helped recruit these players and admitted to still exchanging messages with them three years after they were kicked out of the program.

Peevy said that DePaul made sure to vet each candidate as it got down to a shorter pool of coaches. DePaul and the DHR team looked into this case to make sure that Stubblefield would still be an ideal candidate.

This will be the first time that Stubblefield will be the head coach of a college program. As an assistant, he became known as a strong recruiter. Oregon had five top-12 recruiting classes during Stubblefield’s time there.

“[Recruiting is] one avenue that I think DePaul can have an edge, and there’s a chance for us to have the best players in the conference,” Peevy said.

“I have no doubt that he will get that thing turned [around], and I think he will do it quickly here within the next couple of years,” Altman said on Friday. “I think DePaul really [will] be a much different team and a lot tougher out than what they’ve been the last couple of years.”

The challenge now begins for Stubblefield to fill a roster that has seen a total of eight players leave the program since the season ended — seven transfers and Romeo Weems declaring for the NBA Draft. The transfer portal is filled with over 1,000 names and it might be the best path for the new head coach to build his first team.

“We obviously got to start recruiting and recruit very hard, with the transfer portal being as it is with transfers being eligible immediately, I definitely think we are going to look at that route,” Stubblefield said. “We are going to look at the high school route, so I’m not going to eliminate any options at this time. I’m just looking forward to putting the best roster that we can put together to be very competitive in the Big East next year.”