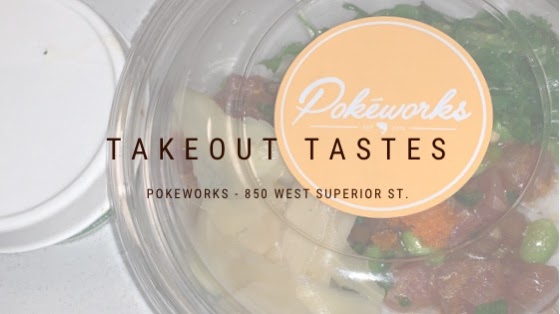 Overtime, poke has grown in popularity in the United States. Chicago is no stranger to this phenomenon. As a huge fan of poke, I was really excited to order an ahi tuna poke bowl from Pokeworks and give it a try for the first time.

I started my meal with the miso soup I had ordered, which wasn’t my favorite. The soup lacked developed flavors and quite literally tasted like hot water. The delicious flavor of miso was missing, and the soup housed only a few cubes of tofu and a few sheets of seaweed. I pushed my soup aside and gave the poke bowl the floor — perhaps this would save my meal?

I built the poke bowl myself, which consisted of Ahi tuna, edamame, green onion, masago, pickled ginger and seaweed salad, topped with sriracha aioli and sweet shoyu. The flavors in the bowl itself were yummy, but the portions were severely off. I enjoyed the seaweed salad; I found it to be well seasoned and added that delicious sesame oil flavor I adore in my seaweed salads.

The tuna was fresh and paired well with the other additives in my bowl. Although the flavors were pretty good, for $20, I expected a lot more food than I received. The entire portion I received was simply not enough food to fill me up or even leave me satiated — especially after passing on finishing the miso soup.

Overall, my experience at Pokeworks was 2/5 stars because of the lacking miso soup and skimpy portion sizes that don’t match the price. I think there are some much better poke places in the city that I will be going to instead.