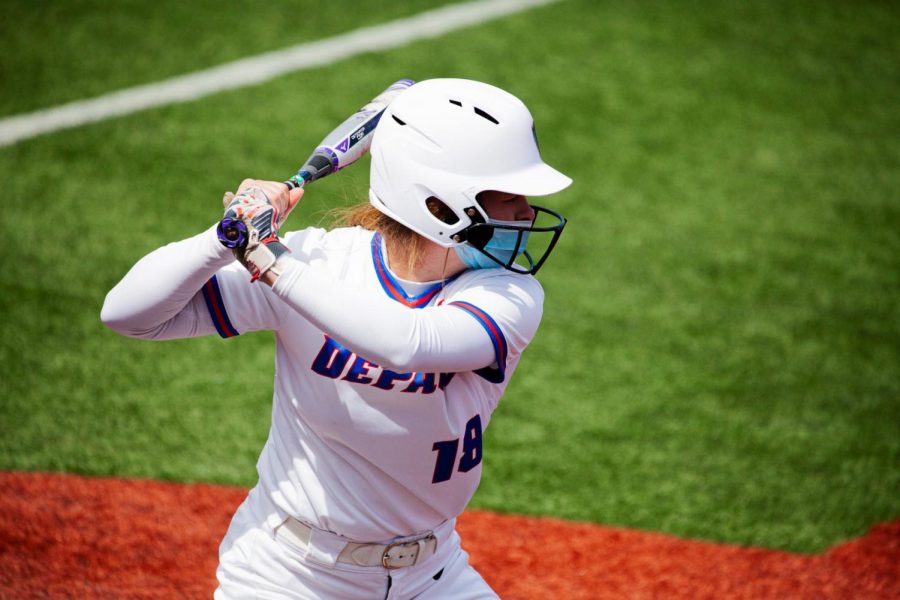 The weekend series at Cacciatore Stadium pitted DePaul against Creighton, with both teams sitting in the top three in the Big East standings.

The Blue Demons took care of business and showed why they sit atop the standings, winning all three games to complete their third sweep of the season.

Led by starting pitcher Krista Dalgarn, DePaul took the first game of a doubleheader, 6-0, on Saturday. Dalgarn threw a complete game shutout, striking out six, to improve her record to 10-2.

But the offense did its part as well. A three-run first inning set the tempo for DePaul. With the first two batters of the game reaching base, Brooke Johnson singled to right to drive in Angela Scalzitti. Skylor Hilger and Gabby O’Riley followed up with back-to-back singles to drive in two more runs.

Scalzitti, Polucha, Hilger and O’Riley all finished the game with two hits apiece.

DePaul also came away with the win, 4-1, in the second game of the doubleheader.

The Blue Demons tallied two runs in the third to open the scoring. Jessica Cothern walked with one out and Johnson followed it up with a two-run home run, which gave her three RBIs in two games.

In the fourth, Nicole Sullivan provided some insurance as she belted the first home run of her collegiate career to make it 3-0. After Creighton got a run in the sixth, Sullivan delivered a two-out double to right center in the bottom of the inning to get that run right back. She went a perfect 3-for-3 and knocked in two runs.

Natalie Halvorson tossed 5.2 innings of one-run ball, scattering three hits while striking out eight, to improve her record to 6-4 on the season. Dalgarn closed out the game to earn her first save of the season.

DePaul completed the sweep in style in Sunday’s finale. But they had to play a little catch-up first.

In what turned out to be the turning point of the game, Dalgarn got Creighton’s Kailey Wilson to ground into a double play and get out of the inning unscathed.

The momentum was now on DePaul’s side and they made the most of it. With Cothern on base, Maranda Gutierrez finally got in on the action with a two-run home run that gave DePaul the lead.

The Blue Demons put the exclamation point in the bottom of the fourth after Creighton managed to tie the game, 2-2.

With the bases loaded and one away, Cothern smashed a comebacker right to the pitcher to drive in Grace Frazier. Scalzitti then scored the fourth run on a fielder’s choice by Johnson. WIth the bases still loaded, Hilger walked to force in a run. O’Riley was then hit by a pitch to score Johnson.

It was like death by a thousand cuts from DePaul’s offense. That is, until Sullivan stepped up to the plate. She already had four hits in her last four at-bats. But she saved the best for last as she put the game completely out of reach with her first career grand slam to straight-away left field to put the Blue Demons ahead 10-2.

Up by eight, Creighton had one last chance to extend the game in the fifth. Despite getting runners in scoring position, Halvorson, who was brought in to relieve Dalgarn, shut them down to pick up the win.

This was DePaul’s third Big East sweep of the season and improved their overall record to 19-9, 10-1 in conference play, to remain atop in the standings.

The Blue Demons’ next game is on Wednesday when they travel to Indiana to take on Notre Dame.