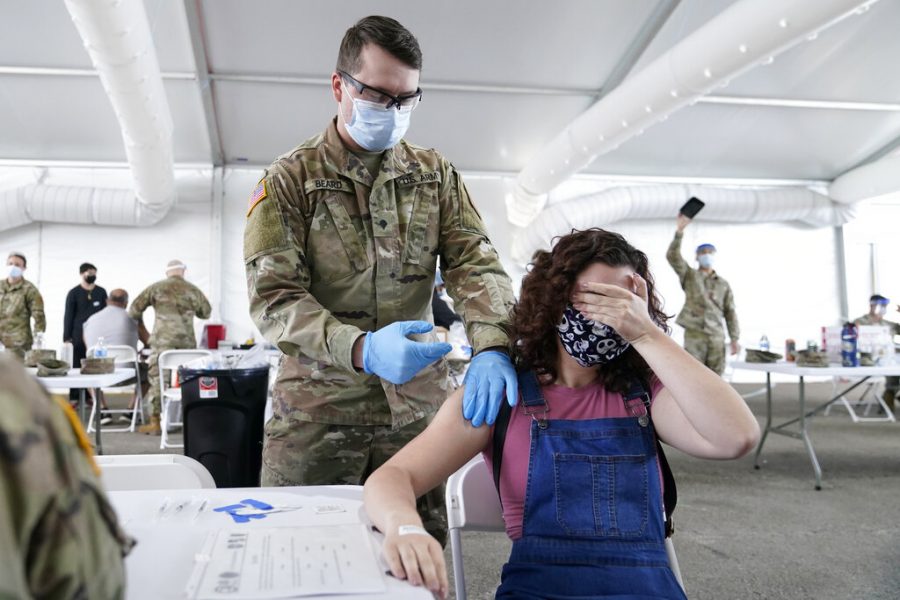 FILE - In this April 5, 2021, file photo, Leanne Montenegro, 21, covers her eyes as she doesn't like the sight of needles, while she receives the Pfizer COVID-19 vaccine at a FEMA vaccination center at Miami Dade College in Miami. In the U.S, meanwhile, more than one-fourth of the population — nearly 90 million people — has been fully vaccinated and supplies are so robust that some states are turning down planned shipments from the federal government. (AP Photo/Lynne Sladky, File)

For most Americans, the possibility of contributing to the more-than 565,000 Covid-19 deaths in the U.S. is more than enough to instill fear of the ongoing Covid-19 pandemic.

For many others though, a greater fear lies in the one thing that could end it.

As over 42 percent of all Americans have received at least one Covid-19 vaccine dose and cities like Chicago open eligibility to all residents 16 and older, more people actively seeking out a vaccine are getting one –– a crucial step in the nation’s efforts to reach herd immunity. However, while vaccine manufacturing and distribution have begun to catch up to U.S. demand, many experts fear that the demand may not currently be significant enough to reach herd immunity.

“If we end up with a situation where the [vaccinated] population is not quite where we can stop the virus through induced immunity, then we’re in a bad place,” said Sasha Gutfraind, a biostatistician and adjunct professor at the University of Illinois at Chicago.

While it’s not currently clear exactly how many Americans must obtain resistance against Covid-19 for the U.S. to reach herd immunity, estimates range from as low as 60 percent to as high as 90 percent ;as of April 24, 42.8 percent of Chicago residents have received at least one dose, with 28.4 percent having fully completed their vaccination. A failure to reach that threshold would not only allow the virus to continue spreading throughout communities, it would also allow it to continue mutating, likely spawning more dangerous variants that existing vaccines may not be able to combat as effectively.

“The virus can mutate and become more and more effective at infecting people,” Gutfraind said. “By not slaying the beast, we’re letting it grow stronger.”

According to a study from Pew Research Center, 30 percent of U.S. adults say they either probably or definitely will not get a Covid-19 vaccine. Within this population, the most cited reasons for distrust in the vaccines were concerns about side effects, the belief that the vaccines were developed and tested too quickly and a desire to know more about how well they work. Several anti-vaccine conspiracy theory organizations, such as the National Vaccine Information Center and Children’s Health Defense, promote these beliefs through pseudo-scientific claims and false correlations.

Despite these concerns, chemist and attorney Dean Fanelli told The DePaulia that there is sufficient evidence showing the safety and effectiveness of the available vaccines.

“Although these trials were done quickly because we’re in a pandemic situation, they were done with safety and efficacy as the utmost importance, and they were done in accordance with the FDA’s protocols,” Fanelli said. “To be clear, although the protocols were sped up, it’s not as if they eliminated any of the requirements. They just sped them up.”

An additional obstacle in building vaccine confidence came on April 13, when a joint statement between the Food and Drug Administration and the Centers for Disease Control and Prevention effectively halted U.S. administration of Johnson & Johnson vaccines in order to assess six cases — later found to be 15 cases — in which a rare and severe type of blood clot occurred after receiving the vaccine.

While the FDA and CDC ultimately lifted their recommended pause of Johnson & Johnson vaccine administration on April 23 after determining that the benefits of vaccination outweigh the vaccine’s risks, it may be significantly more difficult to convince an already wary public of the vaccine’s safety.

In a recent Harris poll a majority of respondents said they would not take the Johnson & Johnson vaccine, regardless of whether federal regulators deemed it safe. Additionally, 62 percent of those who were already vaccine hesitant said their confidence in overall vaccine safety dropped as a result of the publicity surrounding the Johnson & Johnson blood clot incidents. Fanelli suggests that turning away from vaccines for these reasons would be misguided, and that doing so without comparing the risk of not getting vaccinated at all would likely do more harm than good.

Both civilian and government groups have been making significant efforts to reach those still unsure of whether they should get vaccinated. The Biden administration has stated that it’s investing $3 billion to increase vaccine confidence in “the highest-risk and hardest-hit communities.”

DePaul will require all on-campus students without a valid medical or religious exemption to be vaccinated for COVID-19 before the 2021-22 academic year begins.

No decision has been made on whether DePaul will require employees to be vaccinated. Between April 27 and April 30, DePaul will host a Moderna vaccine clinic in the Lincoln Park Student Center. To schedule an appointment, students can follow the link sent to their email account.