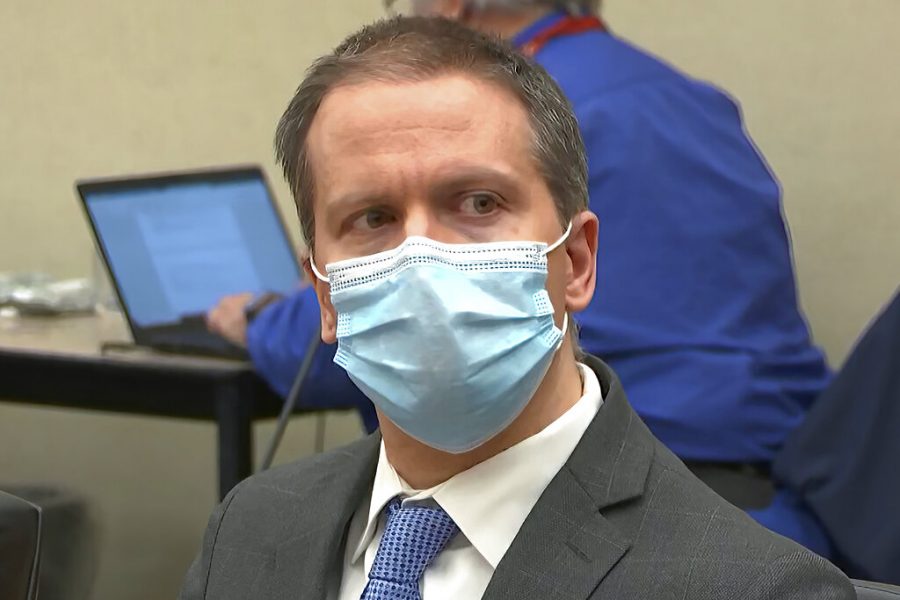 FILE - In this image from video, former Minneapolis police officer Derek Chauvin listens as the verdict is read in his trial for the 2020 death of George Floyd, Tuesday, April 20, 2021, at the Hennepin County Courthouse in Minneapolis. On Friday, April 30, The Associated Press reported on social media posts sharing a fabricated screenshot last weekend that purported to show the Chicago Police Department tweeting in support of Chauvin, who was convicted for the murder of Floyd. The department sent no such tweet. (Court TV via AP, Pool, File)

On April 20, 10 months and 26 days after the murder of George Floyd by former Minneapolis police officer Derek Chauvin sparked the largest protests in U.S. history, a Minnesota jury found Chauvin guilty on counts of second-degree unintentional murder, third-degree murder and second-degree manslaughter — the first time in Minnesota history that a white cop was convicted for killing a Black man.

While the verdict granted millions of U.S. and international citizens a sigh of relief and a sentiment of accountability, the verdict alone likely cannot and will not constitute a significant change in police accountability moving forward.

The one aspect of Chauvin’s trial that stands out is the degree to which members of the Minneapolis Police Department (MPD) cooperated with the judicial system in order to provide a more functional court proceeding. I don’t wish to understate the importance of this: Due to the pervasiveness of the blue wall of silence across U.S. police forces, it is genuinely notable that several officers — including the MPD’s chief of police — testified against Chauvin’s actions that led to Floyd’s death.

‘Since the trial, 70 people have been murdered at the hands of law enforcement’ — Rep. @AyannaPressley explains why the Derek Chauvin verdict is only one small measure of accountability in a much larger fight pic.twitter.com/rObFOFYMLH

However, it will take more than one isolated, high-profile instance for me to believe that American policing has relinquished its Mafia-esque code of silence once and for all. Amid recent efforts ranging from police reforms to disbanding MPD entirely, it was in the police department’s best interest to distance themselves from Chauvin’s actions, using him as a sacrificial lamb in order to minimize subsequent flak from constituents and city council members alike. Treating Chauvin as an anomaly allows the MPD to dismiss their own culpability.

Furthermore, the fact that one instance of law enforcement enforcing the law against their colleagues is something to applaud as opposed to a commonplace occurrence is, in and of itself, indicative of fundamental flaws in America’s policing institutions that one man’s arrest cannot solve. When there is an extensive chain of lower-profile cases in which members of the police testify against their fellow officers, then and only then will I be convinced that any worthwhile dent in the blue wall of silence has been made.

That’s not to say that the U.S. can sufficiently address its habitual lack of police accountability solely through the normalization of police testimonies, though.

Qualified immunity — a legal doctrine that protects government officials (including police officers) from accusations of civil rights violations — serves as one of the most significant roadblocks in efforts to hold police accountable for their misconduct.

In order to successfully charge a police officer of wrongdoing, the doctrine requires a victim to prove both that a civil rights violation has been committed and that a preexisting case involving comparable context and conduct has made such a violation “clearly established” in the eyes of the law.

While this alone allows police officers to legally violate the constitutional rights of Americans as long as no similar case has been decided, a recent Reuters investigation showed that courts across the U.S. are increasingly deciding not to determine whether officers violated the plaintiff’s constitutional rights, allowing future unlawful officers to avoid prosecution by failing to establish a new precedent.

“If all of this is necessary to convict a former officer, convictions will remain rare—and reform will have to take place outside of the courts.” https://t.co/t3TcEiopDM

Simultaneously, the investigation found that courts’ criteria for a “clearly established precedent” have grown increasingly rigorous, often requiring near-identical scenarios between cases in order for litigation against police to succeed.

For example, in 2014, Tennessee officer Brad Bracey released attack dogs on burglar Alexander Baxter after he had surrendered, sitting on the ground, with his hands up. While an earlier case in which attack dogs were sent at a civilian who had surrendered lying on the ground did set a legal precedent, a federal court dismissed Baxter’s case in 2018, noting that while officer Bracey broke the law, the slight difference in the victim’s positions was enough to differentiate it from the previously set precedent. Bracey faced no penalty for his crime, and in 2020, the Supreme Court denied a petition to revisit the case.

The continued use of qualified immunity to protect law-breaking officers not only creates a monumental obstacle when attempting to hold officers accountable, it also may embolden officers in future public encounters. By allowing charges against police officers to prevail only if another officer committed a nearly identical act and was found to have violated their victim’s civil rights, qualified immunity promotes a “shoot first, ask questions later” approach to policing, disgracing the constitutional rights of Americans and putting innocent lives in danger.

Proponents of qualified immunity have long argued that ending the doctrine would hinder officers’ efforts to properly do their job by forcing them to consider the possibility of litigation during quick-response moments. However, the continued tolerance of police-perpetrated attacks on civilians showcases how qualified immunity itself has hindered police efforts to protect and serve the people by creating a nearly untouchable enemy from within the policing institution.

Unquestionably, the guilty verdict against Derek Chauvin was a clear-cut case of police accountability and a rare instance of officers stepping around the blue wall of silence to testify against their badged cohort. However, I cannot reasonably equate the indictment of one cop to the overhaul of deep-seated systemic failings in the American criminal justice system. While there is a great need for the United States to create a system of policing in which officers’ misdeeds do not go unaddressed, much more must be done to reach that goal. The push for police accountability does not end with Derek Chauvin.