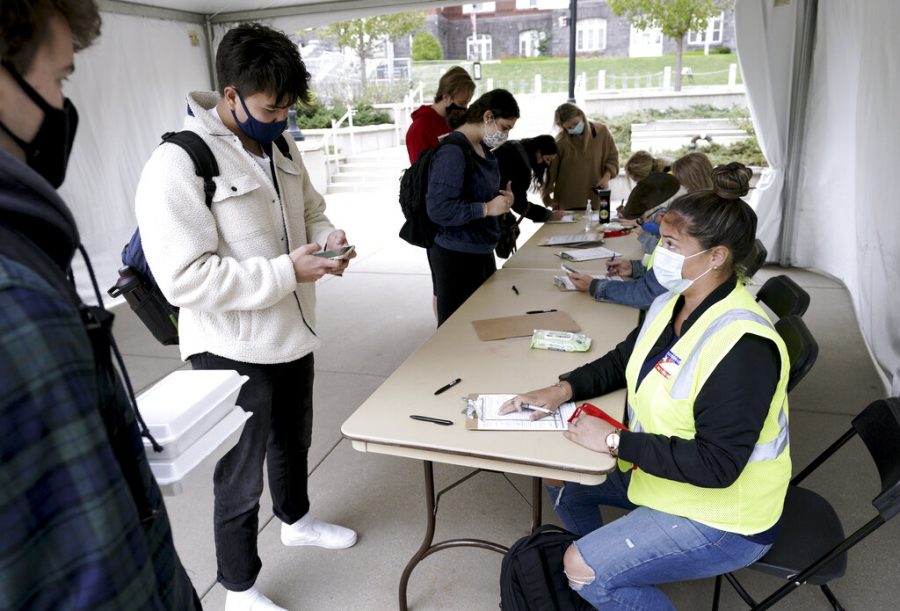 FILE-Elizabeth Quirmbach, right, registers Ayuka Sinanoglu, center, a Sophomore at the UW on Wednesday, Oct. 19, 2020 outside of the UW Memorial Union in Madison, Wis. A small but steady stream of masked UW-Madison students stopped by voter registration tables outside the unions last week to perform their civic duty. Madison City Clerk’s office employees helped them through the paperwork, sanitized their used pens and talked among themselves as they waited for the next students to filter into the fairly empty tents.(Steve Apps/Wisconsin State Journal via AP)

In a widespread response to the unsubstantiated claims of election fraud following the 2020 election, legislators have introduced 361 bills with restrictive voting provisions in 47 states. Of these, five restrictive bills have been signed into law, 55 restrictive bills are moving through legislatures, 29 have passed at least one chamber and 26 have had some sort of committee action according to the Brennan Center, a nonpartisan law and policy organization.

In Georgia, a law passed criminalizing the provision of food or drinks to voters waiting in long lines. This law may prove to have detrimental repercussions for voters in Georgia, as there were reports of early voting poll lines having wait times upwards of 10 hours in the 2020 presidential election.

Supporters of this law, like Georgia Secretary of State Brad Raffensperger, told the Washington Post that the practice of offering aid to those in line encourages illegal campaign activity if volunteers are using the aid to advocate for their candidate. The stance of the opposition is generally rooted in fear of discomfort that accompanies long wait times.

As this measure has the ability to affect people’s decision to wait in long lines to vote, or even whether or not to vote in general, some opponents feel that it directly impacts the founding principles of the United States.

“Our country was founded on being able to give everyone the right to free speech and to vote,” said Sheridan King, a democracy fellow for Campus Vote Project and junior at Mercer University in Georgia. “If you take that away, you are targeting a specific group and we are no longer standing on our founding principles.”

In the GOP’s push toward more restrictive voting laws, one of the demographics negatively impacted is college students. Restrictive provisions that target absentee voting, voter ID requirements and shortened early voting all significantly impede students’ ability to vote. As voter ID requirements become more exhaustive, students’ access to these documents generally declines; this can translate to students having to take time off work or school to go get the documents, or it can completely dissuade students from participating in the election cycle. Shortened early voting restrictions discourage anyone who can not take off work or school as needed, as this most often refers to the closing of polls at 5 p.m. instead of 7 p.m., or later in some counties.

“Efforts to try to limit or block who can absentee vote or the accessibility of voting is a big hindrance on students, especially students of color or students of disadvantaged economic backgrounds,” said Janae Steggall, a democracy fellow for Campus Vote Project and senior at the University of Texas at Austin. “Oftentimes, you cannot take off work or plan around work or school to vote in person. All of these things affect students because we are young voters, and we are transient; they all serve to either directly limit students’ ability to vote or discourage students from voting.”

Illinois is not currently facing the passing of any voter restriction legislation, so there is not a localized fear of voter restrictions as they affect student voters registered in Illinois. But it is important to note how stressful voting can be, especially for voters only recently acquainted with the system. Students struggle with understanding how to vote, especially if they are out-of-state students or from a different county.

Part of the stress of voting in an election as a student could be remedied for DePaul students if the DePaul administration were to approve of a sanctioned voting center on campus. Unfortunately, the university has been consistent in its inaction, according to politically active students and professors.

“Some college campuses are in themselves a precinct,” said Christina Rivers, a political science professor at DePaul. “Student organizations have tried to make this happen at DePaul and have failed. To have your college create a precinct, sends a whole different message about the importance of voting. It encourages it. I encourage DePaul to do this.”

The group that originally attempted to bring a voting center to campus, I Matter Political Activism Can Too (IMPACT), was a nonpartisan political activism organization that is no longer considered active. The torch has since been passed down to Grace Siegelman, a senior in the Peace, Justice, and Conflict studies program and member of Students against Incarceration.

“About two years ago, we had a couple pushes with Students against Incarceration to make DePaul a designated voting center,” Siegelman said. “The closest place currently is the Chicago Library, which most of the time has a line down the block during elections. We wanted to make it more accessible to students who were voting for the first time or who didn’t have a lot of time to vote; to be able to just stay on campus and cast their ballot. A lot of times we would have an entire presentation, we would discuss the outcome and how to proceed, and they would take us through the entire process before saying no; it never came to fruition.”

Director of Student Involvement at DePaul, Courtney James, issued a statement in response to Siegelman’s claims, saying that DePaul does offer voting on campus. James specifically cited the use of the Sullivan Athletic Center as a place for students living in residence halls to vote on Election Day, and DePaul’s ownership of the building that houses the Chicago Public Library, an early voting site, in Lincoln Park.

“Over the past few years, DePaul has been increasing our efforts around voter registration and engagement,” James said. “DePaul was recently awarded the Voter Friendly Campus designation.”

For some, DePaul’s efforts are the bare minimum; while not up to par with the implementation of an endorsed voting center, as student organizations continue to request, there is also very little knowledge available on the voting page provided by James.

There is a program available within the Illinois Board of Elections that gives schools the opportunity to create a registered voting center on campus, making it easier for students and faculty to place their ballots.

“I find it very interesting that a university campus that prides itself on promoting civic engagement won’t agree to do this knowing that there is a program in the Board of Elections that will help schools do this,” said a member of DePaul’s faculty who asked to remain anonymous.

Correction (5/7/2021): A previous version of this story listed Janae Steggall’s last name as “Stegall.” The story has been updated to reflect the correct spelling.