Illinois sees a massive population decline in the last decade, will lose one congressional seat 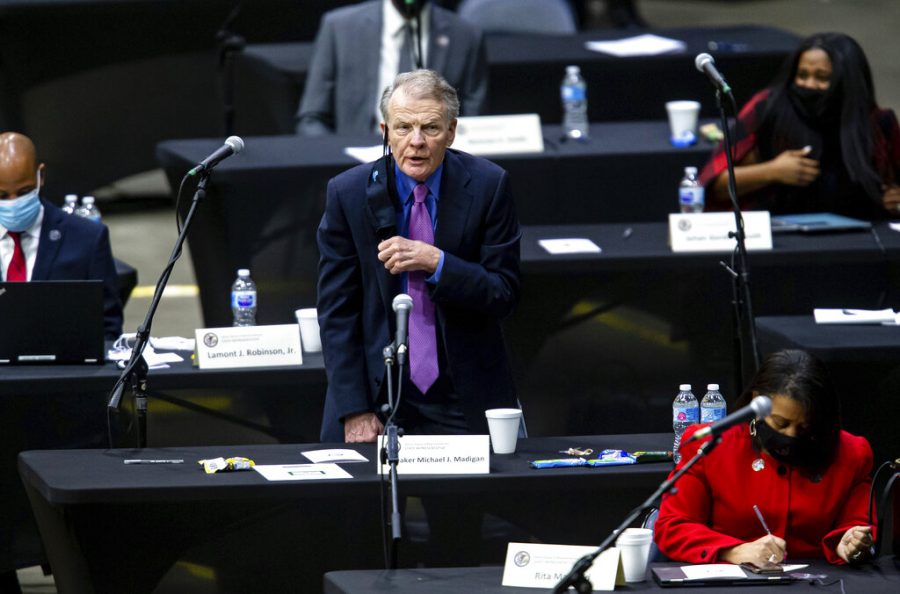 FILE-Illinois State Rep. Michael Madigan, D-Chicago, casts his vote for Illinois State Rep. Emanuel "Chris" Welch, D-Hillside, to be Illinois Speaker of the House as lawmakers cast their votes for the 102nd General Assembly for the Illinois House of Representatives at the Bank of Springfield Center, Wednesday, Jan. 13, 2021, in Springfield, Ill. (Justin L. Fowler/The State Journal-Register via AP)

Illinois will lose one congressional seat in the House of Representatives due to a population decline of more than 18,000 people, according to census data announced earlier this week.

According to the census data, Illinois was one of three states to lose population over the past decade alongside Mississippi and West Virginia. Illinois is among seven states that lost a congressional seat including Michigan, Ohio, Pennsylvania, West Virginia, New York and California.

As a result of the reapportionment, Republicans are set to control the redrawing of 187 districts and Democrats will redraw 75 districts. There are 167 districts that neither party will have exclusive control over and six districts that won’t need to be redrawn at all.

Republicans control redistricting in populous states including Texas, Florida and North Carolina. A FiveThirtyEight analysis says that these states could see extreme gerrymandering due to a 2013 Supreme Court decision that struck down a crucial part of the Voting Rights Act. Under the decision, states do not need preclearance from the Justice Department when redrawing district lines.

Nick Kachiroubas, a professor in DePaul University’s School of Public Service, says that the uncertainty lies in states that use an independent commission to redraw district lines.

“If some of the Republican states use the commission forum, the independent commission, it may not be to the Republicans’ advantage,” Kachiroubas said. “So in that case, overall, it could be a Democratic gain.”

According to earlier census estimates of the data, Texas and Florida were set to see even bigger congressional gains. Though Republicans are expected to hold the political advantage in redistricting as a result of the census data, Kachiroubas says that the mindset of voters moving to Republican-leaning states should be taken into account.

“You have to think about the mindset of those voters relocating … there is also the opportunity for some of those potentially very red states to become a little bit more purple,” Kachiroubas said.

Kelly Ward Burton, executive director of the National Democratic Redistricting Committee, told The Washington Post that some of the growth seen in Republican states could be attributed to Democratic voters moving to states such as Florida and Texas.

“The reason that they are gaining seats is because of growth from voters that tend to vote Democratic,” Burton said. “The growth is happening in the Latino community, in the Black community, in the suburbs. It is an increase in young people. If they draw fair maps in those states, Democrats should pick up seats.”

While Democratic-leaning voters may be moving to red states, migration is one of the leading causes of Illinois’ population decline.

Illinois saw the second-greatest population decline, second only to West Virginia. The greatest population decline is occurring in the state’s redder, rural areas downstate. Illinois Democrats have a 13-5 majority in the state’s House delegation. When it comes to redistricting, it is probable that Democrats will aim to preserve that majority, potentially axing a downstate Republican district.

“People aren’t moving from the rest of the country to [the Midwest],” DePaul political science professor Wayne Steger said. “There’s movement between those states, but not much coming from the coast to that center anymore. Basically, there’s not much economic opportunities compared to the South, the Southwest and the West Coast.”

A national migration study by United Van Lines shows that Americans continued to move west and south in 2020. The one exception is California, which accompanies Illinois, Connecticut and New York in higher numbers of outbound migration.

Downstate cities have suffered from the effects of deindustrialization, with increased closures and the movement of manufacturing headquarters to Chicago contributing to the shrinking economies in these areas. Decatur, once one of the largest cities in Illinois, is now the third-fastest shrinking city in the U.S., according to census data.

“So mostly population change reflects the changing economy over the last 50 years and Illinois, specifically, has been on the decline,” Steger said.

The amount of federal relief and support to states is dependent on their population and the worry is that this population decline will impact the state’s allotment of funds.

Robert Kallen, an economics professor at DePaul, says that hopefully the Biden administration will ensure that states struggling from this decline will receive help.

“This is a huge problem and I’m kind of hoping that maybe the Biden administration will be able to put together a package of trying to forgive and take care of certain states that are in our situation,” Kallen said.