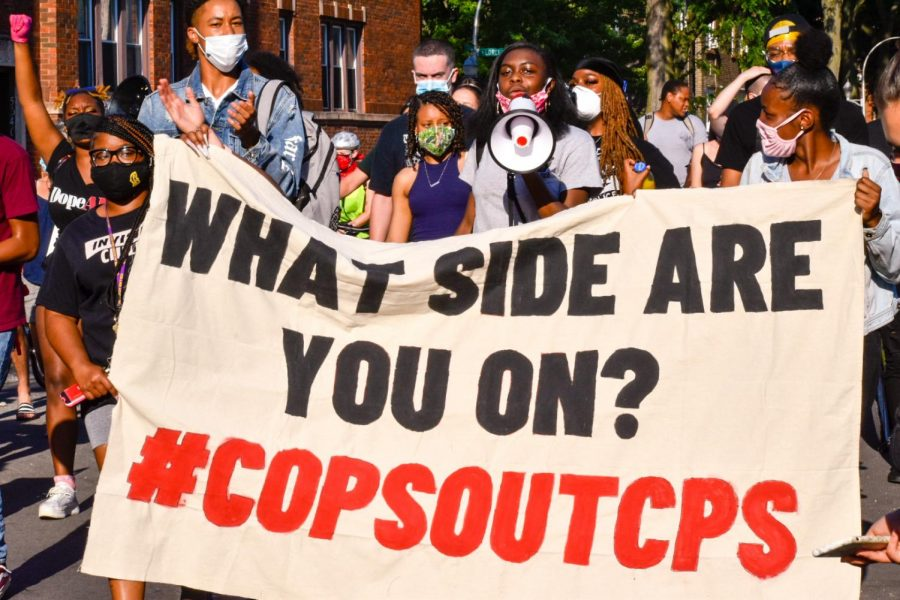 Thousands of protesters march to demand the defunding of the Chicago police and that the police leave the public schools.

Chicago police school resource officers will not be returning to high schools for the remainder of the academic year, according to a letter sent to parents on April 23 by Chicago Public Schools.

“I feel that it was long overdue and it’s a decision that should be permanently instilled within CPS Schools,” said Lissete Estrella, a senior at Prosser Career Academy.

Schools will have the option in the fall to participate in the school resource officer program for the 2021-2022 school year by majority vote from the school’s Local School Council (LSC).

The decision to halt the program is part of a holistic approach to school safety that came from a community engagement effort and was guided by a new resolution from the Chicago Board of Education.

“With less than two months remaining in the school year and reduced daily in-person attendance, we feel that the presence of full-time school resource officers is not necessary at this time,” said Jadine Chou, chief of safety and security for Chicago Public Schools.

The Whole School Safety Committee’s report and recommendations mandate  that the CEO and district leaders have to be in constant communication with schools to identify and recommend an alternative plan for schools not using school resource officers.

“Every CPS school deserves a comprehensive safety plan that is unique to the needs of their community, and our job is to put a plan in place that will make every student feel safe, valued and supported,” Chou said.

CPS principals will be working on a plan that addresses a model for school safety in advance and each school’s individual LSC will vote on the approach this summer. The goal is to provide schools with alternative resources if they choose to opt out of the school resource officer program.

Last August a one-year, $12 million contract between the school districts and CPD was approved in a 4-2 vote with one abstention by seven mayoral-appointed board members. Before the new contract, CPS had a $33 million contract with CPD to provide officers to schools.

According to CPS, 55 schools opted to maintain a police presence, while 17 schools decided to remove resource officers for the 2020-2021 school year.

“Their mere presence enforces trauma on students and conditions us to be criminalized,” said Judai Smith, a junior at Kenwood Academy High School. “The entire policing culture in CPS on students (a majority minority district) harms the mental stability and future for us.”

Smith said that the action to remove the officers with less than two months left of school is “performative and shows no solidarity with Black and Brown students.”

High schools reopened their doors just a week ago, with only 35 percent of students opting to resume in-person learning, according to a CPS survey. No school officers had been working in CPS this school year, with the exception of 22 sergeants assigned to the district.

“Next year I would like to see no cops in school,” Smith said. “It’s that simple.”

Kenwood Academy High School, located in the Hyde Park neighborhood, voted unanimously to retain police through their LSC. Public comments at the council meeting last summer spoke in favor of keeping the officers.

“The decision was not made on any basis besides adultism and internalized racism,” Smith said. “The decision really emphasised for me how this current educational system does not serve the wellbeing of youth but to uphold white supremacy.”

“I felt devastated knowing that even with student testimonies of students who are there each and every day, of students who have had negative experiences with the school resource officers in our school, they failed to make a decision in favor of its students,” Estrella said.

A 2017 report by the Sargent Shriver National Center on Poverty Law reported that CPS paid more than $2 million in misconduct settlements for police assigned to schools.

“Removing school resource officers and putting the money into programs and support groups for students to engage within a healthy manner would be ideal,” Estrella said. “So much of those funds can be used to fund something much more interactive, personal and impactful for students.”