Four years in the making, DePaul men’s tennis gets across through the finishing line to secure first Big East championship 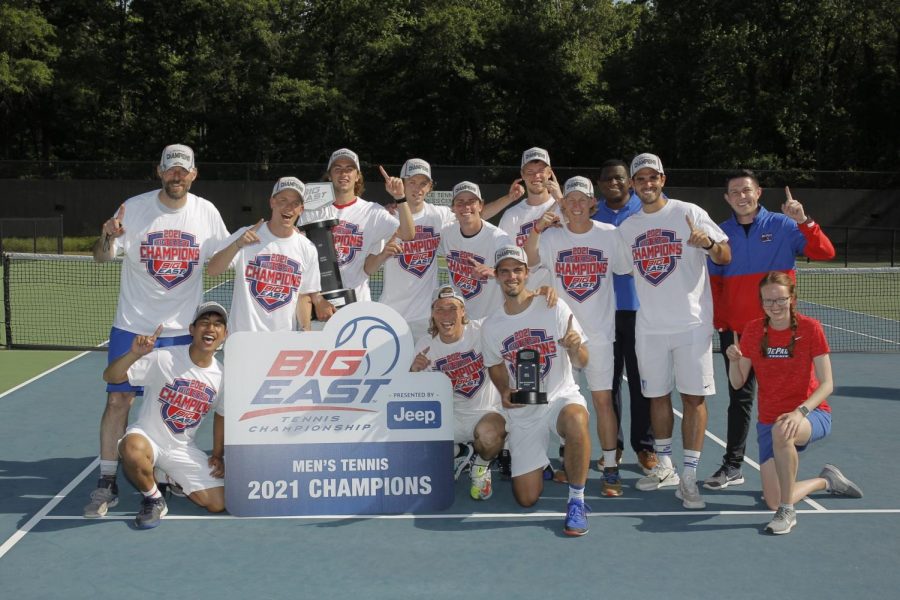 DePaul had a pretty comfortable path to the Big East men’s tennis championship game last week, defeating Georgetown 4-0 in the first round and Butler 5-0 in the semifinals.

Everything was falling into place for the Blue Demons to win their first men’s tennis conference title. The final hurdle standing between them and victory was St. John’s, who previously beat DePaul in the championship game in 2014.

The Blue Demons took a 3-2 lead against St. John’s, putting them one point away from securing the title. Then, St. John’s won the sixth singles match to set up a crucial seventh game between DePaul’s Luke Wassenaar and St. John’s Evan Felcher.

Wassenaar won the first set, 7-5, and then Felcher responded by winning the second set, 6-2, leaving one more set to decide the championship. That’s when DePaul came to the brink of elimination, a thought that was inconceivable after the semifinals.

With Felcher leading the third set 5-4, Wassenaar was facing three match points that he had to stave off or else the championship would go to St. John’s.

“I mean I would lie if I would say I was not nervous and that [Wassenaar] would pull it off at love-forty,” senior Boris Spanjaard said. “I mean it was definitely nerve-wracking, our guys were there and we fought our ass off the whole match and we saw Luke fighting and being down there love-forty. We were hoping for the best.”

Wassenaar had no choice but to keep fighting and deliver the three biggest serves of the season. He powered three serves past Felcher and would go on to win the point that would tie the match at 5-5. Using that momentum to his advantage, Wassenaar never looked back as he won the next two points to win the third set, 7-5.

“I felt the pressure, but I think the reason why it was so comfortable is that I stuck to my basics, to my game plan, to something we have been talking about a lot, it’s just competing,” Wassenaar said. “I wasn’t really thinking about the result and winning, I was just thinking about me competing and that is kind of what kept me calm during those times.”

“I won my serve on 4-5, with four huge serves, and from that moment on you felt like the momentum switching a lot, their players were a lot calmer on the sidelines,” Wassenaar said. “After, I saw they were with their hands on their heads and they were like, ‘What was this.’ And our guys were just going crazy, and that’s kind of what helped me through it as well. I still get goosebumps thinking about that.”

Most of the players from this season’s team were part of the 2018 group that made it all the way to the championship game, but came up short against Marquette — which, at the time, was the third time that DePaul lost in the Big East title game.

Three years later, however, with a majority of the team being seniors or graduate students, they weren’t going to let another chance slip through their hands to make school history.

“Oh man, that was special, for sure,” Spanjaard said. “We came out of our semifinals feeling pretty good, knowing we hadn’t lost any points so far. We were just glad to come back to the final and finally after we have been visualizing it for two years now since we played there last time. Everything just felt right and obviously it was a tough battle, but I think everyone felt this was going to be our year and it finally happened.

It also finally happened for head coach Matt Brothers, who has been at DePaul since 2007 and has fallen short at the similar stage three previous times. He knew that this group had the potential to do something special this year, and it came to fruition on April 26.

“It’s been a long time coming,” Brothers said. “Fourteen years and four finals, so well worth the wait. It’s been an amazing couple of days. I’m just really happy for this group — I mean, not that I obviously would have been happy for our other teams in the past. But these guys worked so hard and overcame so much adversity, and just high-character, high-quality guys that truly deserve this, and [I’m] happy that we just get two more weeks together on a tennis court.”

Like Brothers mentioned, DePaul’s season isn’t done yet. The Blue Demons are heading to their first NCAA Tournament appearance, starting May 7. For many of the players on this team, it will be their last ride together before graduating.

“Honestly, when we get back to practice, I’m going to remind them of things that we have discussed in the past that winning this tournament was not the end-all goal for us,” Brothers said. “These guys recognized a long time ago that we were fully capable of this and more. Our next goal now is to win the next round of the NCAAs, whoever that’s against.