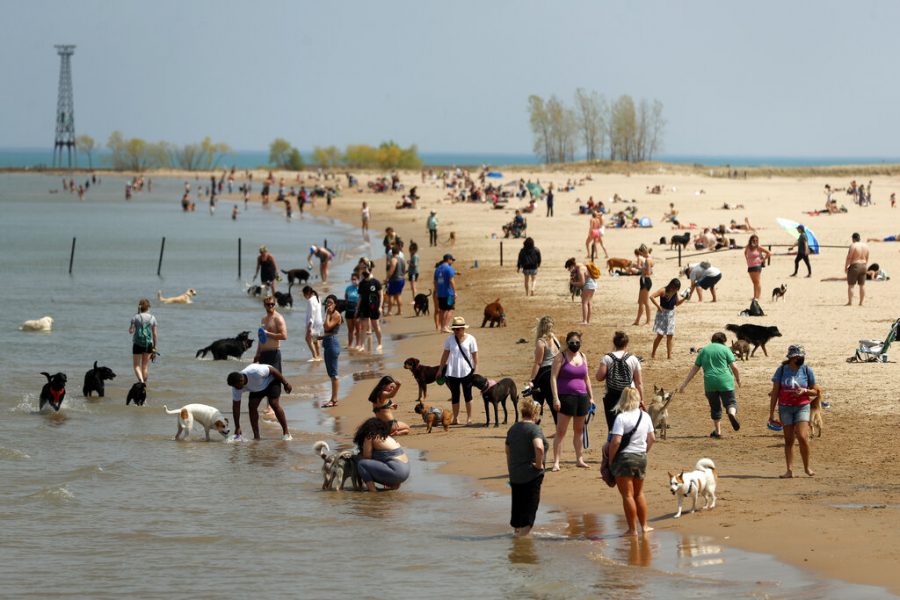 People gather with their dogs in Chicago's Montrose Dog Beach, Tuesday, April 27, 2021. The Centers for Disease Control and Prevention eased its guidelines Tuesday on the wearing of masks outdoors, saying fully vaccinated Americans don't need to cover their faces anymore unless they are in a big crowd of strangers. (AP Photo/Shafkat Anowar)

Mayor Lori Lightfoot announced Wednesday she hopes to fully reopen the city by July 4. As Chicago progresses towards being a city once again filled with baseball games, concerts and restaurant-going, some residents have pushed the vaccine to the side.

NBC Chicago reported from April 12 to May 2, vaccination rates in Illinois have declined by 41 percent. The state is now reaching its lowest vaccination rate in over two months. The initial numbers rushing to get vaccinated have dwindled and state and city officials are trying to encourage residents to change their minds.

For those who originally planned to get vaccinated, many are opting out of receiving their second dose. ​Craig Klugman, a professor of health sciences at DePaul, told The DePaulia in an email that 64 percent of Chicagoans have received at least the first dose of the vaccine, and about 36 percent are now fully vaccinated.

Klugman’s thoughts on individuals not getting the second dose are people willing to take the risk with just one dose instead of having to relive their Covid-19-like symptoms.

“Some 5 million people have made the risk-benefit analysis that one dose is enough for them — scientifically that is not true,” Klugman said. “Others experienced side effects like the sore arm, fever, rash, headache and decided they don’t want to experience side effects again.”

Some DePaul students see refusal to receive a vaccine in the Chicago area as a selfish act.

Hannah Bender, a sophomore from Texas, where the Texas Tribune reports the vaccination supply exceeds the demand, believes some Chicagoans are taking advantage of those choosing to get the vaccine.

“Most of the people eager to get the vaccine did as soon as possible, and now with places opening, anti-vaxxers are taking advantage of luxuries afforded to them because people have been unselfish,” Bender said.

Bender’s entire family has been vaccinated for Covid-19 and she encourages others to do the same.

“Most of my family is in the medical community, so I understand that not everyone comes from a background of being highly informed or trusting medical procedures, but it would be dangerous to encourage ignorance when it could cost people’s lives,” Bender said.

Another sophomore, Jack Matthews, from Denver, Colorado believes people are taking advantage of the fact the city will open with or without their vaccination.

“I think we may see a drop [in vaccination rates] because things are starting to open back up even for people without the vaccine,” Matthews said.

Matthews shared that about one-third of Colorado is fully vaccinated and he and his family members are all vaccinated. He received his first dose from the university and plans to go back for his second.

Though Chicago and Illinois find vaccination rates declining, they still have higher vaccination rates than the national average. Klugman said that national data shows 32 percent of people have been fully vaccinated and 45 percent have received their first dose, with Chicago being above both these percentages.

The vaccination data from the CDC confirms Klugman’s observation. At the time of publication, 45.3 percent of the U.S. population has received their first dose while 33.4 percent are fully vaccinated.

“We are seeing a slowdown of people getting the vaccine and a number of people who do not get the second dose after receiving their first shot,” Klugman said. “The reasons include fear of needles, history of medicine and public health treating minority populations poorly, distrust of medicine and pharmaceutical companies, concerns about the new technology behind these vaccines and most disturbingly people who have bought into a lot of misinformation. There is a lack of vaccine literacy across the nation.”

As we inch towards reopening, citywide Covid-19 cases have been down, maintaining a test positivity rate below 8 percent for 31 consecutive days.

“The numbers are down over the last few weeks — daily cases, hospitalizations, deaths and percent positivity are all down,”  Klugman said.

For the cases that don’t seem to go away, there has been a rise in Covid-19 cases among 18- to 39-year-olds, despite being labeled as a low-risk demographic.

“Some of what we are seeing is an increase in the 18- to 39-year-old range,” Klugman said. “Experts posit that this group believes that it has a low risk of dying from Covid-19, which is true though low is not zero, and just wants to get on and live their lives. We’ve only been vaccinating in this age range for a couple of weeks.”

ABC 7 reported Governor J.B. Pritzker will move Illinois into the Bridge Phase of reopening on May 14 and fully reopen by June 11. But there is still a clear demand to address vaccination rates in the state as well as not ignoring the death toll devastating hundreds of families every day.

He also encourages people to look past just the science and data.